One and only 'Leader'

Peerless administrator, master politician who earned the respect of all, and a CM whose impact on the state ensures, "Leader" K. Karunakaran won public trust for his vision of development and made a remarkable success of it. He left us ten years ago, but there is no excuse for forgetting the lessons he taught us. 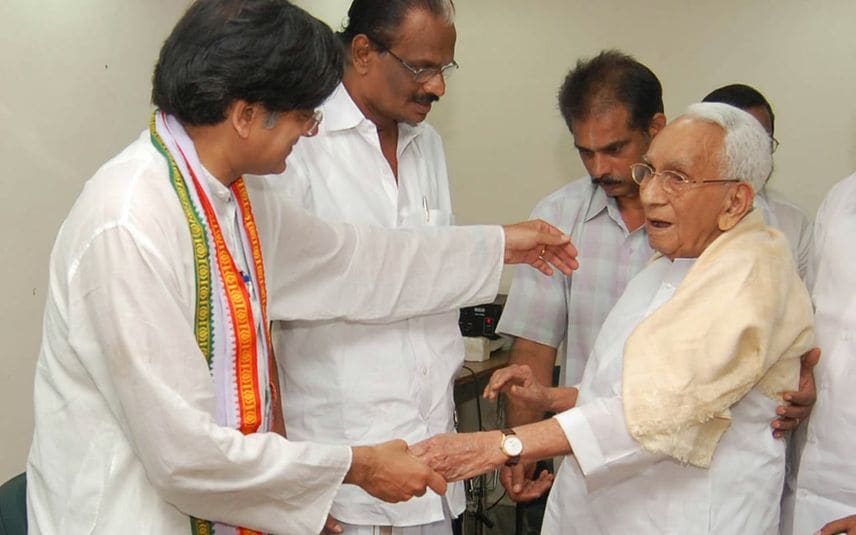 Ten years ago today, former Chief Minister K. Karunakaran left us. Remembering him a decade after his passing, the essential fact remains: while Kerala politics has had many leaders, it has only known one “Leader”. The word evoked – and still evokes – the memory of just one man.

The bare outline of his achievements are known to all. K. Karunakaran served as the Chief Minister of Kerala four times: for a year from March 1977 to April 1977, an even briefer period from December 1981 to March 1982, and finally two solid stints at the helm, from May 1982 to May 1987 and from June 1991 to May 1995. In addition, he founded the United Democratic Front (UDF), making the Congress and its allies a formidable force of governance in Left-leaning state.

He was also a political fighter with few equals. After a career of both achievements and setbacks in his 30s and most of his 40s, K. Karunakaran was allotted a ticket to contest from a Communist stronghold, Thrissur's Mala constituency, considered a “safe seat” for the Left, in the 1965 Kerala Legislative Assembly Elections. To the astonishment of most political observers, 47-year-old K. Karunakaran defeated the Communist candidate by more than 3000 votes, and went on to represent the constituency in seven successive elections: 1967, 1970, 1977, 1980, 1982, 1987, and 1991.

He also revived an ailing Congress Party and made it a formidable fighting force. K. Karunakaran was first elected as the Congress Legislative Party leader in 1967, when Congress was down to only 9 MLAs in the assembly and there were no takers for the job. He rebuilt the party to a credible force at the very time that it had begun its inexorable decline in the neighbouring state of Tamil Nadu, and at a political moment when many assumed it was bound to be reduced to a cipher in Kerala too.

K Karunakaran’s forays into national politics were not always as successful. This included one brief term as Member of Parliament for Thiruvananthapuram, which meant I was able to enjoy the privilege of referring to him as a predecessor. He was kind enough, thanks to the goodwill of National Security Adviser M .K. Narayanan who introduced me to him, to mentor some of my first steps into Kerala politics in 2008-9. I remember many conversations in his Thruvananthapuram home over endless tumblers of “karikku”. I was also privileged to enjoy his blessings in my first election when he officially inaugurated my Candidate Convention and nominated me with stirring speech (that was among his last from a major Party platform).

But there have been other Chief Ministers and political fighters before and after K. Karunakaran. What made him the undisputed “Leader” was that in addition to being a political giant, marked by courage and commitment, he was a peerless administrator, with a vision for his state, clear-headed and decisive in his thinking and actions, implemented without partiality, with sincerity and integrity and without fear or favour. Every bureaucrat and senior police officer who worked under him swears by him to this day as the best boss they have ever had.

It is well-known that K. Karunakaran was instrumental in conceiving, initiating and implementing several infrastructure projects in Kerala that most conventional politicians had considered unfeasible. In his last stint as Chief Minister, K. Karunakaran sanctioned both the Jawaharlal Nehru Stadium and the Cochin International Airport, and more important got them done. Both these projects required daring, imagination and an ability to overcome political resistance and to cut through the bureaucratic maze.

K. Karunakaran took the bold step, in the teeth of Leftist opposition, to initiate the idea of public-private partnership in 1994 in the construction of Cochin International Airport (CIAL) at Nedumbassery, a model of development only emulated a decade later in the rest of India. CIAL was the country's first airport to be constructed on a PPP basis, and there was no shortage of critics who said it couldn’t be done. K. Karunakaran pulled it off; no one else could have. That made him a “Leader” indeed.

This is why upon his passing, I formally proposed that the International airport at Nedumbassery be renamed for K. Karunakaran – not only to honour him but also to inspire admiration for his innovativeness and courage, qualities that Kerala so direly needs. After all, the airport wouldn’t exist without him.

We live in an era where politics is at its lowest ebb; where the politics of identity trumps the politics of performance; and where temples, pilgrimage sites, mosques and love marriages are the battlegrounds for political contestation. What we need is a refocus on what matters to people, and this is why it is essential to recall K. Karunakaran today. At a time when development is the state’s crying need – when its young and unemployed are clamouring for political leadership to fulfil their aspirations – this tragic anniversary reminds us that our late “Leader” was instrumental in proving to all Keralites that we are capable of innovative change.

Peerless administrator, master politician who earned the respect of all, and a CM whose impact on the state ensures, "Leader" K. Karunakaran won public trust for his vision of development and made a remarkable success of it. He left us ten years ago, but there is no excuse for forgetting the lessons he taught us. This anniversary is not just an occasion for sentimental tributes, but for rededicating ourselves to creating once again a developed Kerala that K. Karunakaran always believed was possible.