Of two sunsets, and memories of sun-kissed Kerala and MBIFL ’20 in between 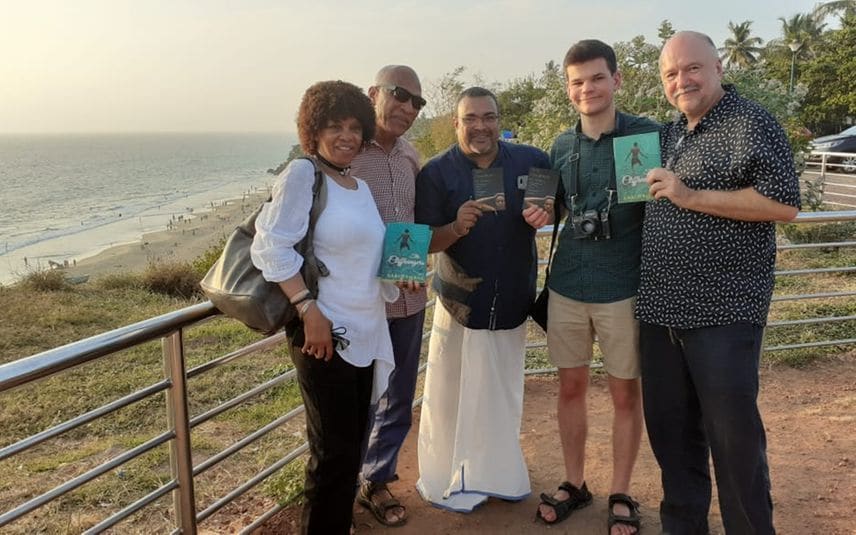 Kiev: Coming back home to 6° C chill threw into incandescent relief vivid memories of our last two days in sunny Kerala, a sliver of land at the southern tip of India. I had been in the state capital of Thiruvananthapuram, as an invited speaker to the 3rd edition of Mathrubhumi International Festival of Letters from January 30-2 February. My son Theo, who accompanied me on his first visit to an Asian country, turned 21 on board the flight from Dubai to Thiruvananthapuram. The carrier, Emirates, were gracious enough to upgrade him to Business Class, a privilege denied to the father!

After the 4-day MBIFL ’20 wound down on February 2; on Tuesday, writer, broadcaster, critic and the chair of the 5-member jury of the Booker Prize for fiction 2020, Margaret Busby; social activist, counselor and consultant on domestic violence, Luke Daniels; Theo and I were driven by the organisers to the world-famous beach and cliff of Varkala, located 25 miles north of the capital. On the way we dropped in on Festival Director Sabin Iqbal’s family home in Kaattaadikkunnu {Casurina Hill}, a mile away from the beach. We were treated to piping hot coffee and a spread of local savories and sweets by his mother Mubeen Ubaid, sister Shaheen ‘Bobby’ Nadeem, teenage daughter and full time cricketer Keziah Miriam Sabin, and nephew Saahil Nadeem.

Then we drove off to the cliff to catch the setting sun. Once there, Luke and Theo were clicking away merrily, when the local reporter of ‘Mathrubhumi,’ S Pratheesh made us fall in line for a news photograph. Sabin, who was accompanied by his childhood friend, Premkumar Raveendran, recounted to us how his debut work of fiction “Cliffhangers,” was set here. He was basking in the glow of having released it in the MBIFL ’20 event by the multi-faceted Dr. Shashi Tharoor with M V Shreyams Kumar, Jt. Managing Director of the ‘Mathrubhumi’ group and our ever solicitous host, receiving it.

Varkala is a place with the friendliest sea! And the cliffs over the sea are beautiful and powerful, making natural protection for the town to look like fortress. The serenity and quietness of the place is very appealing. And the walk along the cliff-edges gives you a magic impression of weightlessness. You get detached from you daily worries and thoughts there. It could be ideal temporary residence for writers where no small news would intrude the thoughts and imagination.

After the sun set at 6.23 p.m., we made our way to Deshadan Cliff & Beach Resort, an elegantly designed spot with tasteful décor and a staff, well-versed in hospitality. Everything was at our beck and call. The fish-themed dinner with king-fish, prawns and squid was quite the treat we had expected it to be. There was also quite an animated discussion on various subjects. The morning breakfast was equally sumptuous. All of us, except Margaret, had an invigorating dip in the Arabian Sea before that.

Sainik School, Kazhakoottam, struck me as an impressive campus with dynamic students and dedicated faculty. The grounds on top of the hill are open to the winds and nature. My session on ‘Why I write,’ was held ‘Under the tree,’ alongside a steep cliff with the cityscape affording a panoramic backdrop; reminding me of an eponymously named hall in MBIFL ’20. The cadets, all 35 of them belonging to the Xth and XIth standards, were so attentive. Afterwards, everyone had a question. Sonya R, {Head of Dept.-English} Dr. George P I {Head of Dept.-Hindi} and R Sandhya {Head of Dept.-Malayalam} coordinated of the 90-minute programme.

Only one thing made me a bit nervous, which had something to do with me, not the place! I had come wearing baggy holiday trousers and in company of nattily dressed cadets and their teachers and commanders I felt the difference between notions of comfort and duty! I remember the scene of duty when I was in the army in Odessa and suddenly these memories of army and its strict regimentation came back. Eating for lunch what was also given to cadets made me feeling happy! Vice-Principal Wing Commander Alka Chaudhary, immaculately clad in air-woman’s uniform and Registrar, the genial Captain K M Breeze Antony turned out in naval white, too lunched with us. They explained to me the male-only school will enroll girl cadets from next year on. At present, there are 17 girls, children of staff members studying as day scholars. Earlier, the Principal Colonel V K S Rawat had officially welcomed us.

Afterwards, we motored to Kanyakumari, the southernmost tip of India, and the confluence of the Arabian Sea, Bay of Bengal and the Indian Ocean. The geopolitical sunset inspired more introspection than watching and seeing. Actually being there, at the confluence provoked thoughts of limits and limitations. People love to stop at the end, to reach the edge of the earth. This is one of such places which lure you to come and to stop. Sunset adds dramatic touch to any thought you might have there. Ideal place for contemplation of your inner self and the world around!

Since all of us wanted spices, at the intervention of the ‘Mathrubhumi’ Nagercoil reporter, T Jayamohan, we were met by Ignatius Tagore, local reporter for News J channel. He helped us procure all our needs in a shop run by Kollam-native Nizar. From there, we made the 3-hour drive back to Thiruvananthapuran, and had a farewell dinner in the spotlessly clean ‘Mathrubhumi’ canteen. Here, I have to mention that all our breakfasts were had here too, since I wanted Theo to savour the amazing culinary skills of master chef, Raamannan. He has been attached to the family of the CMD of ‘Mathrubhumi,’ and my very good friend since 2013, M P Veerendra Kumar, for close on five decades.

This aside on food reminds me of how on Monday evening Theo and I had been treated to finger-licking tasty food at the chain restaurant, Yellow Chilli, by the academic couple of P Vijayakumar and writer-wife, Khyrunnisa A, both retired professors of English. Incidentally, Theo had started eating with his fingers as if making up for the lost intimacy with food, which using cutlery engenders. Like last year, this time too they had hosted me in their 9th floor apartment, with a sweeping view of the city.

Ukrainian writer, born in St. Petersburg in 1961, lives in Kiev. He worked for some time as a journalist, spent military time as an Odessa prison warden, then became a film cameraman, writer of screenplays, before making his name as a writer with the 2001 publication in English of ‘Death and the Penguin' six years after appearing in Russian. Author of 21 novels and 11 books for children; he has been translated into 37 languages and published in 65 countries. The English translation of 'Grey Bees' {2018} will be out this year. He is the first Ukrainian writer to make it to the European bestseller list. Literary influences are Gogol, Bulgakov, Kvitka-Osnovyanenko, Kafka, Camus and Knut Hamsun.

His oeuvre casts an ironic, absurd and satirical eye on post-Soviet reality from the perspective of an Ukrainian, Russian-language author, as could be expected of someone having Orthodox and Stalinist ancestors. His approach to history is best set out in his introduction to his latest fiction 'The Bickford Fuse' {2016}, compared to a sort of cross among The Pilgrim’s Progress, Catch-22, Heart of Darkness and The Road, with a dash of Samuel Beckett, when he says: There are nations with great, complex histories, nations that have seen much blood and many tragedies, nations that are so hopelessly bound by their histories that they cannot move forward into the future, or even into a normal ‘present’.

Wife Elizabeth is English of Scottish and Irish decent. Children are Anton, Theo and Gabriella.