Best of the week 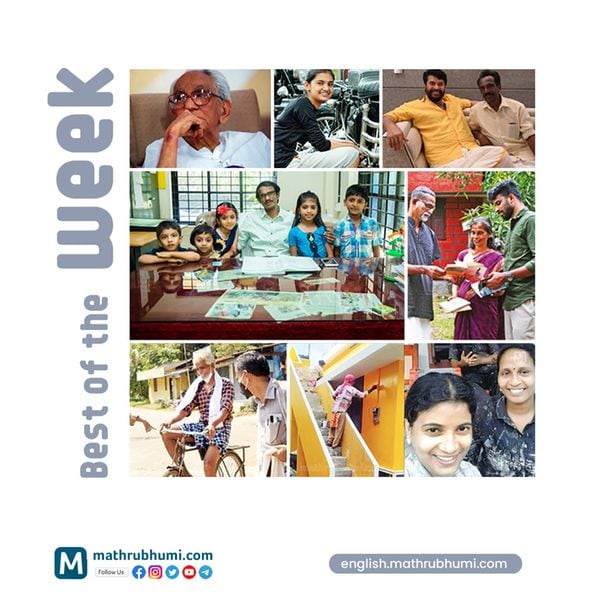 Read the handpicked stories on wonderful people, communities and their lives published in Mathrubhumi English this week.

Have you ever thought of a character in the real life of Mammootty who is similar to barber Balan in the movie ‘Katha Parayumbol’ directed by M Mohanan. Yes, there is a person in his life like Balan. His name is Appukuttan, who Mammootty fondly calls ‘Appuppi’.READ MORE

At a time when his problems began to appear too daunting to Kunhalikkutty, history appears to be repeating. Pooh-poohing his ally Jaleel, Pinarayi has come out against ED probing the co-operative bank scam. READ MORE

A 'Bullet Girl' from Kottayam

Riding a bullet, travelling and experiencing a dream life is often beyond the reach of most teenagers. In the case of a girl, it is nearly impossible in the social circle we grew up in. However, Diya Joseph, a 17-year-old girl hailing from Kottayam, can repair Bullet bikes professionally. READ MORE

Old man gets back his lost companion--a bicycle

The bicycle of Chandran Pillai that went missing on Tuesday was found abandoned on the roadside. The elated Chandran Pillai said that the feeling after getting back the bicycle is like winning a Rs 10 crore worth lottery. He said that he would have quit cycling if he had not got back the lost one. READ MORE

Shashi Tharoor writes on an Australian Who Wanted to be Indian

I asked him once why he wanted to be Indian, and his response was simple: 'I feel Indian,' he said. 'It's the country I love, the place whose history matters most to me, the nation whose aspirations I share. It's India's people I love. It's where I am most comfortable. READ MORE

Despite his busy schedule, KA Pradeep, a 56-year-old auto rickshaw driver from Cherai near Kerala’s Kochi, is keen about spending time for reading books. He plies his vehicle near Shiva Temple in Ernakulum and always keeps a book in his bag. Recently, a surprising moment happened in Pradeep’s life. Popular author Paulo Coelho shared picture of his autorickshaw named ‘Alchemist’- the name of the book written by Coelho. READ MORE

Brushing aside gender norms, two women from Peruva near Kaduthuruthy in Kottayam have been taken up painting works, a sector dominated by men. The duo, Radhu (33) and Sinimol (36), have no inhibition and fear in climbing the roof top or in standing on top of ladder to paint houses or buildings. READ MORE

When you enter the Varavoor government lower primary school, Thrissur, you will hear the mooing of cows and bleating of goats amidst the chatter of the kids. The school has got a pond, birds, a biodiversity park and much more. The students are active participants in the farming activities organised by the school. READ MORE