Kavitha: a phoenix-like rise from the ashes of the past

A horrifying domestic fire accident left Kavitha with 85 per cent burns, and saw her husband abandoning her; but life made a comeback through caring doctors and an Anganwadi job, and now she in turn ministers to those similarly afflicted 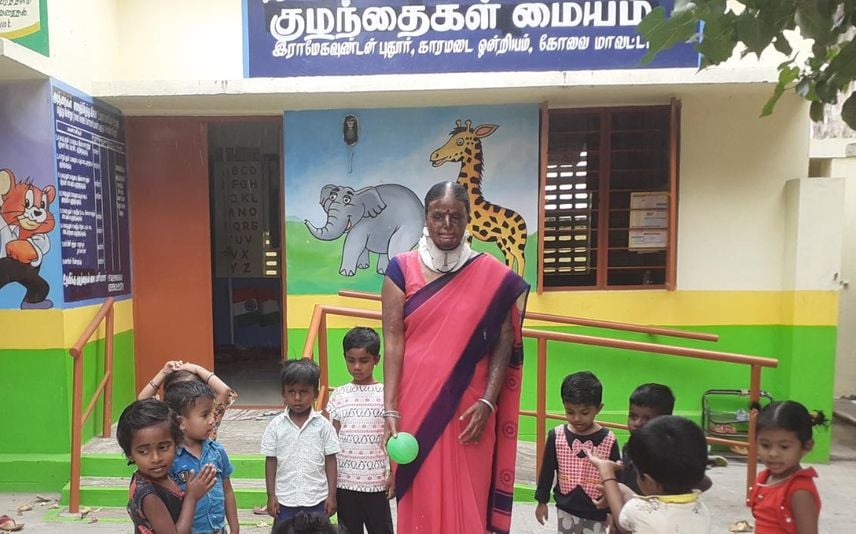 Kavitha and children belonging to the anganwadi. Photo: G Vijayabhaskar

Mettupalayam: Kavitha is scripting a new history on the blackened chapters of her life. A decade back, fire from a gas stove left her with 85 per cent burns, from which none expected her to recover. Now, the 40-year-old homemaker from Tiruchirappalli brings solace to children and disabled people.

That fateful day in 2012 changed her into a shrivelled cinder of a human being confined to the interior of her house. Then a year later, she approached a hospital in Coimbatore to undergo corrective plastic surgery. By that time her husband had abandoned her.

Since she needed constant medical attention for treatment, Kavitha and her mother, Rajeshwari, relocated to Mettupalayam. Gradually, the sympathetic ministrations of doctors and their support fortified her confidence. The burns were reduced by 40 per cent, though the left ear shrank and fused with the body.

In 2018, with state government aid she became a teacher in Thekkampatti Rama Gounder Puthur. The children who initially shrank out of horror from her were by degrees moved by her maternal warmth.

In 2020, during the census enumeration exercise, she encountered similar lives confined behind closed doors in cold neglect. Then, it dawned on her that this invisible population was double the number that could be seen in the outside world.

The lives of those destined to a bedridden existence, those with congenital conditions and with similar afflictions wrought a change in Kavitha. She also felt a sense of self-gratification when was able to help them during the Covid-19 pandemic. So, she felt emboldened to reach out to various voluntary organisations and sourced wheelchairs, tailoring machines, mattresses, and food items from them.

Adjacent to her tailoring shop, Kavitha runs a small shop too in Maninagar Kattoor. After finishing her day job from 8.30 a.m. to four in the evening in the Anganwadi, she stitches clothes for those similarly incapacitated. A portion of her salary and her tailoring earnings go to the physically challenged.

On the occasion of International Women’s Day this year, the Indra Ratna Trust, Thiruvalluvar, honoured her with the award for those women who usher in social change. It consists of a silver trophy, a cash award of Rs 50,000 and a citation.