A six-year-old girl from Kannur was transfixed when she first witnessed the mesmerizing sights of Ronaldinho's dancing feet and Beckham's iconic penalty against Argentina in the 2002 FIFA World Cup. Back then, Jushna Shahin, the girl brought up in a football-loving family, never would have thought about how the game of football will change her life forever. She went on to cover European football and had the opportunity to witness some of the best moment in world football through the eyes of a journalist. A six-year-old girl from Kannur was transfixed when she first witnessed the mesmerizing sight of Ronaldinho's dancing feet and Beckham's iconic penalty against Argentina in the 2002 FIFA World Cup. Back then, Jushna Shahin, the girl brought up in a football-loving family, never would have thought about how the game of football will change her life forever.

From that day onwards, the sport became an integral part of her life, and by the time of the next world cup in 2006, she had become a die-hard fan of Lionel Messi and Argentina. Her dream of meeting and interviewing him motivated her to study Spanish and move to Spain as a teaching assistant and football correspondent.

In a brief interview with mathrubhumi.com, Jushna shares her unusual story of passion, dream and love for football.

How did you fall in love with football?

Though my first memory of the World Cup was in 2002, it was only during the 2006 WC that I became a die-hard fan of Lionel Messi and Argentina. I was brought up in a joint family of football lovers. My father adored the game and even won the Mushtaq sports journalism award for reporting in 2005. One of my uncles, aged 40, plays football almost every day before heading to work. He still has this aura and energy of a youth. Recently, he even scored a goal with a bicycle kick. I was brought up amidst this football frenzy.

My brothers are football players and are actively involved in the sport since their childhood. Even I am married to a person who adores the game. The support from the family was always there for me. Though I was not taken seriously during my early childhood for being neck-deep in the game, nobody chose to discourage me. Certain limitations in life drove me to channel my love for the game to sports writing. After I got married in 2019, nobody had any problem with me pursuing a career based in football.

From Kannur to JNU. Can you share that journey?

I was down in tears after Argentina was knocked out by Germany in the Quarterfinals of the 2010 WC. Then I started watching interviews, only later to get caught between the Spanish the footballers spoke. Strenuous efforts to learn Spanish through Yutube went astray. And it was then that I found this BA-MA integrated course in Spanish Language Literature and Cultural Studies offered by JNU.

It took a lot of effort to convince my parents to let me go to Delhi. This was a huge step for me, and I was one of the two or three under-grad students from Kerala. So it was the need of the hour to break the cultural barriers and blend into a JNU culture, where I found a new perspective on life.

The dream of meeting Lionel Messi and the ultimate journey to Spain?

Since becoming a Barcelona fan, I dream of travelling to Spain and seeing Messi play. I arrived in Spain in 2019 as a Language and Cultural Assistant. I had travelled all alone from Delhi to Jerez de la Frontera (a town in southern Spain) with no contacts or friends here. I had to do everything from scratch. I had even got my new bicycle robbed the first week here. But eventually, I managed and learned new things. I watched the UEFA champions league round-16 match between Barcelona and Borussia Dortmund. Messi scored one and assisted for two goals in the game. I even gave a hand-written letter to Messi through their club office. Later in August 2020, when Messi wanted to leave the club, the Catalan fans arose in protest, and I travelled from Jerez to Barcelona to cover whatever was happening there. That was the most impulsive decision I took as a football journalist.

In 2018, I started writing in this field and thought about becoming a journalist when FIFA World Cup 2018 was around the corner. By the time I had met Bhasi Malapparamba, who inspired me to pursue the sport and start covering football matches. He gifted me all the books that he had authored about football. He filled me with hope and determination that media accreditation is just hard work away and is not impossible.

In 2020, I moved to Sevilla from Jerez with hopes to cover matches in UEFA and La Liga. Also, I was pregnant during that time. Due to the pandemic, all the stadiums were closed down, and all matches were called-off. 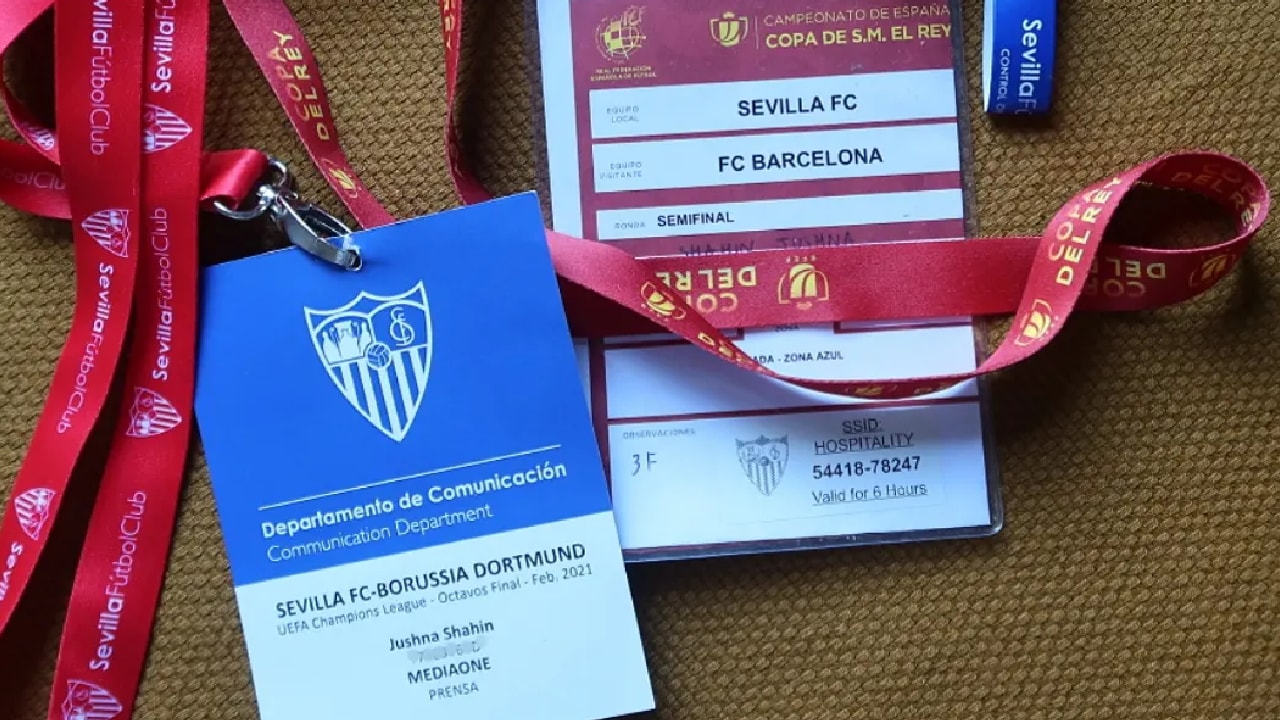 When the Spanish Supercup final was played in Seville between FC Barcelona and Athletic Bilbao, I was there with a swollen foot due to pregnancy amongst a dozen fans who waited two hours outside the stadium to see the team bus. I was going through some tough times, especially with pregnancy, and my request for accreditation was declined. From then on, I started making calls to my friends in Spanish media for advice and opinions about the process.

The next opportunity came when PSG allowed me to cover the UCL round-16 between PSG and Real Madrid. I also had access to the pre-match training and press conferences. At PSG, I saw Messi yet again, though in a different team. I was able to see Messi, quite close to me, amongst Neymar, Mbappe, Ramos and all the others training ahead of the match. I was also able to raise a question to Benzema during the press conference.

I also covered the El Clasico between Real Madrid and FC Barcelona at Santiago Bernabeu. Earlier during my PG, my dissertation was on 'Nation-states politics on the perspective of EL +clasico', where I had done a little bit of research on El Clasico.

And to have watched it from the grandstand press box of Santiago Bernabeu with a press card made my experience unforgettable.

The writing experience and the expectations for the FIFA WC 2022?

I started writing about the 2018 World Cup with an online portal- 'Footy Times'. Before that, I had also written articles for The Companion. But in 2018, I wanted to hone my football writing skills and improve my reporting quality. I also briefly covered the games for a TV channel in Kerala. I am hoping to attend the 2022 FIFA WC with media accreditation. Let's hope everything goes well.

Revolutionary commitments or struggle against ...