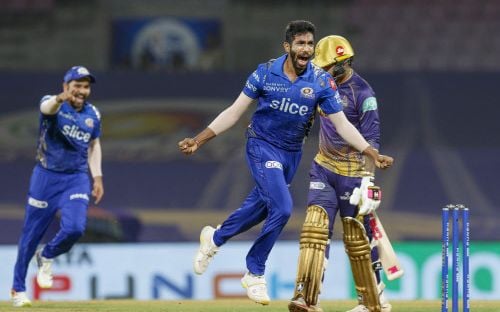 Better late than never, Jasprit Bumrah was in his element, taking wickets in a clutch against the Kolkata Knight Riders in the Tata IPL-15 at the DY Patil Stadium. For seven weeks, he had appeared to be an honest toiler in eleven matches, not able to penetrate the defences of batters. His fellow Indian and overseas fast bowlers also were in a plight, unable to get the better of the rivals in pitch conditions that offered assistance. Luck eluded the Mumbai Indians' pace pack.

But the bad luck phase had to end, and it ended with the country's premier fast bowler causing the downfall of five Knight Riders batters - two in the 15th over and three in the 18th over, his second and third overs. The speedster with a natural, but unique run-up and action, dismissed Andre Russell, Nitish Rana, Sheldon Jackson, Pat Cummins and Sunil Narine for figures of 5/10 in four overs. It was his first five-wicket haul in the league and the league's fifth-best. He was a class act.

Bumrah’s best effort in the league (in its 15th season) helped Mumbai Indians to check the supply of runs and keep the Knight Riders' total to 165 but did not help his team prevail over the Kolkata side that won by 52 runs. His fifer though was the high point of the match in which the jury had no option but to name him as the man of the match.

Discovered by former New Zealand captain and talent scout John Wright, Bumrah has had a flourishing career for most of the ten years he has turned out for the Mumbai Indians. Though introduced to the IPL in 2013 and when he took three wickets in two matches, Bumrah became a force only from his fourth season in 2016 when he took 15 wickets. He has always been the linchpin for Mumbai taking wickets at a low economy rate that has been under seven for three seasons and under eight for five seasons.

His best before the 5 for 10 against the Knight Riders was the three for 17 against the Rajasthan Royals at the D Y Patil Stadium. It's after this match he hit a rut, bowling well within himself and not getting wickets.

Bumrah dispelled all doubts about his dismal bowling saying: "If you understand the game, you have to observe what’s going on, what the game is like, what situation you are bowling in, and for me personally, I’m very happy with my rhythm throughout the tournament. I know there is a lot of noise outside that goes on, but it doesn’t really affect me. Because I’m not a person who judges my performance on what others think or what the experts are saying or whatever people want to say.”

Bumrah is right in the sense that only twice in eleven matches he was hit for over 40 runs. He has sent down 46.2 overs, half of it in the back-5 when batters heave at everything.

Bumrah had good support in the past years, in particular with New Zealand left armer Trent Boult in the last season. It has been quite a contrast this season with no support from the likes of Australians Daniel Sams, Riley Meredith, Englishman Tymal Mills and the Indians in Basil Thampi and Jaydev Unadkat.

The good part of his bowling has been that skipper Rohit Sharma has used him fully in almost all matches. Bumrah has also struck a couple of weeks before the start of the India - South Africa Twenty20 internationals. The selectors may not field him in all five matches though.

The MI v KKR match was dominated by fast bowlers; Andre Russell and Australian Pat Cummins. The Australian Test captain Cummins lavished praise on Bumrah’s bowling saying that he bowled back of a length and hit the top of the stumps. All said and done Bumrah’s five-wicket haul, conceding a mere 10 runs, was truly a champion stuff.

Bumrah's India bowling partner, Mohammed Shami is having a better season. Others who have done well are Umesh Yadav, Khaleel Ahmed, Umran Malik, Aavesh Khan, Mohsin Khan, T. Natarajan, Harshal Patel and Prasidh Krishna. But the most pleasant news of the league has been Bumrah getting a heavy load of wickets.