All facets of life are undergoing timely restructuring; we are witnessing a social transformation to the new-normal. But our judicial system remains outdated, our courtrooms archaic. Do we want this to continue? Isn’t it high time we made courtrooms survivor-friendly? 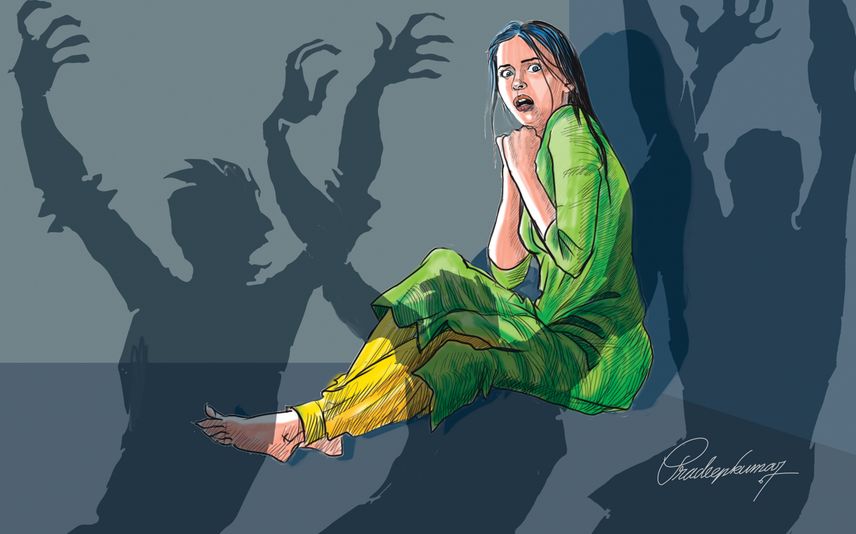 “15 days. I had to stay in the courtroom from morning till evening, for 15 days, facing seven lawyers. Their questions, cross examination, physical assessment…I felt so alone. Totally alone. I was forced to go through that traumatic incident again and again. There, every second, I had to prove that I am innocent, that I had not done anything wrong, repeatedly. And, in those days, I realised that this was my battle, I alone had to fight it in that court for myself…sometimes it felt like I was waging a war against the world.”- Malayalam film actor and survivor of a 2017 sexual assault case

“I was called for the trial years after the case was charged. My mind was whirling. I felt brave, I felt strong, and I was hopeful of getting justice for everything that happened to me. I was shaking as I entered the courtroom. Police, court…. everything was new to me. Still, I went to trial, determined to face those people who mercilessly hurt me physically and mentally. I was prepared to reveal everything, tell everyone what really happened. When I tell the truth to his face, he will finally understand the depth of his cruelty and my words will really pierce his mind- that was what I thought. But what really happened was this – I felt like running away. All those questions from the defending lawyers do that to you; you will just want to flee from that courtroom and never come back. Initially I answered their questioning boldly. Then their attempt was to weaken me mentally, to force to me to keep silent. They even asked me the colour of the discharge after intercourse. My whole body still trembles thinking of that harrowing time. It made me hate courtrooms.”- A survivor who is now identified through the name of her native place. These words still haunt Kerala..

How they travail in pain! From a complaint to a long-drawn-out trial, and finally to the verdict of justice… from a hapless victim to a gritty survivor…it is a crawl from one point to the other, the distance is endless, the journey hard. So proves their experience during different timelines. In a way a survivor of rape is assaulted again inside the courtroom. She is subjected to a verbal rape! All through her life, she has to keep proving, “I did not do any crime, this was done to me without my consent.” Victim shaming accompanies her, so does mental trauma.

She loses her face, her identity, and shrinks to the label of her gender, prefixed by a place’s name.

Each step forward is a difficult task. All those girls and women who walked along this path, and those who are now following them, tell us the same thing- this journey is not easy. And the big question arises. What should be corrected?

“We really should salute these survivors. When a woman decides to file a complaint, she has to go through hell before it reaches the trial stage. If she manages to be there, it is only because of her willpower and determination. It must have hurt her so deeply that she took that bold decision. And, women like her stand strong on that single decision never to back away, and they wage a war,” says Adv Sapna Parameswarath, prosecutor and founder member of Punarjani Lady Lawyers Initiative.

For survivors, the period from the day the complaint is filed to the trial in court is one filled to the brim with challenges. Pressure mounts from the society as well as from the accused. Severe victim shaming follows. Very often, by the time the trial starts, the woman would have somehow managed to survive that phase and returned to a seemingly-normal life.

Unlike POCSO cases, rape cases involving adults as survivors are not fast-tracked and completed at high-speed. The court procedures force the survivor to relive those incidents which happened three or four years ago. That is the most traumatic phase each and every survivor faces.

So, the first thing we could do for them is to speed up the process so that the trial starts without further delay once the FIR is registered.

As POCSO cases have been shifted to Fast-track courts, cases related to child survivors are now getting the verdict delivered quite fast. In fact, such courts were set up to ensure a speedier sentence and justice for crimes against women and children, but an expeditious trial still remains beyond the reach of women survivors.

In a rape or sexual assault case, the key evidence is circumstantial. The report of medical examination is another crucial evidence. A rape accused can be convicted solely on the basis of the survivor’s testimony. But the court has to find her credible and trustworthy. And, that is where the survivor’s consent becomes important; she has to establish that the sexual activity was not consensual while the defence lawyers try everything to refute it. So, the survivor has to face questions probing to prove her wrong. She will be asked to reveal if she resisted the assault, if yes how, whether she was injured doing so….

And each survivor responds to such loaded questions differently. Some of them breaks down in court, some would be really shattered, a few reacts violently. What the defence targets is to make the questioning so traumatic that the only thing the survivor wants is to quickly do some answering and flee from there.

The judge can forbid any questions or inquiries when they cross the limit of decency, but the defending lawyers would interpret this interference as an encroachment into their cross-examination. Prosecutor can also object to scandalous quizzing by the defence team; even if this attempt might not succeed in withdrawing a question, such a timely response helps restore the survivor’s courage. And that is exactly what it is meant to do.

On the other hand, there are many courts that just refuse to interfere in such situations. But can anyone ever hold the court guilty of allowing a question? As per Sections 151 and 152 of Evidence Act, the court has the authority to control damaging questioning, but fixing the limit of decency is a task that courts find rather difficult.

In fact, Supreme Court has issued a set of guidelines related to this in the Nipun Saxena vs Union of India (2018) case. While delivering the verdict, the Supreme Court opined that “In courts, the victim is subjected to a harsh cross-examination wherein a lot of questions are raised about the victim’s morals and character. The presiding judges sometimes sit like mute spectators and normally do not prevent the defence from asking such defamatory and unnecessary questions. We want to make it clear that we do not, in any manner, want to curtail the right of the defence to cross-examine the prosecutrix, but the same should be done with a certain level of decency and respect to women at large.”

That winding road… from complaint to trial (Box)

When a sexually-assaulted woman goes to police, she first needs to lodge a complaint, detailing everything that happened to her. She has to sign this first statement after it is read to her. Police then register the FIR. The survivor gives her first statement while still in the shock of that traumatic incident. Her mental state at that time is likely to affect the statement too as she might miss out many facts. This could be rectified by giving a second statement (161).

The place where she was raped, the clothes she was wearing, whether her nude pictures were shot on mobile camera… all such details are recorded in 161. This does not need the survivor’s signature. Within 24 hours she has to go for a medical examination, and she should reveal to the doctor everything that happened. This medical report is crucial as evidence. Then, the statement is recorded by a magistrate (164).

In many cases when the complaint is filed months or even years after the incident of rape, there could be mistakes in the dates or years mentioned by the survivor. In such situations too, an additional statement is recorded.

It is after all these processes that the case finally reaches the court for hearing. Here, the first step is Examination-in-Chief where she has to repeat everything that she told the police. Then comes the cross-examination.

If the case has more than one accused, all their lawyers will quiz her. And the survivor has to face this volley of questions during their cross-examination.

Survivor Friendly Court Rooms, Chapter 5: I, the survivor, testify before the court that ...

Survivor Friendly Court Rooms, Chapter 4: She, the one wounded by touch