What is India for China? 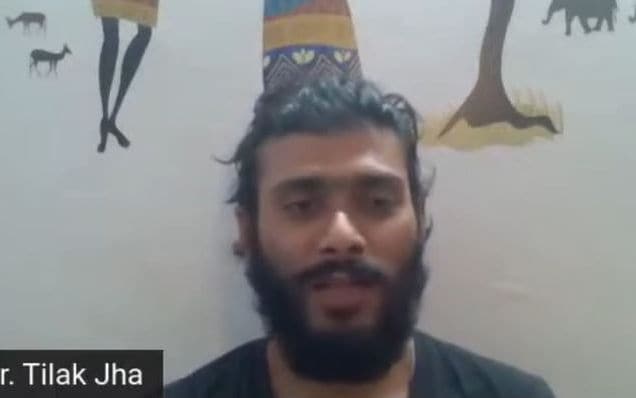 Screen grab of the interview with Dr. Tilak Jha

Dr. Tilak Jha is an expert in China with an Indian perspective. He was at BBC where he covered China’s annual parliament session and the Sino-US trade war. Tilak has also worked with the Shanghai daily. Here is an exclusive interview with Dr. Tilak Jha.

What is India for China?

India’s status according to Chinese perception can be divided into two. One is the official perception and the other is public perception. The Chinese government treats India as a South Asian power not as a world power. That is deliberate. They do realise that India is a major country and in the coming years it will become far more powerful. There is a deliberate stance for that matter, to cut India’ size as a regional power and keep it limited to South Asian theatre.

The public perception is a mixed thing. The younger generation admires Bangalore and Hyderabad. Many Chinese find India to be sort of a country where there is poverty and all sorts of domestic issues. Whereas the older Chinese generation has a positive perception of India. That is guided by India’s legacy of Buddhism. They are very fond of India. They consider India as a major country which showed a path to the Chinese nation.

While reporting for the BBC as a China Specialist, what was your experience?

BBC has a great reputation in China. But the government keeps a close watch on them. The BBC Beijing Bureau is very tightly controlled. They keep a tab on everyone who comes in or goes out.

There is a lot of de facto surveillance. Technically they will not admit that they are watching you, but they are consistently surveilling journalists. I think the issue has increased over the past decade, especially since Xi Jinping came to power. There is a rising tendency of curbs on foreign media, especially western media. Because they often post negative coverage of China, like stories in Xinjiang. So reporting in China is always a challenge. At the same time, it’s a huge opportunity to be able to work as a journalist there.

You had the experience of reporting on China's annual parliament session and Sino-US trade war. Can you explain how it was?

It was a very different experience. Primarily it is not a representative body. In a democracy these are very dynamic institutions which have real power. In the case of China, the parliament can be called a rubber stamp. Most of the decisions are taken by the top leadership of the CPC. So essentially, it’s a top down model. In the parliament session, the so-called representatives are often appointed or nominated by the party. They often come dressed in their local colours, especially the representatives from Xinjiang and Tibet. Actually it is a showcase thing. The coverage is very restricted, especially conversation with the representatives who come from these regions. Also, they will not say much to you. They are used to self-censoring, and this is also true for common people in China. The parliament session looks very organized; five-star kinds of facilities and everything is in order. But from a journalistic point of view, there is hardly anything in order.

The Sino-US trade war is a power game. It was never about technology or trade. America has been buying more from China and exporting less to China. It may be because they happen to be the biggest consumer in the world. The US didn’t really care about the Chinese exports until they exported cheap goods. But now the Americans have realized that China has started ramping up their 5G exports and other hi-tech exports. That's where the global supremacy of the western nations comes into question. They realize that if they just keep giving the Chinese a leeway, they will be turned upside down. That’s why it is a power game. Covering that was a memorable experience.

The Chinese are very tough negotiators. They have tried all the tricks. But the Americans have realized that it's about getting on the neck of their global status This is the reason why the rapprochement is not happening. But in the long run, if you ask me where it is going, it is difficult to say that the Chinese economy is under pressure. We have seen, even during Covid times, the Chinese economy remains as one of the top and the fastest growing economies. So it’s a consistent trend which is strengthening and it has gained significant momentum. The Chinese economy is almost 13-14 trillion. They are catching up very fast. The kind of Chinese investment in artificial intelligence is making it a tough game. We just hope that India rises to the occasion. I think we have to play a very crucial role in balancing the realignment of the power equation .

How was your stay with the Shanghai daily? It might be totally different from what you have been doing in the BBC. How was it?

Shanghai daily is a major newspaper of Shanghai city. Shanghai daily has a Chinese version and an English version. People hardly read the English version in China because Chinese is the mainstream language. Shanghai has a history of supporting journalism which was relatively less stringent from Beijing. But in recent years alignments keep changing. Sometimes there is less restriction on Beijing media than Shanghai media. It’s a city specific thing as well. Any foreigner who works in the Shanghai daily including Indians usually have limited roles. Generally, their work is related to editing in the English version. Sometimes there are debates and discussions and they do allow foreigners some leeway in terms of proposing and doing stories. In terms of work environment, infrastructure, etc Shanghai daily has a fantastic office. But it doesn’t really satisfy you beyond a point of time and that is where you have to choose. To be honest it’s difficult to become a journalist.

What do you think about the current Afghan issues and how China is dealing with it?

The Chinese happen to be the current de facto winner in the current scenario. They have got the Americans out which they wanted for several years, they have Pakistan on their side and they know how to deal with Pakistan. But I think the Chinese are not going to have an easy task in negotiating with Afghanistan. Because it’s very difficult to deal with the Taliban. We have seen what they have promised a month ago and things have started changing, whether it is about women’s rights, or about freedom or about pardoning the opposition leaders and former military people. So all these contradictions are going to remain. The Chinese are also very conscious about their global image. Therefore, they do realize that if they go all out to support Afghanistan and Taliban and if things go the other way around then they will be the only one to blame. They don't want the blame, but definitely want benefits. So, I think the Chinese will find it very difficult to negotiate with the Taliban. At the same time, they also have problems with Xinjiang, which is a North-Western province, and they have their own ethnic minority related problems. They have unrest there, suppressing people and this has been reported globally. We can't even imagine the kind of surveillance that they have put in Xinjiang. Xinjiang is the only region in China bordering Afghanistan. So the interaction is anyway by all counts going to remain very restrained. We will have to wait for a couple of years.

The Chinese have made risky investments in countries run by dictators, and countries which are not democratic. Still, they do it very carefully. They make sure that they don't make a loss on their investments. They are waiting, they will buy time. Once the sun rises and the grass turns greener, they will be on the brighter side.

How will this scenario affect the already strained Sino-Indian relations?

It is complicated. We have several issues, and the issues seem to be unending. India and China will possibly continue to have friction in the coming years as well. The very definitive thinking among the Chinese is that India needs to be cut to size. They do not want India to rise. The major factor is that they do realize that thirty years from now, the one country which can rise against China, could be India. They do realize that it could happen someday. But they want to delay it as long as they can. They want to keep India busy with Pakistan, Nepal and all these issues. Border issues are paramount in Sino-Indian diplomatic spat. The settlement is not happening, because the Chinese are not exchanging maps. The Chinese are reluctant to take it forward. They want it absolutely on their own terms, which again could have happened possibly with some negotiations. But their stance on Kashmir, their relationship with Pakistan, the Galwan incident etc signal towards the fact that they want to keep the pot boiling. There are trade imbalances, India exports far lesser than what it imports from China. So we have trade issues, we have military issues, we have border issues and we have geopolitical conflicts. But we do agree on certain things such as agriculture, climate and when it comes to dealing with the western nations on certain issues. Even though the divergence appears to be far more prominent as of now.

The Chinese will not push India too far. While they do understand that they have to keep India under limits, they also do realize that if they push India too far then it is going to backfire. They do realize India is a prominent country and it won’t forget the issues. We haven't forgotten 1962. So, they aren't really inclined to push India too far but they are definitely not willing to give India a leeway to rise on the shaft. If we see their stance on the Nuclear Suppliers Group or their stance on India’s demand for a permanent seat in UNSC, China happens to be the lone dissenter. If the power disparity keeps on going, the Chinese will become more and more assertive. Until the 1990s they never opposed UNSC membership or other things, but over the years they changed their stance. Earlier they were ready to go with the rest of the world, but now they are willing to take risks. So we will have to be careful that the power disparity, especially the economic disparity between India and China remains limited. If it keeps on increasing, we will see a much more assertive China.

I think no number of nuclear weapons for that matter is going to be the deciding factor, because we are not going to have a nuclear war per se. The Indian and Chinese leadership would never go to the extent of using nuclear weapons against each other. But at the same time conventional battles, exchanges and fights that we are having on the border is enough to keep the pot warming and that is what the Chinese want. So we have to be careful of all these things and make sure that we put our own house in order. If we are able to keep doing that, we will be able to take care of the Chinese well.