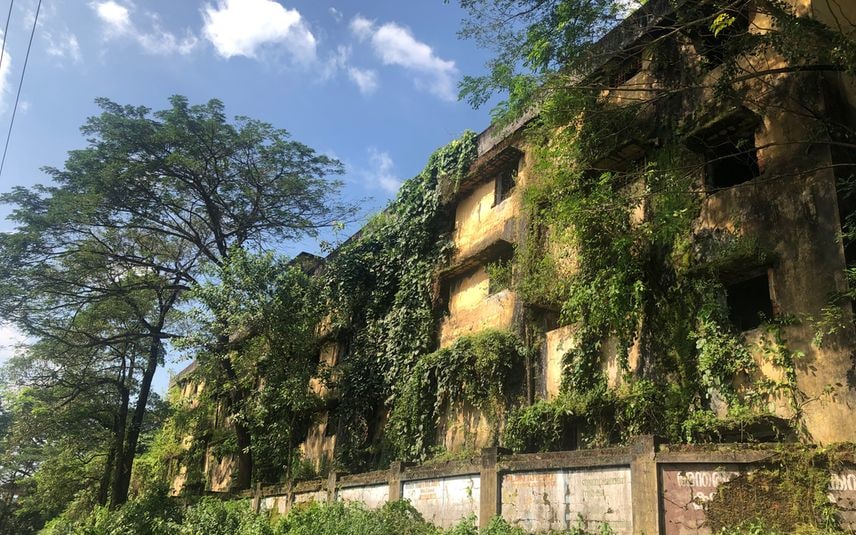 The dilapidated building of Gwalior Rayons Factory established around 1957-58

“See for yourself, this looks nothing less than Wayanad right now. This place used to be different, where you see these trees now, it was an industrial hub earlier. And now look at us”, exclaimed “Daddy”, as he is commonly known around in the area. He was pointing to the thicket of trees beyond.

Daddy aka K T Muhammad was talking about the renowned glory of the Gwalior Rayons factory in Mavoor owned by the Birla company. The factory has been shut for 20 years now. The mass acres of land, now home to creepers, reptiles and other creatures, is disturbing the life of the commoners. The once young workers of the factory, are now walking the fifties and sixties of their life. Standing at the Mavoor junction, one could see from afar the plight that Daddy was explaining. It was almost evening and everyone who passed around us joined the discussion on the Gwalior Rayons (otherwise known as Grasim Industries), for most of them happened to work at the company, once upon a time.

Grasim Industries, the Birla Group’s Gwalior Rayons Factory was established around 1957-58. The company brought development in Mavoor area. The group had many welfare initiatives for its employees, quarters, the Gwalior Rayons school, Janaseva Kalyan Trust Hospital and even a cultural centre. But 10-15 years into its inception, issues started to creep in one after another- environmental problems,labour strikes, raw material shortage etc. This led to the closure of the company in 2001. Today, acres of land remain barren unused by either the government or the company.

While speaking to a group of ex-employees about their old life at Rayons, a man called V Abdulla suddenly took out a small laminated card from his waist; it was his identity card from Grasim. Along with a young man’s photograph, written were the words, V Abdulla, Cleaner, Pulp division. It was something he always carried with him like a prized possession.

Daddy worked in the factory from 1981-2001. Working as a rigger and later upgraded as a Galasi worker in the mechanical section, K.T Muhammad had a lot to share. “When the factory was shut down, I didn’t know what to do. I sat idle for a while. 10 years passed like that. Today, I work in a jewellery shop at the junction.”

There were many temporary employees who were dependent on the company. The old workers at the Valiyangadi (Big Bazaar) were a prominent example. “My vaapa (father) used to be a lorry driver. He used to carry many loads to the Gwalior factory, I remember as a child. When the company shut down, not only did those rides get affected. The entire business of Kozhikode town drowned. We were gravely affected. It’s been years now. Vaapa is no more,” says Oomerkoya, owner of Bismi Traders, in Valiyangadi, Kozhikode.

Mavoor once used to be called a “High Wage Island” because of Gwalior Rayons. Many people quit their government jobs to join Rayons. The area has witnessed many changes from the inception of the company, developmentof roads and new buildings. I was the panchayat president for over 16 years here. I know Mavoor’s economy well; the development we see today is primarily due to the legacy Gwalior started, said CITU leader M Dharmajan.

“I still remember coming to this area for the first time from my hometown Aleppey, in 1972, in a Deviprasad bus (one of the only two buses available at the time), as a young girl admiring the beauty of the fields. The road used to be narrow then”, explained Arifa, teacher at Rayons school until 1989. She was later married to Kunjumuhammed, a worker in the hospital division at the factory.

She further said, “I am still in touch with my colleagues, who are my very close friends as well. Later, when I married Ikka, we shifted to the family quarters. It was a beautiful life, going to school, teaching the students, coming back to quarters, children playing together, having group studies with other kids, the sound of the factory sirens, etc.” The idea of Rayons school was such that, even the cleaners' kids could have access to free education at the school, but not any outsider, no matter who. The school provided high quality education; the performance of the children at the school also was very commendable. There are still alumni meets organised by the students of the school. The last one was in 2018 and then the pandemic happened. “I am still in touch with most of my students. We, teachers and students, are like a family, because we lived like one”, she smiled.

Today, there is an ongoing case between the management and the government regarding the ownership of this land. There exist mild structures of the factory amidst the thicket of trees, having survived the solitude of 20 years, the structures that reminisce the employees of the life they once lived.

The conversations gradually ended and the old men bid goodbye and walked away. While walking, Abdulla put his ID card back to his waist wallet, very carefully.

The remains of Gwalior Rayons are not in the blank echoes of those dilapidated buildings. Its in people like Daddy, Abdulla, Arifa, M Dharmajan and more. These buildings may be broken, but the factory, the quarters, the school, still stays intact, through people like them, reminding us the virtue of a community.