The chronicle of a flight out of a threatened city, beset by worries over parents fleeing a war zone, congested roads, crowded hotels, choked border crossings amid a pervasive air of uncertainty; and casting a pall over everything the latent threat of what invading armies bring in their wake 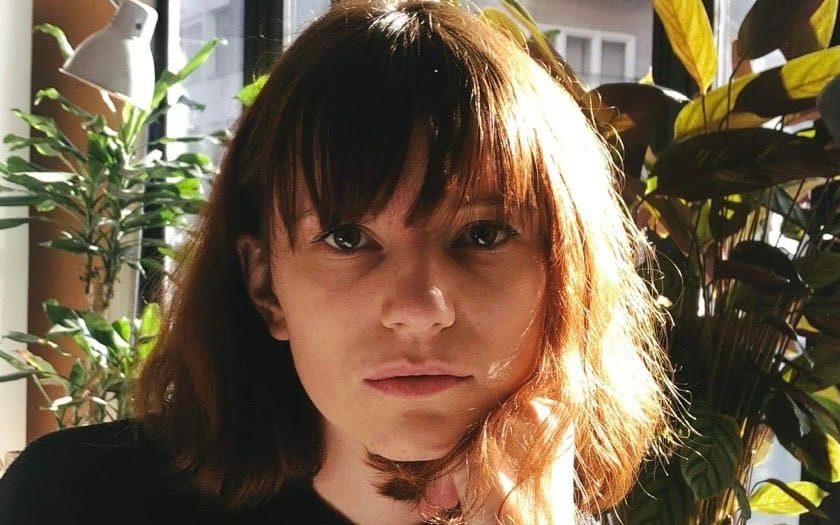 The writer at the Budapest Metropolitan University during her student days I Photo: by arrangement

I woke up and checked my phone, it was 5 a.m. There were three notifications: a missed call and a text from mum, and Breaking News from BBC with ‘Russia’ in the headline. I tapped my fiancé, Valik, awake. The night before, my brothers Anton and Theo, Anton’s girlfriend Maria, our friend Vadim and we had arrived in the ancient western Ukrainian town of Lviv. We had planned a relaxed weekend.

I got out of bed and went to wake up everyone. The first siren sounded just as everyone was assembled in the same room. Slightly disoriented, we turned on the TV. The screen screamed white words “Please evacuate and find your nearest shelter” on a blue background.

Unaware of the closest shelter or who to ask, we sat on the bed waiting for the siren to stop. Once it died down, I went to wash my hair and some of the boys went to look for the nearest shelter. Somewhere in between, I spoke to my mum who was calmer than usual. She said she and dad were okay and planning to stay the night at a friend’s place further down the hill from our Kyiv apartment. They might leave Kyiv the next day.

I got out of the shower and went to smoke on the balcony with Anton. As I stood with a towel wrapped around my head, Anton started singing the Ukrainian national anthem. The scene seemed like it was from a movie, with people singing on the way to their deaths. I asked Anton to stop. He complied. We heard another siren, but benumbed, we just stood there smoking. Was I afraid? Perhaps, but I was more incredulous, and I could not tear my eyes off the quiet beauty of the surrounding streets. Could anything terrible really happen here!

The rest of the day we sat glued to the TV, apart from the hour I spent with Vadim walking and having lunch in a cafe where life seemed normal. We discussed what our families were planning and how I could return to London. Going back via Kyiv, my childhood home, wasn’t an option. Who knows when I would see it again? I tried not to think.

I slept from 3 to 5 a.m. Waking up, I was fixated on the screen. Around 8 o’clock we made tea and pondered breakfast. But before I could finish my tea, came the banshee wail, again. We grabbed our backpacks, and rushed towards the basement, where the shelter was. I carried my tea. While standing in front of the door waiting for the neighbors to let us in, mum called.

She said they were leaving Kyiv and asked if we needed anything. Without thinking, I said: “No.” She asked if Theo wanted his laptop, I said: “No.” All I wanted was for them to leave immediately to safety. When the basement finally opened, I saw the enormous cobwebs around the entrance and decided to go back to the flat.

Valik, Vadim and I were classmates, and our teacher was in Lviv. So, we agreed to meet over coffee. Theo joined us. On the way, I started feeling guilty over his laptop. I promised him a new one. By now, I knew that my parents were enroute to Lviv. I avoided watching the news or looking at my phone, for fear of leaning of something happening along their route.

Back at the rental flat, Maria told us that her friend was on a train out of Kyiv. It would reach Lviv at midnight, but she had nowhere to stay. We decided to meet her at the station and bring her to our place. A curfew was in force from 8 p.m. to 8 a.m. Unsure of the situation, all six of us decided to go. Armed with documents we set out on the 30-minute walk. We were stopped by the police four times. On explaining that we were picking up an underaged girl from the station we were allowed to pass, with a warning to heed the curfew in future. By then mum had responded to Theo’s query, texting that they would probably arrive in the morning.

At 4 a.m. I spoke with mum, who said that they should arrive around 8 o’clock. Though quite close, it was the volume of traffic that was impeding them. A bit reassured over my parents, I fell asleep. On arrival, dad switched on his laptop and started writing emails and giving interviews. He had been driving for 22 hours and had only had two hours of sleep in the car.

After breakfast, we planned our next move. I had to get to London as soon as possible. The nearest border crossing was into Poland, but with a five-day queue there. Dad suggested we head towards the Slovakian and Hungarian borders, with shorter queues.

For the first time, I felt grateful for our family’s 7-seater, a lilac Mitsubishi Grandis. Maria got in a cab and headed 20 kilometers out of Lviv to meet her father who had also driven from Kyiv. My family, together with Valik and Vadim set off for Uzhgorod.

For an hour, we moved fast, but afterwards, the traffic grew. At one point, we spent more time idling than driving. We had left Lviv around noon. Usually, Uzhgorod is a four-hour drive, but by 10 p.m., we were still 40 kilometers away. We had to rest. All the hotels along the highway were full, but Dad found a children’s summer camp that opened their doors to us ‘refugees’ - we were that, now. It looked as if the owners had upped and left the place 30 years back, but it had a roof and running water, so we tried not to complain. My dad drank wine straight from the bottle and my mum ate spicy carrot salad with her fingers, as I laughed in panic!

We had been told we could sleep in, but dad woke us up at 6 o’clock. The roads were clear and five minutes later we were in the car. It took us another two hours to reach Uzhgorod - including a 15-minute stop for hot-dogs and coffee at a petrol station.

In Uzhgorod, we were met by my dad’s friend and at his home, his wife treated us to breakfast. I needed a power bank, and Valik needed a laptop. Dad’s friend took us to a shopping center. Dad joined us as he needed to stock petrol in case we had to do more driving.

The next priority was a train ticket to Hungary. All tickets were sold out. I was surprised how calm I felt. determined not to panic, I decided to take a shower. Emerging from the bathroom, dad said that his friend had wangled a seat on a bus, scheduled to leave within hours for the border.

Everyone came to the bus station. We took selfies and I was bundled into a bus full of mothers and children. I couldn’t allow myself to break down, seeing how strong and resilient everyone else was. I postponed it until I got on the bus. Unfortunately, sitting next to me was a wee girl who kept trying to share her snacks and wouldn’t stop smiling, making me simultaneously sad and happy. So, my breakdown never happened.

At the border we were told it would be a minimum of 10 hours before we crossed. I hadn’t packed food, presuming that the crossing would take only a couple of hours. Up the road were volunteers giving out food. On my way to them, I called a friend in Budapest who had said I could stay the night with her. She asked me where I was, and when I answered she said I was next to Slovakia, not Hungary!

I approached the ladies giving out sandwiches and requested for some without meat. Lacking those, they made cheese sandwiches. On learning that I was going to London, they asked if I was leaving for good. I replied that I would be back soon after winning the war. They smiled and wished me a safe journey.

I got back to the bus and called Valik, as I needed to figure out where to go after reaching Slovakia. He found me some flights from Kosice, but I decided to wait till morning before buying a ticket.

Leaving Uzhgorod around 5.20 p.m. we crossed into Slovakia at 8.30 a.m. the next day. Riding through the countryside, I told dad to buy me a ticket to London for 10 p.m. that night. Out of the windows I gazed at the fields and mountains. Turning, I spied chocolate on top of my backpack. I looked at the little girl and we smiled at each other.

I put the truffle chocolate, not my favorite, in the backpack. I’ll eat it when we win the war and I know that it will taste wonderful.

Incidentally, mum had grabbed Theo’s laptop, despite my naysaying. So that is one less thing left to who knows what fate befalls our beloved Kyiv!

The writer, a Recruitment Coordinator at Amazon, London, is the daughter of Elizabeth and the Ukranian writer Andrei Kurkov

{Original text of the Malayalam version published in the weekend edition of the Mathrubhumi of April 10, 2022}