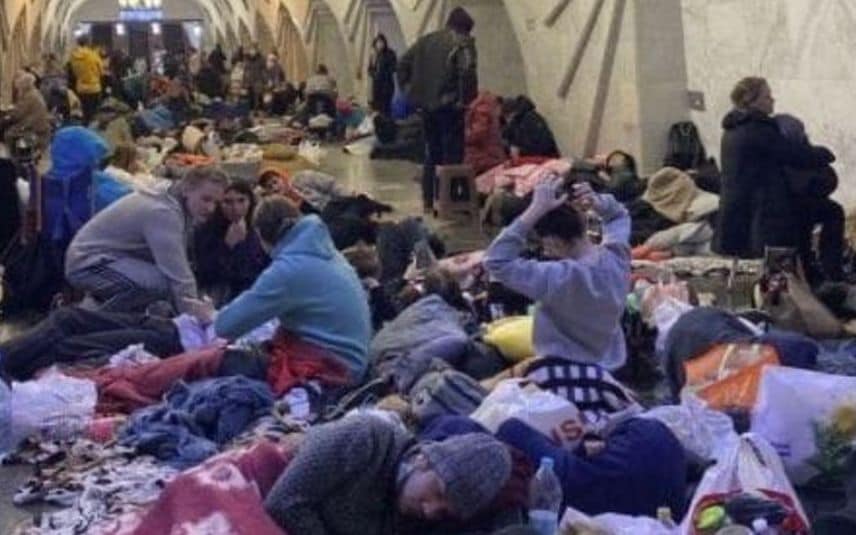 The Union Home Minister Amit Shah, in a recent interview, said that a 72 hours ceasefire was exercised in Ukraine on the intervention of Prime Minister Narendra Modi. This was to evacuate Indian students from the battlefield safely, he added. The statement was made during a News18 show on the backdrop of the Gujarat assembly elections. Earlier, BJP national President J P Nadda had also made a similar statement during an election rally in Himachal Pradesh.

What is the reality? Mathrubhumi investigates.

The first convoy of Indian students trapped in the war-struck city of Kharkiv in Ukraine was evacuated on March 2, 2022. Soon, several social media handles were flooded with the news reports of Modi's intervention in the evacuation process. According to these reports, Modi spoke with the leaders of Russia and Ukraine over the phone, leading to a ceasefire for 6 hours.

The very next day, the official spokesperson of the Ministry of External Affairs (MEA) denied such claims. "To extrapolate to say that somebody held off the bombing or that we are coordinating on that-this is absolutely inaccurate. To be facetious, does this mean we would also order a resumption of bombing?" the spokesperson Arindam Bagchi said on 3rd March 2022.

Upon investigation, it was found that Modi had called the Presidents of both countries. On 2nd March 2022, the day Indian students were evacuated from Kharkiv, the PM spoke to President Vladimir Putin of Russia. But it is an exaggeration that this phone call led to a ceasefire on the same day. In fact, there were bombardments in the city of Kharkiv and nearby areas on the 2nd and 3rd of March. So the claims that appeared on social media earlier turn out to be a mere extrapolation of the situation.

After that, we investigated whether any other calls made by Modi led to a ceasefire. It was found that the PM further contacted Putin on 7th March 2022. He had also called Ukrainian President Volodymyr Zelensky on the same day.

"During the call, Prime Minister Modi conveyed his deep concern for the safety and security of the Indian students remaining in Sumy. President Putin briefed the Prime Minister about the ongoing measures related to humanitarian corridors for facilitating the evacuation of civilians, including Indian students," the MEA press release reads. So, it is clear from the statement of Putin that Russia had already decided to open humanitarian corridors.

Once the humanitarian corridors are open, the parties involved in the war will exercise a ceasefire to evacuate civilians trapped in the battleground safely. It was through these corridors that Indian students were rescued. Besides India, many other nations had also contacted Russia and Ukraine for the same.

The discussion for ceasefires and the opening of humanitarian corridors dates back to February 2022. Several world nations, including Russia's ally China, pressured them to announce a ceasefire and open the corridors through various means. So we could understand that the decisions of temporary ceasefires to safely evacuate the civilians were taken as a result of all these events.

The link of a meeting between Russia and Ukraine in February:

Humanitarian corridors were opened for the first time on 7th March 2022. One between Mariupol and Zaporizhzhia was opened at the personal requests of French president Emmanuel Macron and German Chancellor Olaf Scholz. These details were made public by the Russian defence ministry. About 56 corridors were opened in Ukraine on different dates in March alone. But there is no evidence of Prime Minister Modi's intervention in opening any of these corridors.

Amit Shah's statement claiming that Prime Minister Narendra Modi intervened to stop the Ukraine war for 72 hours is misleading. No evidence could be identified to prove Prime Minister Modi's intervention in declaring temporary ceasefires in Ukraine. Besides India, leaders of other countries had also contacted Russia and Ukraine for the safe evacuation of their citizens. Moreover, Western countries and friendly nations like China also pressured Russia to announce a ceasefire and open humanitarian corridors.

Poland through the eyes of artist Tomasz Koclega and his 'Inner balance' ...