DU press release reveals only 2,365 students from the Kerala syllabus have joined the colleges. The total admissions come around 60,904. In some colleges some courses have a sizeable presence of Malayali students. 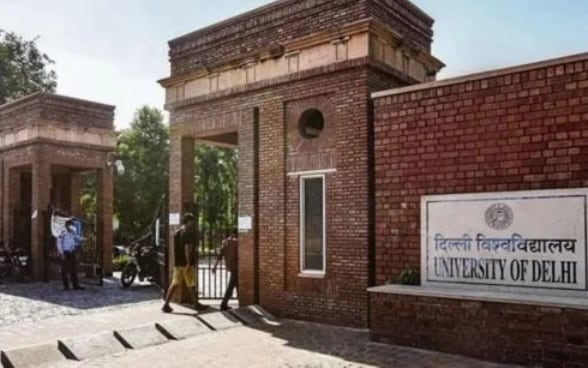 Kozhikode: The number of students from the Kerala state syllabus who took admission to the colleges of Delhi University in the first allotment is less than 4 percent of the total admissions, shows the data released by the DU. However, the concentration of the admissions in certain courses and colleges may have provoked the north Indian teachers and students organisations to cry foul.

As per a DU press release, only 2,365 students from the Kerala state syllabus joined the university till October 7. The total number of admissions stands at 60,904. The university has not released the breakdown of students from different states in different colleges. However, a quick look at the previous admissions provides an overall picture of what the controversy is all about.

The DU consisting of almost 70 colleges is divided into two campuses. Total strength in UG courses is around 70,000. Malayali students prefer the North Campus over South Campus due to various reasons. 'In South Campus, the majority of colleges teach in Hindi. Also, the area around North Campus is more habitable for us,' said Ashique Ali T, a former student of Ramjas College.

Ramjas College and Hindu College are two prominent colleges in which a sizeable number of Malayali students have been taking admissions. 'The political science course of Hindu College has gained some attraction lately,' says Akhil K M, Convenor, SFI DU. A student of Hindu College said the attraction is a pan-Indian phenomenon. 'If you look at the number of applications, it has risen exponentially. Not just from Kerala but other parts of the country as well,' he said.

Political Science, Physics, English literature and History attracts most of the candidates from Kerala. In the 2019-'22 batch, the Physics UG course in Hindu College has 39 Malayalis out of 141 students. In the 2020-'23 batch, 23 Malayalis got enrolled out of 102 students, says a student from the college. Dr Chandrachur Singh, a faculty of the Political Science department, in his opinion piece written in Hindustan Times said 105 students from Kerala with 100 per cent marks sought admission to the course this year. DU needs a better methodology for admissions to 'promote diversity,' he wrote.

In Ramjas College, around 25 students from Kerala are enrolled in a class of 190 students in the political science UG course. No other course in the college has more than 10 students from Kerala, a student told mathrubhumi.com. The colleges declare a cut-off percentage of their choice. If the applicant is above that line, he/she will get admission, no matter what the sanctioned strength is. This is the policy of DU admissions.

The percentage of a candidate is decided based on the marks of just 4 subjects in the Plus Two examinations. Kerala state syllabus students have been securing 100 percent in even languages since at least 2009. However, the 100 per cent cut off rate in DU colleges is not a new phenomenon. Many prominent colleges have been setting this high mark for quite a long time.

'Earlier, the OBC, SC, ST reserved seats would not be filled with such high cut-offs in the beginning. The colleges would gradually reduce it in the successive allotments. But now, many OBC students from Kerala have been securing seats in the first allotment itself. They are mostly from Malabar and a sizeable number of them are Muslims,' Ashique said. Living in New Delhi is a costly affair. OBC factor and financial stability help middle-class Muslims from Kerala to get into central universities. However, they also get admissions in the general category due to high academic records. Every panchayat in Malappuram may have at least five students studying in DU or graduated from it, says Ashique.

The 2019-22 batch of Political Science UG course of Hindu College has 33 students from Kerala out of 92. The 2020-23 batch has 38 Malayalis out of 95. English literature has 23 and 18 students from Kerala in its final-year and second-year batches. Both have a total strength of 58 students. Even if the overall number is comparatively less, '500 students are enough to cause trouble,' Rakesh Sharma Pandey, the Kirori Mal College Physics faculty who triggered the 'marks jihad' controversy said. 'All of them taking admissions to one particular course or college does not ensure diversity,' he added.

In 2012, only around 30-35 Malayalis were studying in DU, recalls Ashique. RSS and ABVP have been looking at the gradual growth of Malayali students for quite some time, he says. 'If you look at Ramjas, there may be 300 Malayalis in the college that has around 8000 students. But their presence is evident. Malayalis are active in politics. They are very social. If 100 boys wear dhoti in a North Indian college, no one can miss it,' he said. The fame of Delhi Colleges have was spread in Kerala by students themselves. It also got more media attention recently. Student organisations also 'recruit' teens from the state to DU. 'Even ABVP tried to get Malayali students. But they failed,' a former student remarked.