Can ordinary women who have occupied ‘public’ space ever be the same again?

This International Women's Day we should celebrate the emerging images from Shaheen Bagh to Jamia Milia of the Indian woman as peaceful, creative and determined agitator to ensure the rights of all to equality as citizens of a free nation, advocates the veteran journalist-activist. 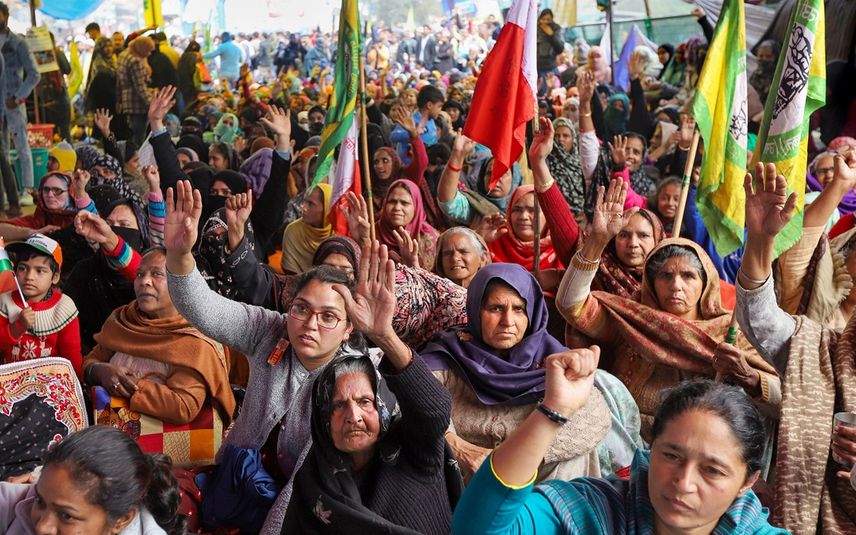 This International Women's Day we should celebrate the emerging images from Shaheen Bagh to Jamia Milia of the Indian woman as peaceful, creative and determined agitator to ensure the rights of all to equality as citizens of a free nation, advocates the veteran journalist-activist.

Rituals lose meaning when we follow them blindly. And so it is today, International Women's Day. Few will know when March 8 was designated thus, or even why.

Instead, each year we hear platitudes from politicians about "empowering" women, and respecting them. Even as they mouth these words, millions of women in this country continue to barely survive burdened as they are by poverty and by deprivation of basic services. They are treated as second class citizens and suffer unspeakable violence. One day of celebrations will make no difference to the grim realities of their daily lives.

Businesses and industry are not far behind in their fake concern for Indian women. For them, the woman is ultimately a consumer. So she must be offered special deals on this day. The more she spends, the more "empowered" she will be, they believe. Getting away from these fake sentiments, how should we mark this day, if indeed there is any need to do so?

I would suggest we celebrate the emerging image of the Indian woman-- as that of the protestor. If anything stands out in these last months, especially after December 15 and the unjustifiable and brutal attack by the Delhi police on the students of the Jamia Milia Islamia University, it is the leadership that women of all ages have provided. They are at the forefront of the protests against the Citizenship Amendment Act (CAA) and the National Register of Citizens (NRC). We have seen them on social media, on television screens, in photographs, fearlessly leading protests, shouting slogans, confronting the hostile police, lustily singing songs about freedom, about ending patriarchy and about citizenship. We have seen them at Shaheen Bagh in Delhi and at multiple other similar protests around the country. They have established a new norm for protest -- one that is peaceful, creative and determined.

Also, by occupying a public space, these women have asserted another right -- apart from their right to citizenship which anchors their protests. It is the right of women to occupy public space, something that is constantly denied to them. Most public spaces in India are dominated by men. They can hang about, gossip, drink tea, smoke cigarettes, relax, occupy benches, and straddle the pavement. You rarely, if ever, see Indian women doing this. They use public spaces for transit, not for pleasure. Now they are using the “public” space, so called because it should be accessible to everyone, to protest.

Another difference that should be noted is that the protests are not centered on their rights as women, but the rights of every person to equality as citizens of a free nation. These women have established that while insensitive and unequal laws and policies, such as the CAA, disproportionately impact women, they also affect anyone who is marginalised.

We don't know whether these protests will shift the policy of a government that appears tone deaf. But there is another aspect to consider. Have the women who are protesting, tutored as they are to accept a limited role in public life and in public spaces, changed? Can they ever revert to the way things were before they stepped out on the street? Once you have shed inhibition and come out to protest, can you go back to being the person you were? Or does something shift in you radically, change your perception of yourself, and also alter the way others see you?

The answers to these questions are not evident today. But it is possible that the anti-CAA protests have triggered another women's revolution, one that asserts their rights as equal citizens. That is surely something we can celebrate today.

The English original of the first article in the fortnightly column titled ‘Akakkannu’ {Inner Eye} was published in Mathrubhumi daily on March 8, 2020.

The writer is a Mumbai-based independent journalist and author, who has for over four decades specialised in developmental, environmental and gender issues. Her latest work is ‘The Silence and the Storm: Narratives of Violence Against Women in Media.’

On Women's Day know about India's first intimacy coordinator, her perspective on feminism and more