Bulldozer is not just a machine, it is the symbol of Hindutva: Brinda Karat 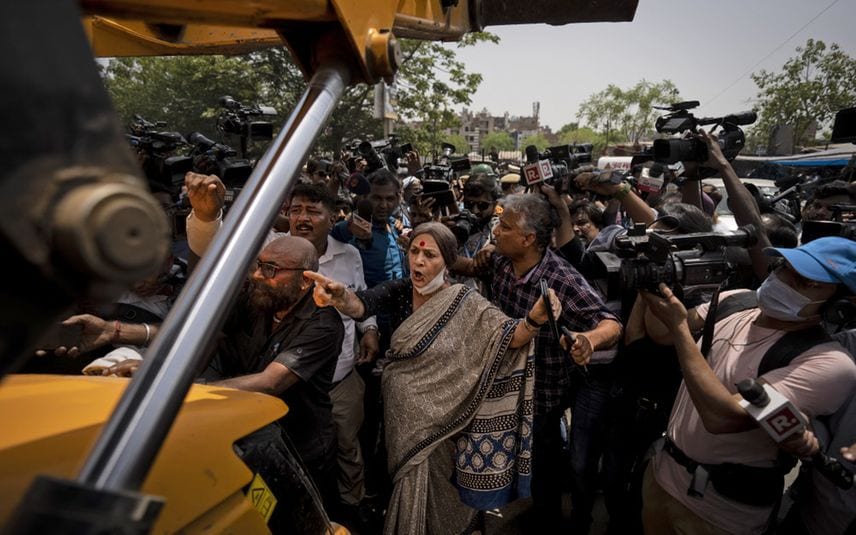 "The struggle at Jahangirpuri marks the Indian People's sentiments against the regime that is determined to implement the Hindutva agenda,'' says Brinda Karat, politburo member of CPM. Excerpts from the interview with Brinda, who was there at Jahangirpuri, to spearhead the agitation.

That was a timely intervention by you at Jahangirpuri on Wednesday. The visual of you, standing in front of the bulldozer, has become an iconic image across the nation. Could you tell us briefly your reflections on the incident?

I know Jahangirpuri quite well. The settlements in Jahangirpuri were established during 1975 - 76. The people , who got evacuated in Delhi during the emergency, were brought to Jahangirpuri. Since I was into trade union activities then I had gone to this area several times. In fact , it was at Jahangirpuri that I could organise a Mahila Conference for the first time. Most of the inhabitants are Muslims whose roots go back to Midnapur in Bengal. There are some Hindu families here. One of the most important facts to be highlighted is that there have been no communal frictions here for the last 4 decades. I wrote a letter to the city police commissioner highlighting the untoward incidents on April 16th .

It was an illegal rally by the hindutva brigade. Adeshkumar Gupta, the president of BJP, Delhi unit, had warned on April 19th about the arrival of bulldozers from MP . Gupta said that the Municipal Corporation Delhi ( MCD) authorities have been instructed to take on illegal encroachments . I contacted the voluntary lawyers union office bearers to know more about this. The SC stayed the demolition at Jahangirpuri on April 20th Wednesday. We reached the spot by around 10.45 am at Jahangirpuri. And what we saw was horrifying indeed! It was something surreal. The bulldozers were demolishing the houses and shops belonging to the poorest of the poor. The verdict of the apex court of the country was being blatantly violated at the national capital. it was very much obvious that the bulldozers were sent to the C block at Jahangirpuri with a specific agenda. There were two bulldozers at the spot where we reached. There were neither police officers nor officials from MCD to monitor the demolition process. So we had to argue with the drivers initially. Then one senior police officer appeared. He feigned ignorance about the SC verdict. Then we were able to talk to the MCD officials. It took some more time to convince them what was being done was contempt of court and completely illegal. There was nothing heroic about my intervention. I did what any ordinary communist worker is supposed to do in fighting against injustice at the ground level. It is our creed to fight injustice holding aloft the red flag.

There seems to be a pattern behind the communal conflicts across the nation. The critique is that these attacks are carried out with the silent consent of the state and that what is being witnessed is the fulfillment of the agenda of the majoritarian state. What is your response ?

The bulldozer is not just a machine. It is a symbol. It is the symbol of an ideology, a political strategy. It is a well organised political project. Continuation of the idea put forth by VD Savarkar in the 1920s. The fight at Jahangirpuri was part of the struggle against this ideology which divides human beings along religious, communal lines. They consider the minorities as second class citizens. It is totally anti democratic and unconstitutional .

Doesn't the fight against communalism demand greater alliances? So, is the left planning to have a new movement including the Congress and AAP?

Where are these parties? We didn't see any of them at Jahangirpuri , when the poorest of the poor were being uprooted. We are fighting from the midst of the suffering people. We would like to move along with people, who would do the same. As far as we are concerned our path is crystal clear. We fight against injustice and exploitation upholding the red flag. The kind of response that we are getting from all over the nation on the struggle at Jahangirpuri , is overwhelming! It is not just a reaction to stopping the bulldozer. The responses reflect the wrath of the Indian people against the injustice committed by the state. They do realise what is happening in the country. Contemporary politics demands that we must act effectively by absorbing the sentiments of the people. We are moving in this direction. It is up to other political parties which way they should choose.

PM is roaming without a mask: Brinda Karat