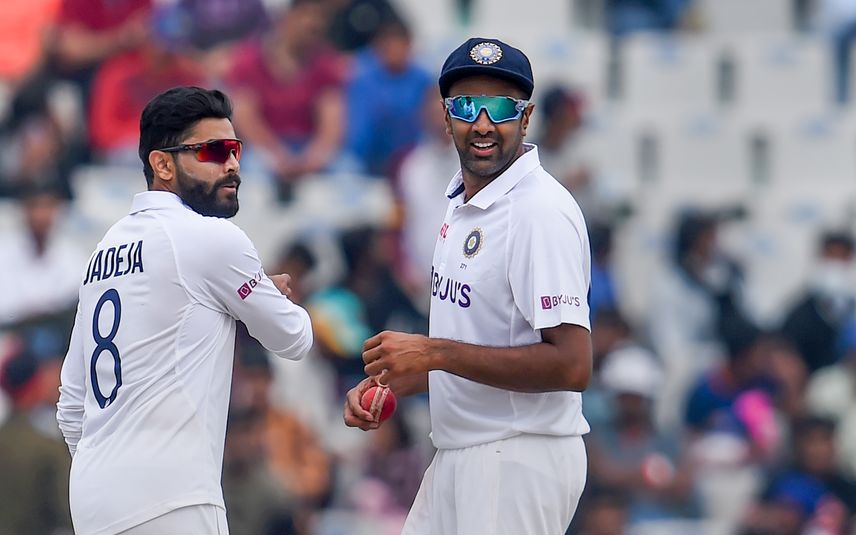 India’s spin twins from the winter of 2012, Ravichandran Ashwin and Ravindra Jadeja, are back in the thick of business, and that’s taking wickets in a pile and bringing down opponents for their team to score hands-down victories in home Test matches.

Ashwin, a peculiar off-spinner and Jadeja, a paradigmatic left-arm spinner, have just taken their demolition tally to 205 in 79 Test match innings at under 19 apiece, which is quite a remarkable feat (in the context of runs conceded), and the best by an Indian pair that has been in action in 75 innings or more.

The most effective pair in the last decade had a collection of 190 wickets before the start of the first Test against Sri Lanka in Mohali, and they took a whopping 15 wickets for India to crush its rival by an innings and 222 runs.

Ashwin made 61 and took 2 for 49 and 4 for 37 while Jadeja scored a brilliant unbeaten 175 and took 5 for 41 and 4 for 46 for India’s new Test match captain Rohit Sharma to believe that the Mohali performance was a near-flawless and perfect one, adding a rider though that he had been part of such clear-cut wins in the past.

The finger-spin practitioners are not far away from the record held by leg-spinner Anil Kumble and off-spinner Harbhajan Singh who together have caused the downfall of 218 batters in 99 innings at 25.57 apiece, and Bishen Singh Bedi and Bhagwat Chandrasekhar’s 213 scalps from 69 innings at 24.91 apiece.

Ashwin and Jadeja will get another opportunity to work on the Sri Lankan batters in the second and final Test at the Chinnaswamy Stadium, Bangalore from Saturday (March 12), but how many overs will the two get to bowl is a matter of conjecture because the second Test will be played with the pink ball and under lights.

Ashwin has taken 12 wickets in a day-night match, but Jadeja has sent down only two overs under the night sky. The third Test of this year will be played against England at Edgbaston to complete the previous year’s unfinished five-Test series in which Ashwin was benched right through. Ashwin is more likely to figure in the playing XI at Edgbaston, but it is unlikely that India’s best combination in the last decade would surpass Kumble and Harbhajan’s record.

In the course of the first Test at Mohali, Ashwin (436 wickets in 85 Tests) went past Kapil Dev’s tally of 434 wickets to be placed behind Kumble’s India record of 619 wickets in 132 Tests.

Praising Ashwin's performance, a former India off-break bowler, Shivlal Yadav (102 Test wickets from 1979 to 1987) said: “Ashwin has been tremendous for Indian cricket because he has taken a lot of wickets at home (306) and contributed well to victories and done reasonably well in overseas conditions (130 wickets), especially in Australia (39 wickets). A cricketer is tested in overseas conditions and Ashwin has adapted to all conditions quickly. That’s the biggest quality in him. He is also playing in all formats of the game. He has never let India down. A player’s real class comes in there, in foreign conditions. Anybody can do it in India and finish a Test match in three days. That’s not possible in foreign conditions.’’

Yadav, who has been a national selector and acting President of the BCCI following a Supreme Court order, described Ashwin’s style of bowling saying: ``He’s more like Venky (S. Venkatraghavan). He hits the deck, but it doesn’t mean that he doesn't flight the ball. He is tall and hence you don’t see the loop. You can see the loop if the spinner is short. Ashwin and Jadeja complement each other which goes to show that both have a lot of confidence in each other's abilities. Even while batting, they understand each other. Ashwin may not be a quick mover on the field, but his batting ability has come to the fore time and again. He has saved India quite a few times from embarrassing situations.’’

Former India stumper Kiran More, who has kept wicket to a dozen quality India spinners described the Ashwin-Jadeja pair as awesome. ``I don’t know why some people are criticising him, I'm very surprised. What he has done is fantastic; 436 wickets. We have two of the best spinners in the world. And both guys bat well. If I were the captain, I will have both of these guys in my playing XI. Ashwin has done well on turners and good pitches. He is also a good wicket bowler.’’

Furthermore, talking about Ashwin and Jadeja, More, who is the wicker-keeping coach for IPL team Mumbai Indians, said: ``When somebody takes 400-plus wickets, he has something in him. I rate Ashwin very high. Kumble and Harbhajan started the trend as a pair, and now it’s Ashwin and Jadeja. We have a world-class fast bowling attack and this pair, and that’s the reason India has the ability to take twenty wickets in a Test match. What Ashwin and Jadeja have done is unbelievable.

"There was a camp organised by the late Raj Singh Dungarpur in which Hanumant Singh and Vasoo Paranjape were there and even Bobby Simpson. Jadeja was under-14 or under-16 then and he was in that camp and I took him to play for my academy in the Elf tournament. Look how far he has gone now (as an all-rounder)."

Another former India left-arm spinner Venkatapathy Raju, who took 93 wickets in 28 Test matches between 1990 and 2001, felt that Jadeja came through while ball cricket and has excelled in Test match cricket. ``It’s the other way around. He started off with white-ball cricket. He was always talented and a super fielder. The point for me nowadays is that the batters are more positive and a lot more innovative in playing strokes. So it's not easy to go on, but I think Jadeja has an ideal pace and line and length, and he is patient. That’s why he is able to control the run rate. In present-day cricket, he is ideal. He is a highly-talented utility cricketer and a match-winner.”

Jadeja missed a number of matches owing to injury and did not play the four-Test home series against England last year and also the two-Test series against New Zealand, when Gujarat’s Axar Patel, also a left-arm spinner, teamed up with Ashwin and took 48 wickets (27 against England and 21 against New Zealand). A fit Jadeja in the last two years would have made him and Ashwin the top pair in India, but now, the two are closing in on the immediate record of Bedi and Chandrasekhar.

Let’ s take a leisurely stroll across the Instagram wall of Yaami, the photographer. What do we see? A certain newness topped with a sort of subtlety in ..

"See for yourself, this looks nothing less than Wayanad right now. This place used to be different, where you see these trees now, it was an industrial ..

The mesmerizing feel and softness of Chiffon sarees has enthralled millions of ladies across the world. In the amazing galaxy of sarees, Chiffon sarees ..