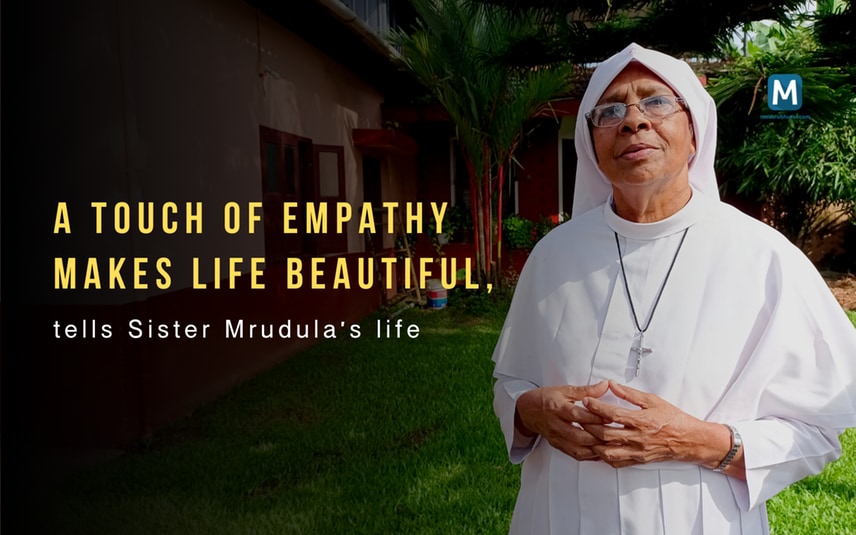 Sister Mrudula is a nun driven by incomparable compassion for the underprivileged and a steadfast desire to bring them up in society. A glance at her services while working for the 'Sisters of the destitute' will give one a clear picture of what she is striving to achieve in the modern world. Sister Mrudula, who recently completed 50 years of nunship, has travelled to many places, extending a helping hand and spreading love and joy among the people. Excerpts from the conversation with a true missionary and a humble woman .

I first started working for 'Karunalayam' in Thrikkakara which took in orphans and homeless people. Most of the time these inmates were brought in with serious illnesses. At first, I used to be scared when I had to witness deaths and tend to the ill. But eventually, I started finding joy in healing them. I joined Mercy Home in Chethipuzha in 1974, which was established to rehabilitate differently-abled children. In those days it was very difficult for families to raise children suffering from disabilities. We took care of these children in the best way possible without letting them feel excluded. But it is a fact that even today, differently abled people are not being provided with equal opportunities and this has to change. Today, I am a part of the Congregation of the Sisters of the Destitute, which reaches out to the poor and the downtrodden and provides everything in its capacity to aid them.

Sisters of the Destitute

The Congregation of the Sisters of the Destitute (SD) was founded by Venerable Fr. Varghese Payapilly in Aluva in 1927 with the motto 'the compassionate love of Christ urges us'. 1792 sisters are serving in 267 communities across several countries. The services provided are caring for the aged, destitute, and terminally ill patients, rehabilitation of physically and mentally challenged children and orphans, family welfare services in slums and villages, de-addiction and prison ministry, pastoral care services, dispensaries and clinics, formal and non-formal education, women empowerment programs and emergency relief work.

Something very remarkable happened during the year 1985. There were 103 thatched houses on either side of the highway near Aluva town. Many poor families, mostly migrants and those with nothing other than their names, were dwelling together there. We visited these houses, talked to the people there and thought of ways to help them come up in society. Years back, Cardinal Joseph Parekkattil had donated five acres of land near Chunangamvely to the government to build houses for the underprivileged. After reclaiming the site's ownership from the government, we decided to build homes for each family there.

Sisters of the Destitute and CST Fathers worked together for this during the span of the project. We talked to the people residing there, presented the matters before them and started the construction work. There were many issues along the way but we were able to tackle them and complete the work of 103 houses. Each family received nearly 3 cents of land. After that, the houses on the side of the canal were also conjoined with this project. A total of 153 houses were presented by the end of the development project. The then Minister for Revenue and Housing, PJ Joseph inaugurated the presentation ceremony. Eventually, we started conducting annual programs and celebrations among the residents and organised the youth to form associations. The students were given proper education and many of them are now abroad working at multinational companies, tasting success.

We conducted surveys in the houses in the locality and found that we had to ensure women empowerment in order to see considerable progress. We started many Mahila Samajams and Balavadis and organised programs under those. The block government has now taken over all these initiatives and is overseeing their functioning.

There have been many incidents when I used to serve in the Adivasi villages of Tamil Nadu. Untouchability and caste discrimination were quite common during that time. Malnourishment among women and children was also a matter of concern. We provided them with proper food, medicine and vitamin supplements. We started buying things from the Adivasi community and introduced them to the common public, thus making them feel included and accepted.

Another important undertaking was to start a day-care centre to look after the kids of women engaged in daily wage work during the daytime. The women from well-off families also joined in on this venture.

After that, I moved to a farmer's village in Meerut. I used to ride around on a cycle and interact with the people over there. We were able to start self-help groups and Mahila Samajams. We gave these women personality development classes and awareness classes about the female body. However, I had to leave Meerut soon after due to difficulty in coping with the climate there.

Back to the roots

I worked in administration for a while after returning to Kerala. Then I went to the Udaya colony and was able to serve the people there and start tuition classes for children in a full-fledged manner. This is where the contributions of
Commissioner P Vijayan IPS came into the picture. To improve the effectiveness of the tuition sessions, the police officer assisted in the appointment of qualified teachers.

Remarkably, the children enacted a play by Shakespeare on stage striking the awe of the audience, especially the parents. They were amused to see their children speaking in English. Children there are also given training in musical instruments. Cardinal Mar Varkey Vithayathil, Bishop Thomas Chakiath, Commissioner P Vijayan IPS and Former Mayor of Kochi Municipal Corporation KJ Sohan were present during the function. These students have scaled heights and often call me with gratitude in their voices. The houses in Udaya Colony are now being renovated by adding floors upstairs.

A vast majority of people residing in the Udaya colony were alcoholics and drug addicts when Sisters of the Destitute first visited the place. Three months after going there, we started meeting them individually, talking to them and making them aware of the repercussions of their choices. These people were rehabilitated at a place in Kanjirappally for weeks and went into remission. They have come a long way since then.

Currently, I'm staying at Kisan Colony in Thammanam which was renamed 'Shanthipuram colony' recently. The construction of houses in this enclave is progressing under the Life Mission project. We are hoping to see more and more of such positive changes around us. I have a humanitarian perspective when I reflect on my past, and I am absolutely grateful to God for allowing me to fulfil my legal responsibility to be a mother and friend to the destitute.

SISTERS OF THE DESTITUTE