In the land of coconuts, a son experiences for himself the hospitality offered his father, the fallout of an unexpected phone call eight autumns back 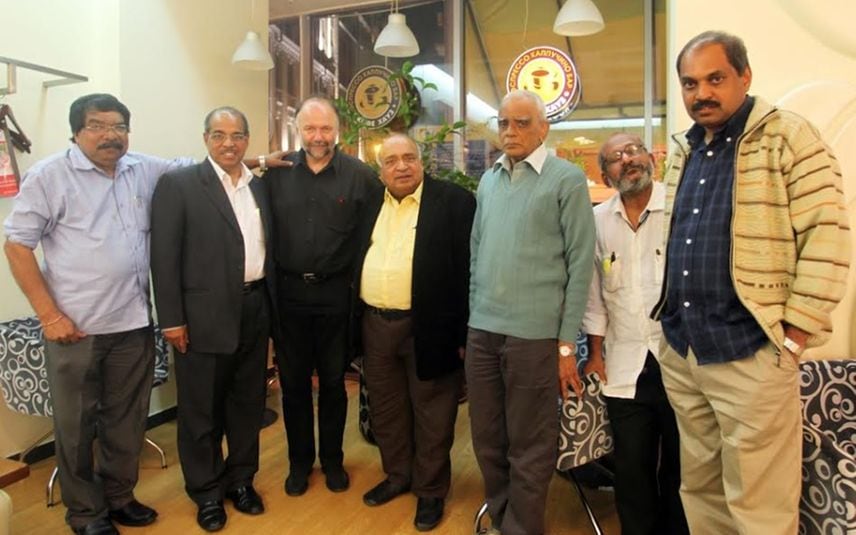 Budapest: From the moment my father, the writer Andrei Kurkov, said that he would be taking me to India; I was eagerly looking forward to it. To him, it meant the south-western state of Kerala, a wedge of land nestling between the Western Ghats and the Arabian Sea. From history I had learned early traders, including the thalassocratic Phonecians, Chinese, Romans, Jews, Arabs and other European colonial powers would catch the monsoon winds to the fabled Malabar Coast, lured by its wealth of spices.

The story of how my father came to visit Kerala has entered our family lore. On the non-descript forenoon of September 5, 2012, as he was walking across Sofia Square on the way to his studio, he receives a call from an unknown Sasha, which would lead to most unexpected of events, worthy of his own plots. She said that a delegation of Indian journalists and delegates, who were attending a publishers’ international conference in Kiev was interested in meeting him.

He agreed to meet them that evening in Cafe ‘Yaroslava,’ in the old quarter of the city. Within five minutes of his arrival, at the appointed hour, a 6-member team troops in carrying to his astonishment five of his titles in English. Thus was his introduction to the respected publishing house in Malayalam, Mathrubhumi. Its Chairman and Managing Director, M P Veerendra Kumar invited him over in the spring of 2013, since when began his travels to that enchanting land. Then, from 2018 on, he has been a regular invitee-speaker at the Mathrubhumi International Festival of Letters.

So, on January 30, 2020, I too became a part of this paternal peregrination to Thiruvananthapuram, the capital of Kerala, and the festival venue. The four days passed in a whirl attending the various sessions, listening to performances, striking up friendships and generally soaking in the culturally charged atmosphere in the resplendent surroundings of the Kanakakkunnu Palace. In between, we took time off to visit the legendary Padmanabhaswamy Temple, rising in 7-tiered splendor amid the bustle of crowded streets.

Last year, my father had brought back pleasant memories and some gifts including lovely, aromatic black pepper both from the Waynadan estate of M V Shreyams Kumar and from his other friend Prof. P Vijaya Kumar, whose flat he had stayed in Thiruvananthapuram. The professor had grown it in his pepper garden and processed it himself in his native village, Thonnakkal, an hour’s drive from the city. Driving along the national highway we talked about, among other things, the sights on either side. Some of the apartment complexes did remind us of buildings back in Ukraine, except that the ones back home are taller. In fact, the 9th floor flat that we were staying this year too offered a sweeping view of the city skyline, which I captured on camera.

At Thonnakkal we saw a small pepper garden and a small rubber estate. The peppers had been harvested but there were some drupes of green pepper still on the vines. Later on, at home in the city, the professor showed us the pepper being dried in the sun, spread on mats of reed, already black and fragrant with the aroma only fresh dried pepper can have. The intricacies of tapping rubber and collecting the latex were also explained to us. The land at Thonnakkal that he tends is inherited from his grandfather, the poet and social reformer, Kumaran Asan, whose statue we had seen outside the Kerala University.

We also drove to a scenic spot not far from Thonnakkal called Paramukal; a bare, rocky hill top with a panoramic view. To the west, one could glimpse the Arabian sea and, behind the haze on the eastern side, we were assured, lay the famous Western Ghats. My father was so intrigued by a “scare crow” type figure on a new house being constructed we stopped to have it photographed. A child of lingering superstition, it is meant to keep off the evil eye, we were told. The consolation is that it is less common that it used to be.

The delicious tender coconut we had from the roadside was refreshing. Abbas, the vendor, declined a tip and told us that he had a job in Kuwait and, on holiday, was looking after the stall for a friend. He offered us a paper straw to drink with and said that a group of people had come to the stall and talked about the ill-effects of plastic. That was why they had shifted to paper, not because plastic straws were not available.

Our final stop was Shankhumukham, the famous beach. I had hoped to bathe in the sea, but was dissuaded from doing so. I did paddle for a while, though. It was most enjoyable. We walked around for some time, observed kids playing all along the beach and a lovely sunset before returning. Our friend Khyrunnisa, Vijaya Kumar’s wife, could not accompany us, since she had a group of school children to address.

A second surge of life happened after MBIFL ended on Feb 2nd. On Monday, I had an interactive session for 70 students of 6-8th standard of Navajeevan Bethany Vidyalaya, Nalanchira. It was quite a novel experience. I was amazed at the alacrity with which they created storyboards as part of an exercise had I devised for them. The next forenoon, I sat in on an international seminar featuring my father in the All Saint’s College campus. Afterwards, the jury of the Booker Prize and writer-publisher, Margaret Busby and domestic violence counselor, Luke Daniels, whom we picked up from the iconic Mascot Hotel, accompanied us on the trip to Varkala.

It was a beautiful experience waiting at the lookout point for the sun to set on the cliff above the Varkala beach, where we would have a lovely swim, the next morning. But both of us couldn’t resist the urge to indulge in the pool in Deshadan resort, where we had an enjoyable stay with a fabulous piscine feast for dinner.

I had never before visited military schools before, so I had a unique experience at Sainik School, Kazhakoottam. I met with younger 8th graders, with whom I did a workshop. Hindi teacher Shambu R helped in conducting it. The students were very attentive and creative when working on the task I gave them. Later I met the older cadets, who were very enthusiastic, friendly and very nice to talk to. The visit concluded with a tasty lunch in the canteen simultaneously with the cadets.

It was a long drive down to Kanyakumari but with many beautiful sights along the way, including lakes and mountains, before we reached the southern-most point in India to see the setting sun above the ocean and sea. It was also setting on my first trip to Kerala, hopefully an augury of many more future sunrises in this land of coconuts.

Theo Kourkov (born 1999), son of Andrei Kurkov, renowned writer in Russian from Kiev, Ukraine; is a young animator finishing his bachelor’s degree in Budapest, Hungary, with a one semester experience in Limerick University, Ireland. Particuarly interested in stop motion/ puppet animation, he has produced several short animated films. He has a background in amature theatre from an early age, and likes reading, playing the guitar, cooking and baking.

The plight of Ukraine, through Kurkov's words

People in Kyiv were woken up by explosions at 5 o'clock in the morning, says Andrey Kurkov