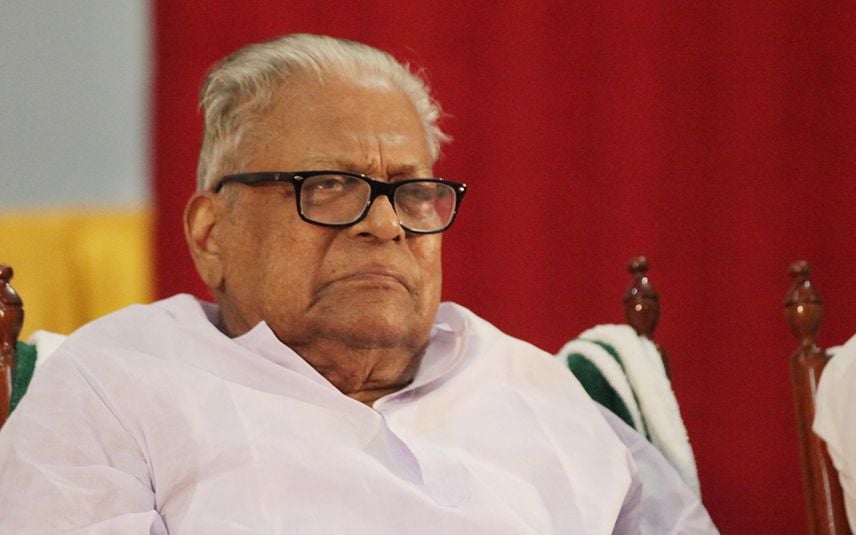 VS Achudanandan I Photo: Mathrubhumi

Revolutionary commitments or struggle against colonial rule has brought many from lower middle and working class surroundings not benefitted with higher education, rise to top leadership levels. We have seen how Kamaraj Nadar, Giani Zail Singh reached top levels in spite of many hurdles through their commitment to values and ideology they trusted. There are many such leaders in present day India too. Take the case of Prime Minister Narendra Modi, who began as a “tea vendor” while a lad and rose to the highest position in India through his own commitment, though many may not agree with his ideology and style of functioning. In Kerala one such unique leader is Vellikkakathu Sankaran Achuthanandan, popularly referred to as VS, whose commitment to revolution and follow up actions made him rise to top positions like Chief Minister of the state and Secretary of the Communist Party of India (Marxist), Kerala Unit.

There are other leaders who belonged to an affluent background and renowned family, Late Pandit Jawaharlal Nehru benefitted by education in reputed educational institutions in the United Kingdom took part in the freedom movement and rose to the position of Prime Minister of India, holding the position for over one and half decades till his death. Nehru believed that democracy has made revolution superfluous after Independence and how it meant the complete opposite of a bloodless change. The Supreme Court of India a few days back, hearing the bail application to Umar Khalid and denying bail observed that a “revolution” by itself isn’t always bloodless. That is why it is contradistinctly used with the prefix, a “bloodless” revolution. Be that as it may, the Communists world over have not abandoned the bloody revolution, though in India they have learned to live with the democratic system, leaving the violent strategy to Maoists and Naxalites and some other nomenclatures. Some veterans within the Communist movement functioning under the provisions of our Constitution may or may not have ruled out violence, as a means, in their objective to achieve revolution. Briefly put, VS reached high positions in spite of limitations through hard work and total commitment to the ideology, unmindful of the revisions that have taken place as per time and space in the country.

When I met him after taking over as Editor of the Mathrubhumi in Kozhikode, I remarked cheerfully while settling for tea that in Delhi he was known as a Stalinist. A cheerful VS said that he believes in the Communist philosophy and functions accordingly. Years later Sitaram Yechury, General Secretary of the CPIM, referred to VS as the Fidel Castro of Kerala, while announcing the name of Pinarayi Vijayan as the Chief Minister. For Achuthanandan, who successfully led the campaign in the assembly election, it was a poor consolation prize. Reference as Fidel Castro of Kerala was poor consolation from the earlier description as “Stalinist” some feel. More so when it came from Yechury who used to extend his helping hand whenever Achuthanandan was getting lonely in the party.

VS, who is 99 today, had to end his education at the middle school level and joined the working class movement in Alappuzha. His life then on has been linked to the Communist movement in the state, including Punnapra-Vayalar uprising. He is the oldest Communist leader in the country. He walked out along with 32 other party leaders from the National Council meeting CPI in 1964 to form the Communist Party of India (Marxist). Then on he remained an ardent and disciplined Communist in spite of pursuing his own persuasions of the party ideology.

A brief history of CPIM may not be out of place as life of the eldest leader of the CPIM has its links to the history of CPIM in Kerala. Though CPIM grew in spite of problems with the authorities even at the Centre, it grew steadily though slowly in the early years. Later when M.V. Raghavan, a veteran from Kannur, gave a different party line with the support of a sizeable section of the party other veterans including E.M.S. Namboodiripad came together and in short showed the door to Raghavan. Later there was some opposition to EMS and he too was more or less censured by other veterans in the state and supported by Harkishen Singh Surjeet, party general secretary. This led to VS heading the party at the state level.

But VS had a style more of a maverick and did not resort to building up of an effective group. Soon many senior leaders supporting him deserted and joined Pinarayi who was known for keeping the flock together and happy. Within a few years VS though enjoyed popular support but was getting isolated within the party which developed into the Kannur group taking over the party with Pinarayi as the leader. In this the central leadership though took an impartial position and did help the Pinarayi led group at the final round giving the good old Alappuzha leader the status of distinguished leader, describing him as the precious possession (Swathanu).

The point is everyone accepted that Achuthanandan is the best in campaigning thanks to his popularity with the masses and his style of oratory – delivering zingers followed up with chosen attacks to hurt the political opponents, unique delivery with musical ragas on classical style and taking up popular issues and unsparing deliveries on the corrupt and immoral ones. But the beneficiaries of electoral victories used to be his rivals within the party! Shockingly even after all that to give him the promised position as Chairman of the Administrative Reforms Commission there was hesitation and Yechury had to intervene. But even after ten months the Chairman, members and staff of the Commission did not receive salaries and again central intervention was needed. It is perhaps natural. Rivalries within the party are more virulent and determined than political rivalries outside.

Attacks by Achuthanandan on the leaders indulging in corruption, immoral activities, administrative failures and misuse of authority spared none. In few cases protracted litigation continues. Many became uncompromising rivals. Some attacks by Achuthanandan were not appreciated too. Though he got isolated among politicians of all hues, his popularity was not affected and he remained one of the best liked political orators, loved by the masses and trusted too. Unfortunately, due to health reasons his movement outside got restricted. But his electrifying deliveries, zingers and attacks on the failing leaders and immorality in politics are fresh in the memory of the millions cutting across party affiliations, yes but rivals too are there.

Achuthanandan however is a committed party member which nothing can change, even isolation and attacks within. When badly humiliated many suggested that he should quit and go on his own way. But leaving the party is not his way. He is a disciplined Communist and commitment cannot change. Though a maverick he continues to enjoy popularity. Some may disagree but he is best as a Communist maverick. Yes for the CPIM in Kerala too !!

(The author was former Editor of Mathrubhumi)

'Kerala Castro' VS Achuthanandan fails to vote for first time

Survivor Friendly Court Rooms, Chapter 5: I, the survivor, testify before ...