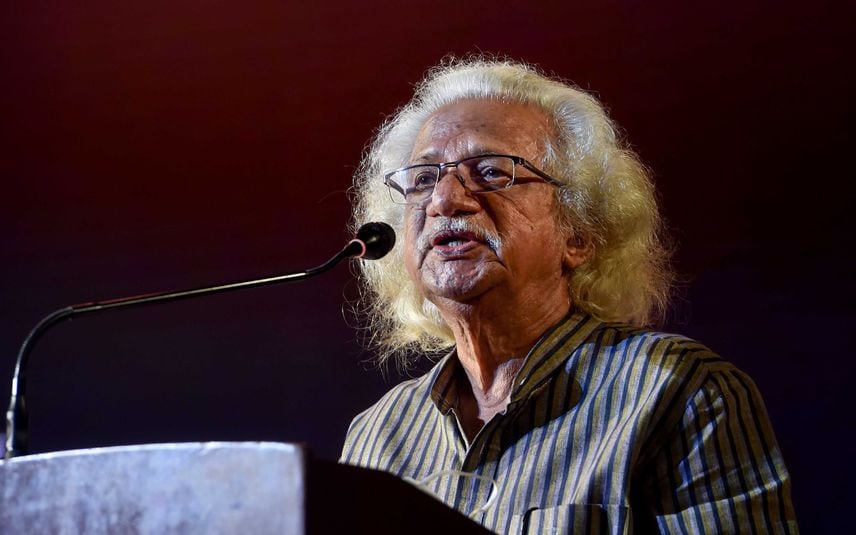 No film of Adoor Gopalakrishnan has the trace of his previous film, at least from 'Swayamvaram- One's own choice' till Vidheyan -The servile. This uniqueness is not just in the style or content, but in its period of time and cinematic vision. Apart from sculpting the relevant period the most authentic way, each of his films remains a milestone of Malayalam films in its tryst with global fame. Adoor is a unique creative innovator of films among us, alive today, with as many as six world class films putting him and his Malayalam films among global bests. Incidentally, he is the only other filmmaker to be honoured by the oldest Film Institute of the globe, The British Film Institute, with a trophy in their founder's name of Sutherland, along with Satyajit Ray. In Asia only two of them along with Akira Kurosawa of Japan have been honoured with this trophy, so far. That is the unique position Adoor enjoys among the global film makers explaining why he got a retrospective of his films in prestigious international venues like the Smithsonian Institution in Washington, USA, Cinematheque in Paris, Lincoln centre at New York and film festivals of La Rochelle, Pesaro, Fairbourg, Lyons, Ljubljana and Munich. Honours like Dada Saheb Phalke Award, Sutherland Trophy of British Film Institute and Commander of the order of Arts &amp; Letters of France have been bestowed on him for his films.

His first film, Swayamvaram, made in 1971-72 and released on 24 of November 72, portrayed the huge uncertainty the young educated people faced during those days. The film depicted the uncertainty and upheavals of the times in the most visual and realistic way. It starts as a romantic story of a couple eloping and trying to build a new life for them in a city and ends with one dying during his struggles and another, the woman left to face the uncertainty ahead with a kid. The experience of the lead character Viswam, holds the mirror to the Kerala society of those days. The ambience of the hotels, the lower middle class dwellings, the tutorial college, the sow mills, the suspended worker, the ailing colleague and then the waiting wife and arrival of the kid is portrayed with the typical visuals of the period and ambience sounds that even today, the life of those times comes alive while watching the film.

Swayamvaram was no accidental film of a fortune seeker in films. Adoor, the 1965 batch Film and Television Institute of Pune, after having experienced the world film classics and done his diploma films, has been preparing himself and the Keralites for such a film from the word go. His Chitralekha film society which was flagged off by Governor Bhagavan Sahay in 1965 was nurturing the audience in Kerala for such a film, just as Satyajit Ray prepared the Bengali audience for his Pather Panchali. By 1972, the film society movement had spread to almost all urban centres in Kerala and the discerning audience was ready for a film like Swayamvaram. No producer of those times was willing to risk his money for such a film and hence Adoor and his film society friends formed a film co-operative to make the film. With the loan from the public sector Film Finance Corporation -FFC- predecessor of National Film Development Corporation, the first film cooperative of India was able to achieve its dream project. But at the initial release, the audience appeared confused to receive such an experiment, but after the film bagged four national awards, including that of best film and best director of the year, they embraced it wholeheartedly making it a box office success and giving the film the unique honour of paying back the FFC loan. It is said very few FFC financed films of the new wave have paid their loans back and Swayamvaram tops the chart.

Adoor the filmmaker continued his creative innovation with his second film, Kodiyettam-The Ascent- in 1977. If Swayamvaram, as a struggle with harsh realities, Kodiyettam was a film of how a countryside person wakes up to his harsh reality amidst the cacophony of daily chores of life. No wonder the lead character portrayed by Gopi got the national best actor award of the year and Satyajit Ray became a big admirer of Adoor after seeing this film minus any background music. The film too was a huge commercial success in Kerala, even though Gopi the lead character is a balding middle aged man. Kerala, the audience, embraced the authentic portrayal of their countryside and giggled over the many follies of the character Shankaran Kutty ensuring Chitralekha laughed all the way to a box office success, which enabled them to build their own studio with equipment in late 70s.

Elipathayam-The Rat trap-, Adoor's third film made in 1981, after his parting ways with Chitralekha film cooperative, is described as a 'classic' by not just the British Film Institute, but by Cuban Filmmaker Thomas Alea during a visit to India in 80s. The first colour film of Adoor broke the style of all his other films and he portrayed a man caught in the web of tectonic changes around him, equating his plight as that of a rat in his own traditional house whose doors crack like that of a rat trap. The intertwining of characters with the theme of the film and the rat with haunting theme music put Adoor firmly in the list of global auteur filmmakers.

In MukhaMukham- Face to Face, released in 1987, he handled a political subject, but without making it a political essay on the split of the communist parties of Kerala. Despite the strong adverse response of Kerala's communist parties, he insisted that it is not about the politics of the Left, but on the plight of leaders after the split of 1964. The film was noticed by the Eastern bloc countries of 80s and a leader, almost like a lead character of his film, visited Adoor one fine morning giving a huge surprise to the film maker. Leftist veteran of arts Thoppil Bhasi was the only one who admired the film, saying the film was a call for introspection of the communist leaders about their goals and the process of achieving it. Here too Adoor's choice of the subject and portrayal of the period of communist uprising in Kerala and their plight after the split of the communist parties in a humane way makes the film unique and original.

Anantharam- Monologue- made in 1987 for many is a psycho-analytical film, going to depth of an adolescent man. But for Adoor it is his imagination of an abandoned boy growing up in a hospital into his adolescent days and beyond. The doctor who adopted him gives all physical support, but his mind travels to unknown places as he starts growing up. Adoor portrays this increasing realization of the character through different angles of Ajayan, the leading man, making it a unique experience of watching films. Though he says it is telling a story from different angles, the angle itself becomes an analytical tool to trace the various phases of the protagonist's growth as a boy to a man. Many consider it as one of Adoor's most difficult films, but connoisseurs consider it a brilliantly structured one.

Mathilukal -The walls- the 1990 film added yet another golden touch to Adoor 's oeuvre. The story of Vaikom Muhammad Basheer, the iconic writer of Malayalam and a brilliant performance by Mammootty as the incarcerated writer himself, during pre-independence days enabling the actor to bag his first national award for acting, was yet another touch of creative innovation by Adoor. The films' heroine was an invisible prison mate, whose seductive voice is heard, making the hero and the prisoner forget his lack of freedom. When he is released from prison, the writer wonders about the meaning of freedom, as he has started enjoying his prison days and a longing to see the lady love. Adoor, thus made a statement of the wider concepts of political freedom and that of the individual, immortalizing the great writer Basheer and actor Mammooty who portrayed him in the film.

Videhayan -The Servile- the 1993 film is yet another innovation of Adoor, the auteur, based on a novelette of Paul Zacharia, the Malayalam writer. The film as Adoor says is with a wild energy with its theme and characters, was shot entirely outside Kerala and had Mammootty as the cruel Patellar, the tax collector of erstwhile British ruled South Canara. The Patelar is caught in the past and still continues to impose his feudal powers on the poor farmers, but the new law and system of free India catches up with him after he kills his wife, who pricks him like his unidentified conscience. Finally he succumbs to the bullet of the killers sent by his brothers-in-law and the man who considered himself as a slave of the Patellar finds himself being treated equally before his death. This leaves the servile man whether to celebrate his freedom or mourn his master's death. The film is full of action unlike other Adoor films and Mammootty excels as a Patellar to bag yet another national award for himself.

Though Adoor’s six films from Kathapurushan -The man of the Story- to Pinneyum-Again- has his distinct style and craft, his creative innovative approach appears to bear some wear and tear. Going by the critical acclaim and excitement the films created in Kerala, nationally and internationally in terms of appreciation and honours, one can witness a certain creative fatigue setting in the master filmmaker.

Though Adoor says, at a given time he made the best film he could and each of his films as his best, for those who are used to his creative innovation, in the first six of films, the rest of the six is a growing disappointment as the expectations created by the first six were sky high. The only solace is that creativity of an auteur is a dynamic process, not a mechanical one which can be manufactured or created out of external factors. Adoor remains the best creative innovator in films of his prime age and time period of his first film till today. And the fact that he has made only 12 feature films and about 25 shorts and documentaries in 50 years stands to the testimony that every film was a huge creative effort from his side. The results of these efforts may be uneven, but the first six has put him on the global map of the auteur filmmakers, a first for any Malayalam filmmaker in such numbers. One can easily conclude that in the last 50 years, Adoor's innovations in films have put Malayalam films, along with not just other Indian films of creative nature, but of the world, making him the worthy successor of the other global film maker from India, Satyajit Ray.

Will Adoor’s Elipathayam find a place in Sight & Sound Greatest Films of All Time?