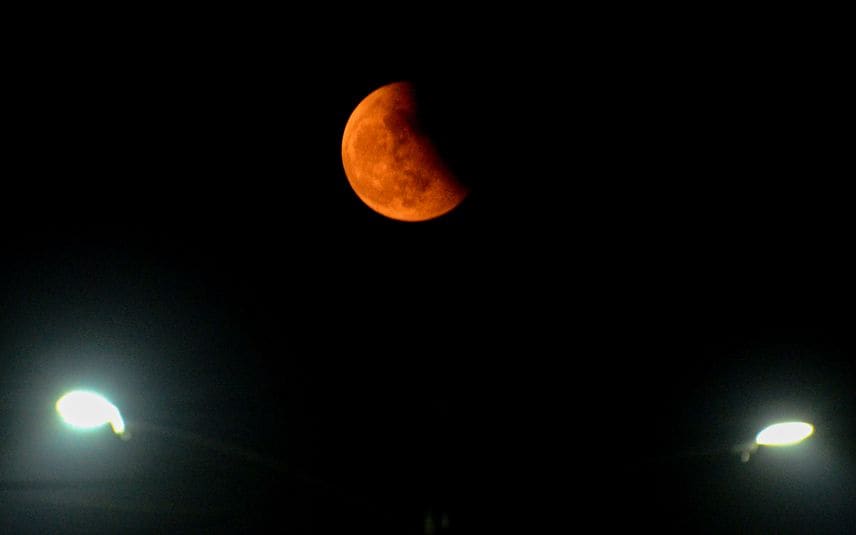 New Delhi: Stargazers across the country were treated to a visual delight as the earth cast its shadow on the moon in the last total lunar eclipse of the year on Tuesday.

Northeastern parts of the country such as Agartala, Kohima, and Guwahati were able to catch a glimpse of maximum obscuration of the lunar disc as the moon had already risen on the eastern horizon before the end of the totality phase at 5:12 pm.

A total lunar eclipse occurs when the earth casts its shadow completely over a full moon, blocking reflection of all direct sunlight from the lunar orb and dimming the colour of the moon to a reddish hue.

From most parts of India, stargazers could observe a partial lunar eclipse only as the moon rise timings across the country were during or after the total phase.

Astronomy enthusiasts and star gazing clubs had set up telescopes across cities to watch the celestial phenomenon unfold.

In Delhi, smog-filled sky denied stargazers the opportunity to view the eclipse at moon-rise and a hazy lunar orb was visible in the national capital late in the evening.

For other cities such as Mumbai, Chennai and Bengaluru, skywatchers could witness the partial phase of the eclipse.

As the time of the moonrise in Assam was later than that of the start of the eclipse, the initial phase of it was not visible, Guwahati Planetarium curator Babul Bora said.

“The lunar eclipse began at 2.39 pm. But the moonrise in Guwahati was at 4.34 pm, hence the phenomenon was visible only after that here,” he said.

Aryabhatta Research Institute of Observational Sciences, Nainital, the Indian Institute of Science Education and Research, Kolkata, the Homi Bhaba Centre for Science Education, Mumbai, and the Jawaharlal Nehru Planetarium, Bengaluru were among some of the institutes that had set up telescopes to watch the eclipse and organised webcast of the celestial phenomenon on their social media accounts.

The next lunar eclipse which will be visible in India is on October 28, 2023, and the same is a partial eclipse.