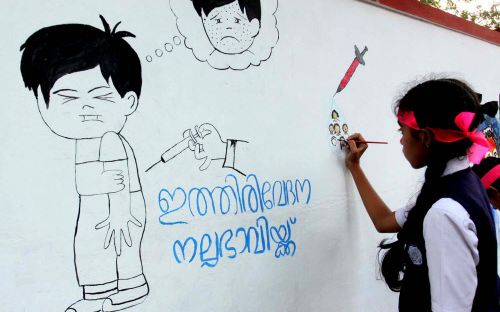 Kozhikode: The outbreak of measles, a highly contagious disease, in Malappuram in Kerala, has posed the question of whether the district is up to witness a medical emergency. The gravity of the situation can not be missed as measles is one of the easily transmitted viral respiratory illnesses, which is distinctly infectious among children.

Over 150 cases of measles have been reported in several pockets of Malappuram, including Pookkottur and Kalpakanchery, predominantly among the age group 5- 9. The sudden upsurge in measles cases could be attributed to the decline in vaccination rates, said Malappuram District Medical Officer N Renuka. Though the district achieved a vaccination rate of 87 per cent defending the vaccine reluctance generally prevalent here, the rate of the Universal Immunisation Programme (UIP) witnessed a decline due to Covid-19. The pandemic and the subsequent lockdown caused fear in the public to arrive at hospitals, especially with their children for vaccination.

A report jointly published by the World Health Organisation and the United States Centre for Disease Control and Prevention pointed out that 25 million children worldwide missed the first dose of the measles vaccine, while 39.7 million children did not jab the second dose of the vaccine in the wake of Covid-19.

Apart from this, the reluctance of certain communities to administer vaccines due to the suspicion regarding their content and high dependency on naturopathy and homeopathy have also led to a decline in the vaccination rate in Malappuram, said the DMO. A similar eruption of diphtheria in Malappuram six years back also pointed out the lapses in vaccination then. Three deaths were reported in the district and the census revealed the shocking news that one child out of every three children in the age group from 5 to 16 was unvaccinated in the district.

Though schools are directed to check the vaccination status of children during admission and carry out necessary measures for unvaccinated children, the absence of clear-cut guidelines remains a challenge, which has to be addressed. The vaccination history of children is usually recorded during admission. However, those children, who are unvaccinated under the Universal Immunisation Programme cannot be directed to take the vaccines for obtaining admission, said Ushakumari M, a teacher at Govt Higher Secondary School, Chennamangallur. Often schools conduct vaccination camps to ensure vaccines that have to be inoculated at certain ages. However, some parents refuse to administer vaccines to their children, and in such cases, the parents are directed to inform this in a written format, so that the school authorities can retain it as a record.

The measles virus takes nearly two weeks to spread in the body, which would be generally a non-symptomatic period. Moderate signs of infection surface later, and soon after 2 to 3 days, distinct symptoms such as high fever with temperature spiking to over 104 degree, fatigue, cough, runny nose, red eyes and rashes all over the body would appear, said Dr Jiji Mary Antony, HOD (in-charge) of Pediatrics at Govt Medical College, Manjeri.

The virus easily transmits through the infectious droplets sprayed while the patient coughs, sneezes or even talks. In addition to this, its ability to hang in the air for over an hour makes it an extremely infectious disease. Measles can turn deadly in the rarest of the most severe cases causing neurological infection, respiratory complications, bronchitis, pneumonia or encephalitis. The high-risk category for such complications are infants, children below 5 years of age with weak immunity, pregnant women, and patients with compromised immune systems due to life-threatening diseases. The mortality rate is even lower for elders and children with better health and immunity.

At least 97 per cent of protection can be ensured with the two doses of the Measles-Mumps-Rubella (MMR) vaccine, informed Dr Jiji Mary Antony. The first dose of the vaccine is usually administered at 9 months of age, while the second dose is at 15 months of age in the state. Later, a booster shot also follows at the age of 5.

DMO of Malappuram told mathrubhumi.com that the need of the hour is to tackle the spread of the virus as soon as possible. As the measles virus is mainly infecting the children here, guidelines have been issued for the schools to follow. Soon, the health department will launch an awareness programme to address the issue of vaccine refusal with the cooperation of the local bodies and health workers. Vaccinating the partially vaccinated and unvaccinated persons after taking a head count will be taken up as a mission under the department of health, said DMO.