Congress leader Rajmohan Unnithan is sure he will have a headstart in the Kerala assembly polls next year if he contests. That's because two of his Malayalam films will hit the screens at campaign time! Unnithan, 57, is already shooting for the two films - 'Uppukandam Brothers - Back in Action'...

Congress leader Rajmohan Unnithan is sure he will have a headstart in the Kerala assembly polls next year if he contests. That's because two of his Malayalam films will hit the screens at campaign time! 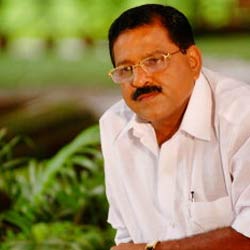 Unnithan, 57, is already shooting for the two films - 'Uppukandam Brothers - Back in Action' and 'Navagetherku Swagatham' - his 11th and 12th films respectively. He is known for his dialogue delivery.

'I have been signed up for one more film and after that I don't think I will have time to do any more films because by then, I will be busy with the elections,' said Unnithan, who hopes to contest from Kollam constituency.

'I'm sure that with three films being screened during election campaign time, it would certainly give me good visibility!'

He shot into prominence at the height of the factional feud in the Congress in the early 2000s and stood firmly with K. Karunakaran and his son K. Muraleedharan, but in 2004 he turned against the father-son duo.

Soon after splitting with Karunakaran, he found his way into Malayalam filmdom and acted in a number of films, thanks to his oratorical abilities.

His stardom helped him become a candidate in the May 2006 election where he gave current Home Minister Kodiyeri Balakrishnan a run for his money at the latter's home turf in Thalassery in Kannur district.

The politician-turned-film star expects that by the time both his films are released, the state would be in the grip of election fever and he would get a headstart in his election campaign.

'I am confident that if I get to contest in the next assembly polls, I will win,' Unnithan told IANS at the shooting location of 'Uppukandam Brothers' in which he plays a central role.

'I have contested twice against top Communist Party of India-Marxist (CPI-M) leaders. The first was when I defeated (current Education Minister) M.A. Baby for the post of SN College Union chairman in 1974, the other time was when I gave Balakrishnan a tough time, even though I lost.'

Congress Chief Minister Oommen Chandy also said that in the past few days, TV channels had been showing news clippings of Unnithan.

When a film becomes a touch of solace...

What happens when a country is gone

Digital is future, KITE is here to stay: Anvar Sadath

Coral Reefs: A closer look into the diverse marine ecosystem