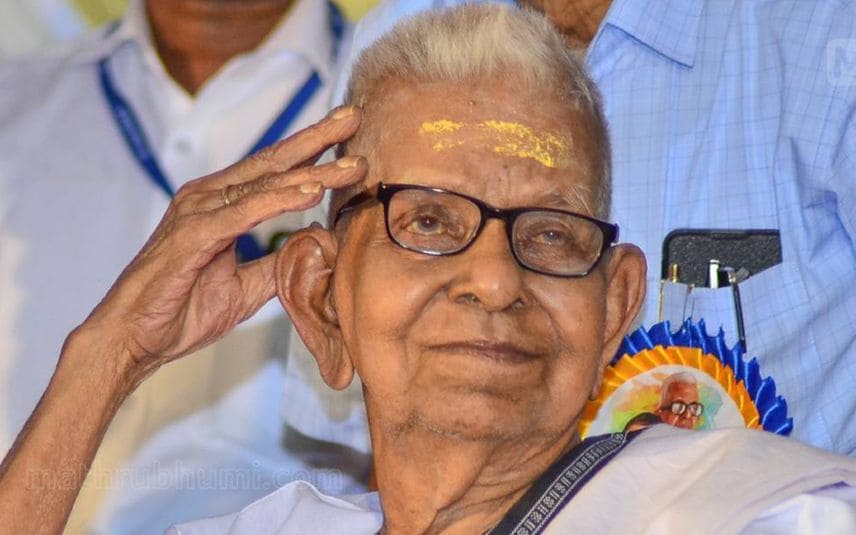 Thrissur: Renowned Malayalam poet and Jnanpith laureate Akkitham Achuthan Namboothiri passed away on Thursday morning. He was 94. Akkitham was undergoing treatment in private hospital in Thrissur for age related ailments for the past few days. The death was declared at 8.10 am.

Akkitham was born to Vasudevan Namboothiri and Parvathy Antharjanam on March 18, 1926 at Amettu Akkithathu Mana in Kumaranellur of Palakkad. He was taught Sanskrit, music and astrology at a very young age. He published the magazine 'Unni Namboothiri' for 3 years from 1946 and later became assistant editor of 'Mangalodayam' and 'Yogakshemam'. He also worked as script writer for Akashavani Kozhikode station since 1956 and became editor at the Thrissur station in 1975. He retired in 1985. Akkitham was married to Sreedevi Antharjanam who died in 2019. He is survived by a son and a daughter.

Akkitham is the 6th Malayalam writer who bagged the Jnanpith Award. He received the honour in a small ceremony held adhering to COVID protocol a few days ago. Earlier, he was honoured with Padma Sri, the fourth highest civilian award of the Government of India in 2017.