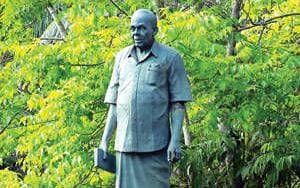 A statue installed in Thakazhi memorial

Ambalappuzha: The 110th birth anniversary of Thakazhi Sivasankara Pillai, litterateur of Kuttanad, who upheaved Malayalam classics to the array of world literature is observed on Sunday. Sivasankara Pillai was born on April 17, 1912 at Thakazhi and had penned 39 novels, 23 collections of stories, an autobiography, memoirs, plays, travelogues and many articles. A conference in relation to his birth anniversary will be held at Shakaramagalam in Thakazhi on Sunday.

Thakazhi’s first work was ‘Thyagathinde Prathiphalam’ published in 1934. He later wrote ‘Randidangazhi’ (Two Measures), ‘Chemmeen’ (Prawns), ‘Kayar’ (Coir) and ‘Anubhavangal Paalichakal’ which hailed him as a stalwart of Malayalam literature. The cinematic version of ‘Chemmeen’ won the Swarna Kamalam award which is a national award for Best Movie in 1965.

Following the demise of Sivasankara Pillai, his residence at Shanakarmangalam was turned into a museum by the state government. Though 25 cents of land adjacent to this property was bought from the writer’s family and a stone laid in 2011, no other construction works took place later.

MP Kodikunnil Suresh will inaugurate the function on birth anniversary celebrations at 4 am. The memorial committee chairman will hand over the Thakazhi award of 2022 to Dr M Leelavathy.

25 years since first mobile phone call was made in Kerala