Edakkara Janamaithri Police had conducted a poetry competition. 24 poems selected from the entries were included in the book. 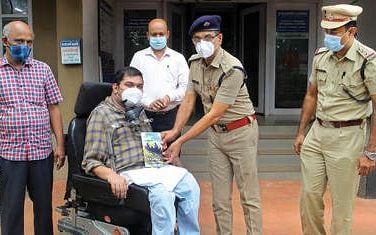 Malappuram: Edakkara police released a collection of poems penned by the people during COVID lockdown. The book titled ‘Athijeevanam’ was released by District Police Chief U Abdul Kareem by handing it over to artist and social worker Jesfer Kottakkunnu.

Edakkara Janamaithri Police had conducted a poetry competition. 24 poems selected from the entries were included in the book. Mujeeb M Muhammed, Rama Vadassery and Ajmal Hussan had won first three places in the contest.

Earlier, the stories written by police officials from ADGP B Sandhya to civil police officers were published as a book. Edakkara police initiated collection of poetry being inspired from this.