Set in the backdrop of a murderous civil war in Sri Lanka, Karunatilaka’s ‘The Seven Moons of Maali Almeida’ chronicles the afterlife story of Maali Almeida, a war photographer, gambler and closet gay. 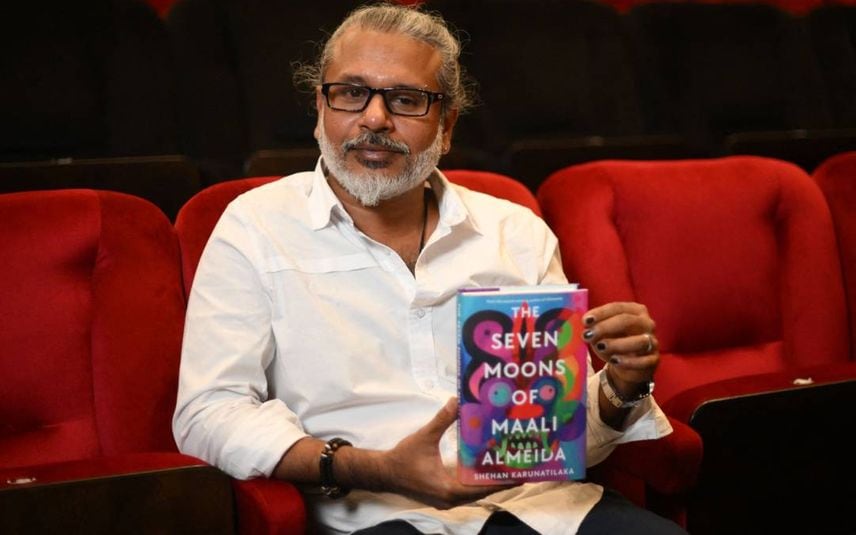 'The Seven Moons of Maali Almeida', a metaphysical thriller entangling the heinous horrors of Sri Lankan civil wars, written by Sri Lankan author Shehan Karunatilaka, has been awarded the 2022 Booker Prize for Fiction.

Shehan Karunatilaka, a writer of rock songs, screenplays and travel stories, emerged onto the global arena of literature through his debut novel ‘Chinaman: The Legend of Pradeep Mathew’, in 2010. The book, which won the Commonwealth Prize, the DSL and Gratiaen Prize, was declared the second-best cricket book of all time by Wisden. He is also the author of the children’s book ‘Please Don’t Put That In Your Mouth’, published in 2019.

Born in Sri Lanka’s Galle in 1975, Karunatilaka spent his childhood in Colombo. He studied in New Zealand and has worked in London, Amsterdam and Singapore. In addition to being an author, this 47-year-old Booker Prize winner has also worked as an advertising copywriter and played guitar in a band called Independent Square.

Set in the backdrop of a murderous civil war in Sri Lanka, Karunatilaka’s ‘The Seven Moons of Maali Almeida’ chronicles the afterlife story of Maali Almeida, a war photographer, gambler and closet gay. Structured as a whodunit, the novel revolves around the challenges and ethical dilemmas of Maali, who is tasked to solve his own murder mystery.

According to the Booker Prizes’ website, ‘The Seven Moons of Maali Almeida’ not just dissolves the boundaries of different genres, but also of life and death, body and spirit, east and west. What the judges particularly admired and enjoyed in the novel is the ambition of its scope and the hilarious audacity of its narrative techniques.

“It is an entirely serious philosophical ramp that takes the reader to the world’s dark heart - the murderous horrors of civil war in Sri Lanka”, said Neil MacGregor, Chair of the 2022 judges.

Karunatilaka began thinking about Maali Almeida in 2009, after the end of the civil war, when there was a raging debate over how many civilians died and whose fault it was. However, the idea seemed bizarre at the time.

“A ghost story where the dead could offer their perspective seemed a bizarre enough idea to pursue, but I wasn’t brave enough to write about the present, so I went back 20 years, to the dark days of 1989”, he said.

“I borrowed from a lot of mythologies and also the idea that the spirit hovers around for seven days. You see that in different forms of Buddhism and other eastern religions. But the real breakthrough was seeing the afterlife as a visa office, as a government bureaucracy with spirits wandering around, not knowing where they are supposed to go,” opined the author.

With his glorious achievement, Karunatilaka has become the second Sri Lankan author to win the Booker Prize after Philip Michael Ondaatje, who took the trophy in 1992 for ‘The English Patient’. His work has been published in numerous acclaimed magazines such as Rolling Stone, GQ and National Geographic.