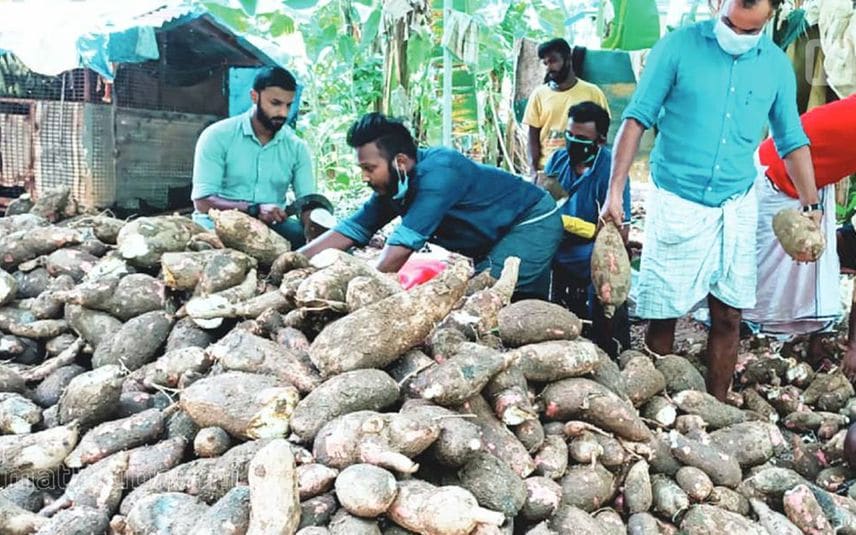 DYFI workers preparing for free distribution of tapioca in Kalikavu

Kalikavu (Malappuram): The scarcity of food items during the lockdown period has been resolved by tapioca. When jackfruit was the iconic food during the first wave of Covid, tapioca has taken the place during the second wave.

The farmers said that rainfall will destroy the tuber. First, the price of tapioca was Rs 20. But it dropped to Rs 12 now. Some voluntary organisations are purchasing tapioca for mere Rs 8 and distributing it to public for free.

The families also are not willing to waste the tapioca season. They experiment different tapioca recipes like curry, payasam, Puttu, biryani, fried items, snacks and desserts. Many are of the opinion that tapioca dishes are way better than jackfruit.

People who remain at home after losing job find the arrival of tapioca a boon. The demand for jackfruit dropped as its sweetness declines after the onset of rain. Also people are attracted to tapioca as it is available for cheap rate now and sometimes for free.

Though customers are happy, tapioca farmers are in trouble. They cannot delay harvesting as rain has started early. The tuber will perish as the farms turn into puddle during monsoon. So, they are compelled to sell tapioca for Rs 8.

When there are no buyers even at cheap rate, sometimes they have to give away the crop for free. The intervention of voluntary organisations helped the farmers to an extent. However, they are unable to get back the invested amount.