It is a belief in Attapady tribal that sunflowers are as glowing and auspicious as the sun and it brings prosperity to the villagers when it blooms. 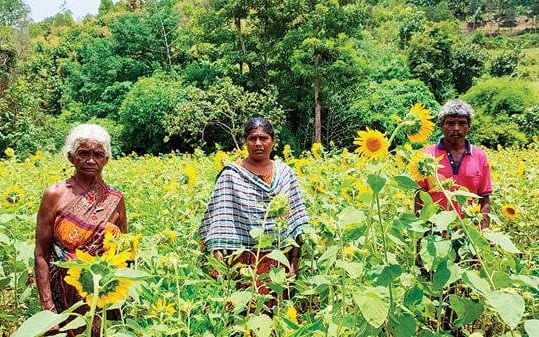 Maasi Moopathi with her son Veeran and daughter in law Pushpalatha

Agali: Maasi is enthusiastic than anyone to harvest the blossom of sunflower even in her seventies. Maasi Moopathi (75) have been doing sunflower cultivation for the last two years with her son Veeran and his wife Pushpalatha.

Attapadi tribal people believe that sunflowers are as glowing and auspicious as the sun and it brings prosperity to the villagers when it blooms. Maasi started sunflower cultivation with 750 grams of seeds and the output was 7 kg of seeds which gave her immense confidence in horticulture.

She has been farming all these in her 25 cents of land where not even proper irrigation facilities are available. Maasi is a ‘green’ farmer as she only uses cow dung as manure in her fields.

She also has found out that the sunflowers can attract all the pests that attack other crops. Hence, there is no need of using pesticides.

Veeran says that sunflower cultivation is a profitable business and they are planning to cultivate just sunflower in this land by next year after shifting all other crops to the 3 acres near the valley.

20 years back, sunflower cultivation was quite common in the Nayikkarpadi, Goolikadavu and other villages.

As there are no oil extracting mills in Attapadi, Maasi has to take the seeds to the mills near Coimbatore.