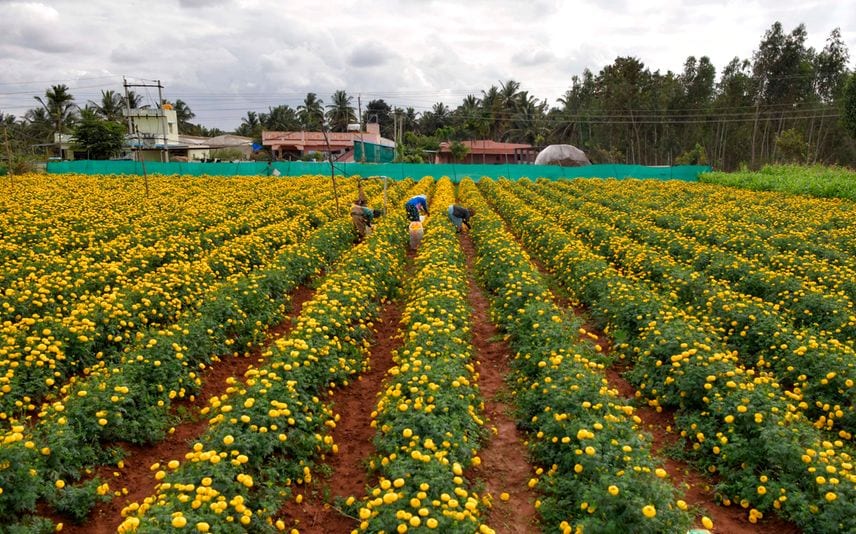 Kochi: The Kerala Government, through its farming department Cheranalloor Krishi Bhavan, has started promoting the farming of Marigold flowers among locals, ahead of the Onam festival. The aim behind this is to use the flowers for making floral carpets and other ceremonial decorations during the Onam season.

Usually, Kerala used to import the bulk of flowers, especially marigolds from the neighbouring states like Tamil Nadu and Karnataka, but this year, the government's farming department Krishi Bhavan has been providing saplings and fertilisers to the farmers, who were willing to cultivate marigolds for the season.

Shyja KS, the Agricultural Officer of the Cheranalloor Krishi Bhavan informed ANI that this project is a part of the public planning project.

"Cheranalloor Krishi Bhavan has implemented this project under the joint auspices of Cheranalloor Grama Panchayat and Edapally Block Panchayat as part of the public planning project. This year, because of favourable weather, we were able to start the project in the second week of June. The project was successfully completed and the harvest time coincided with the Onam season," the officer said.

Shyja also talked about how the project was implemented in groups and they are planning to continue it in other areas.

"We implemented this project in several groups. The youth and 'Kudumbashree' workers came forward for cultivation. We supplied saplings, fertilizers and dolomite to the local farmers. They have been getting orders and I think the sales too would be good in the coming days. We are also planning to continue the cultivation in more areas," the officer told ANI.

The farmers seemed quite satisfied with the results. More than the profit, they talked about mental happiness.

"Firstly, we prepared the soil, then we put the mulching paper. My family has also cooperated with me in this project. Though I am not expecting much profits this year, there is much mental happiness," Prasad, a farmer, told ANI.

"Krishi Bhavan provided us with the sapling and fertilizers. They also used to visit us weekly. This year 700 saplings have been planted and the flowers would be booming by the time of Onam," another farmer, Vidhu, said. (ANI)