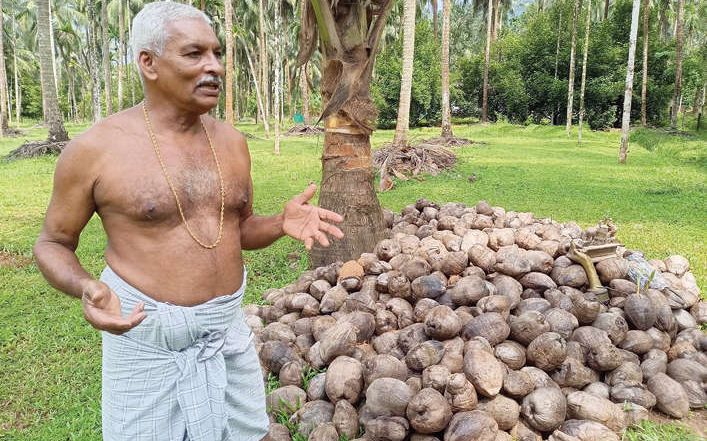 Abraham Mathew explaining the woes of being involved in agriculture

Kozhikode: Abraham Mathew, a native of Kozhikode who won various awards including the state government’s Kera Kesari Award for best coconut farmer, has expressed his plans to quit agriculture.

“I am fed up. I have quit agriculture. The rates of agriproducts including coconut have declined. The government which should extend a helping hand is turning a blind eye,” said Abraham with all his exasperation. He also explained how pitiable his coconut farming has been going.

“Cultivating kanthari (indigenous chilli pepper) was the only agriculture activity I had this year. That too will conclude. For the past five years, I have not harvested coconut. I'm only collecting those coconuts that fall. When it becomes a pile, I will sell it off at any rate that is provided. Sometimes, the coconut will sprout. I am not giving any attention.”

Interestingly, he opted for agriculture as his livelihood at the age of 16. He has been in the field for more than 57 years. He visited 17 countries and deployed the strategies learnt from that exposure.

In 1995, he bagged the prestigious Kera Kesari award. He has also received recognition from the Limca Book of Records and the UN. However, he became one of the people who struggle to survive in the agriculture field in Kerala. According to Abraham, many quit agriculture due to unfavourable conditions.

“All crops are incurring losses...The hike in the price of chemical fertilizers became a major burden. 50 kg of potash costs around Rs 1700. Same is the case with Factamfos,” he pointed out.