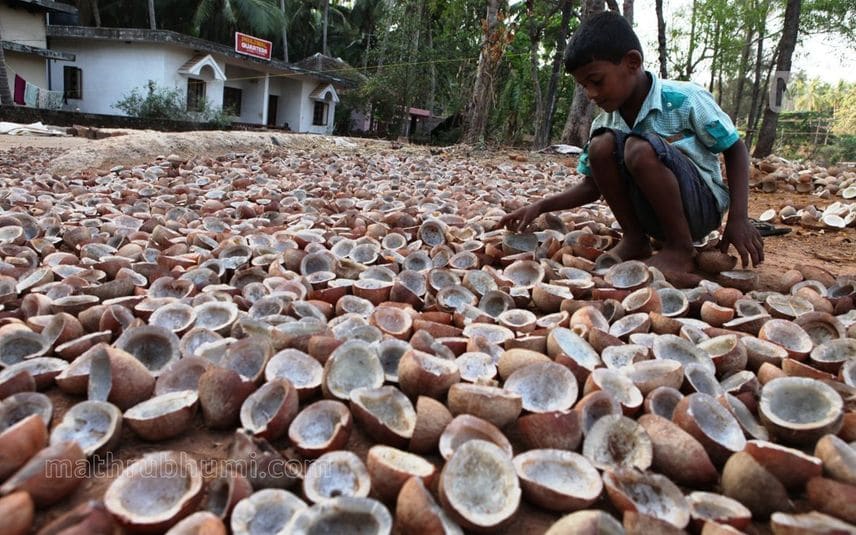 Kozhikode: Union government's mandate and low production have resulted in the pitiable procurement of dry coconut kernels (copra) in Kerala. The time allocated by the union government for the procurement will be over within two months, and in the four months that passed by, only 48 quintal copra was procured. In the neighbouring state Tamil Nadu, procurement is at 6,891 ton.

Moreover, the procurement now is in a stalled condition. The situation is so pathetic that the union government's assistance to manage the plummeting prices will likely provide no relief to the coconut farmers here. On the other hand, raw coconut procurement by the state government has also increased and this in turn affects procurement of copra.

The union government on request of the state government had approved procurement of 50,000-ton copra. This was approved in February. The support price is Rs 10,590 per quintal and if the procurement was proper the farmers in Kerala might have got more than Rs 100 crore. But as of now the farmers have received only less than Rs 1 lakh.

According to the mandate, cooperative societies buying copra for production of coconut oil cannot procure under this scheme. As a result, parties, including KERAFED, were restricted from the procurement. Though the Kerala government batted for exemption, there was no proactive response. Similarly, the state government was not able to assign a special agency for procurement.

The number of farmers involved in copra production too has drastically declined. Over this reality, the state government had directed the cooperatives to procure raw coconut and convert it to copra. However, that plan did not work.

Ginger production in Kerala down even as India witnesses 8-fold increase ...

Give due recognition to farmers: Mathrubhumi agriculture fair concludes ...