Tapioca is an emotion for Malayalis. There wouldn't be anyone who hasn't had tapioca and fish curry among Malayali foodies, which indicates its popularity. If we want to have fish curry or kantari crushed chammanthi with tapioca, it's almost Rs 50 for it. In a span of a few days, the rate has increased from around Rs 25 to 27. This increase gives hope to the farmers after last season's price fall. Meanwhile, 'Fresh Kerala Tapioca' is worth Rs 500 for 2kg on Amazon.

In rural areas, the tapioca price is around Rs 35 to 40 per kg. At the same time, it's over Rs 45 in urban areas. There is variation according to quality, but even the low-quality ones are around Rs 40. During the last season in central Kerala, the price dropped to Rs 8, which distressed the farmers. Some didn't even take the harvest due to the loss.

The farmers are happy as the price has increased and there are plenty of hotel consumers. The price hike is mainly due to demand in tapioca availability. Last year, many stopped cultivation due to the price fall. The adverse weather conditions also affected the market distribution of tapioca. Since the market is active now, the sellers aim to overcome the loss over the past two years.

The main reason for this significant price hike are the decrease in cultivation due to price fall and climatic changes. The wild boar attacks in hilly regions also impacted the price hike. The people most affected due to this are those who make tapioca products. It is challenging for them to produce value-added products by giving huge money, and the storage will also be affected.

Last year, the price fell to almost Rs 8 and the wholesale price was around Rs 15 to 20. The farmers were forced to sell tapioca at given rates, especially in hilly regions. Most of them had to directly go to the markets.

In January, the prices range between Rs 8-10 per kg. In February it was Rs 20 and it was Rs 30 in May. Since the 2020 lockdown, tapioca farming has significantly increased and the abundant availability has led to the price fall.

The price fall in the past two years made the farmers withdraw from cultivation. Here, the government came up to collect tapioca but now it has come to a halt. The agriculture department and Horticorp collaborated to collect tapioca at Rs 12 per kg. The tapioca was dried and grated, later distributed as different products. Horticorp tried to supply dried tapioca through Supplyco kits but failed. 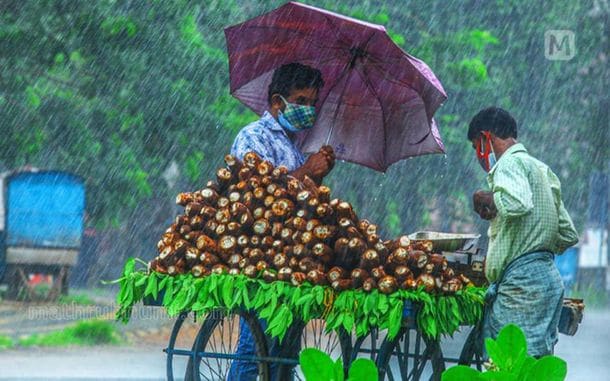 Now, tapioca is sold at Rs 35 and the high-quality ones at Rs 40. In some places in Kottayam, it was Rs 48. The lack of availability is the primary reason for the recent price hike. We didn't get enough summer since it continuously rained in different areas. It affected the tapioca tubers and their production. "People who got three tons last season barely got one ton now"- Babu Thekkeparambil, Tapioca farmer, Kottayam.

No cultivation this year due to crop loss

I am a mixed farmer and have cultivated vegetables, banana, coconut, paddy, and tapioca. The production was comparatively higher last season and wasn't entirely sold out. There was no way to convert it into value-added products. It was Rs 15 the previous season, and we can't survive without getting at least Rs 15. Moreover, the prices of fertilizers, pesticides, and ashes have significantly increased. There was no cultivation this year due to high wages and crop loss - Chandran, farmer, Kozhikode.

The business significantly declined after the price hike. It would not benefit people like us, but the farmers will be rewarded. People stopped eating tapioca after price hike, so did the production. The heavy rainfall led to massive crop loss.

Even though the production declined, we only took good quality items from the farmers. If the high-priced tapioca isn't good, it won't be sold. Even if we put a margin of Rs 5, it wouldn't benefit small-scale sellers like us. Instead of Rs 10 last year, farmers are getting Rs 30 now - Manoj, Wholesale Tapioca seller, Kottayam.

Ginger production in Kerala down even as India witnesses 8-fold increase ...

Give due recognition to farmers: Mathrubhumi agriculture fair concludes ...