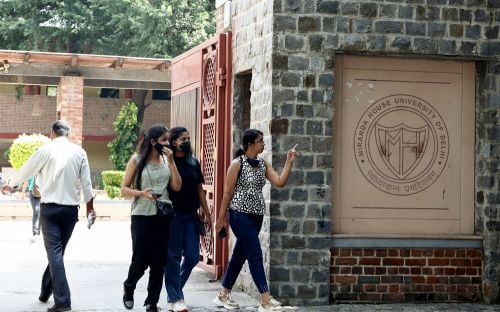 New Delhi: Women police officers in plain clothes outside colleges, anti-ragging posters across campus, vigilance squad in every college and police pickets are among the measures to be implemented in the Delhi University for maintaining discipline from the new academic session.

A meeting of the proctorial board of the University of Delhi was held on Friday to deliberate upon measures for facilitating the smooth induction of students during the opening of the new session.

Officials from the Delhi Police and senior varsity officials were present during the meeting.

Several important decisions were taken in the meeting to ensure the maintenance of discipline and prevention of ragging in the varsity and college campuses, a senior university official said.

"In this connection, the colleges and departments have been requested to strictly enforce the rules and regulations issued from time to time, especially the provisions of Ordinances XV-B, XV-C, and the Sexual Harassment of Women at Workplace (Prevention, Prohibition and Redressal) Act, 2013 (14 of 2013)," DU Registrar Vikas Gupta said.

Gupta said that all students and hostel residents as well as their parents have been asked to give an undertaking regarding anti-ragging at the time of admission.

"The anti-ragging posters in English and Hindi have been installed at the strategic locations in North and South Campuses, University of Delhi," he added.

Gupta said that the colleges, centres and hostels have been requested to restrict the entry of outsiders and to prominently display rules regarding the prohibition of ragging in their respective institutions.

"All colleges, faculties, departments and hostels have been requested to form an anti-ragging, disciplinary committee and vigilance squad taking the help of NCC/NSS students volunteers wherever possible to monitor ragging," said Gupta.

"There would be police pickets outside every college with special assistance being provided to women colleges," he noted, adding that any acts of indiscipline, ragging will be dealt with strictly under the university's statutes.

During the meeting, the police officials were requested to highlight steps for receiving ragging complaints. "Authorities were apprised of online ragging. They were suggested to report the complaint to the cyber crime wing," Gupta said.

The Delhi Police has assured that women police in plain clothes will be deployed in the university as well as outside the premises of each college.

Students must ensure that their PG is duly verified by the local police since all such accommodation facilities are regularly monitored by the area police for the proper safety and security of the student residents, Gupta said.

No non-veg food in canteen or hostel of DU's Hansraj College, students react