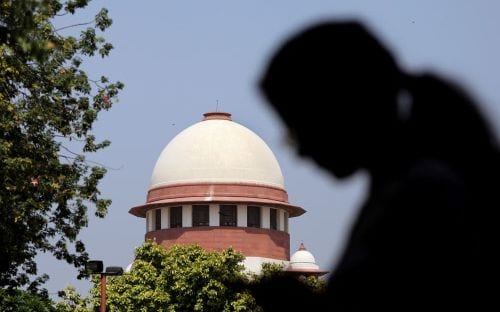 New Delhi: The Centre has submitted before Supreme Court that in consultation with National Medical Commission (NMC) it has taken pro-active measures to assist returnee students from Ukraine but added that transferring these students to colleges in India would seriously hamper the standards of medical education in the country.

The Centre apprised the SC that any further relaxation including the prayer seeking transfer of these returnee students to Medical colleges in India would hamper the standards of medical education.

In the affidavit, the Centre said the Government of India in consultation with the NMC, the apex medical education regulatory body in the Country, has taken pro-active measures to assist returnee students from Ukraine while balancing the need to maintain the requisite standard of medical education in the country.

"Any further relaxation in this regard, including the prayer seeking transfer of these returnee students to Medical colleges in India, would not only be dehors the provisions of Indian Medical Council Act 1956 and the National Medical Commission Act, 2019 as well as the regulations made thereunder but would also seriously hamper the standards of medical education in the country," Centre said in the affidavit.

The affidavit was filed by the Centre on a batch of pleas filed by Indian students who have been evacuated from Ukraine and seeking permission to continue medical study in India.

The Centre said that till now, no permission has been given by the NMC to transfer or accommodate any foreign medical students in any Indian medical institute or university.

The Centre said that the provision of the academic mobility program was permitted only for those students who are already undergoing medical education in medical universities of Ukraine and are unable to finish such education because of disruption caused by the undergoing war.

The Centres said further, the allegation that candidates with Zero marks got admission in the private medical colleges in Indiais grossly frivolous and vehemently denied. It may be noted that the common NEET exam has been conducted since 2018 and only those candidates who secure more than 50 percentile marks are eligible to take admission in Indian Medical Institutions.

It added that aggrieved students have gone to foreign countries for two reasons. Firstly, due to Poor merit in the NEET Exam. Secondly, the affordability of Medical Education in such foreign countries.

"It is humbly submitted that in case these students with (a) Poor merit are allowed admission in premier medical colleges in India by default, there may be several litigations from those desirous candidates who could not get seats in these colleges and have taken admission in either lesser known colleges or have been deprived of a seat in medical colleges. Further, in case of affordability, if these candidates are allocated Private Medical Colleges in India, they once again may not be able to afford the fees structure of the concerned institution," the Centre said.

The plea was filed by evacuated students, who have sought the urgent indulgence of this court in light of the extraordinary situation which has presented itself in the aftermath of the Russia-Ukraine war crisis which has gravely impeded their education of them. The unfortunate events in Ukraine have led to the evacuation of students and consequently, their education has inevitably come to a stand-still.

One of the petitions was filed through advocate Ashwarya Sinha, who said that the education of about 14,000 evacuated Indian students has come to a complete halt as their careers stand to be irreparably jeopardized and their fundamental rights protected under Articles 14, 19 and 21 of the Constitution of India have become illusory.

The advocate also said the evacuated students including the Petitioners herein are going through immense mental hardship and agony since their entire career hangs in ambiguity and their education has virtually come to a standstill since February 2022, with no foreseeable restoration of peace in the war-torn country.

Therefore, the petitioners have also sought to issue an appropriate direction under Section 45 of the National Medical Commission Act, 2019, upon the NMC to frame guidelines and SOPs for the migration of Indian medical students who have been evacuated from Ukraine to Indian Medical Colleges as a one time measure in the equivalent academic year.

The petition also sought to issue direction upon the Centre to issue necessary directions under Section 46 of the National Medical Commission Act, 2019; and an appropriate direction upon the respondents to provide adequate infrastructural/academic and financial support for the continuation of medical education of the evacuated Indian students from Ukraine.

The petition also sought to formulate guidelines by exercising jurisdiction conferred under Article 142 of the Constitution of India in light of the extraordinary situation on account of the ongoing war in Ukraine for protecting the interests of the evacuated students and their migration to Indian medical colleges.

In September National Medical Commission gave its "no-objection" for academic mobility program in respect of Indian medical students who are studying in Ukraine provided that other criteria of Screening Test Regulations 2002 are fulfilled.

The mobility program offered by Ukraine has been considered in the Commission in consultation with the Ministry of External Affairs, wherein it was intimated that the Academic Mobility Program is a temporary relocation to other universities in different countries globally. However, the degree will be awarded by the parent Ukrainian University.

Indians comprise 20% of all international students in the United States: ...

Transfer of returnees to Indian medical colleges would hamper education ...