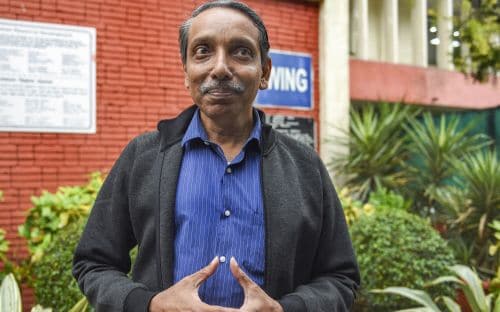 New Delhi: Facing criticism over cancellation of the common university entrance test (CUET) at some centres, UGC Chairman M Jagadesh Kumar on Sunday said it was done in the best interests of students as there were indications of "sabotage".

The National Testing Agency announced that the test which was cancelled last week will now be conducted from August 24 to 28 and fresh admit cards will be issued.

Kumar said strict action will be taken against those found involved in any "wilful sabotage" of the process.

The CUET for admission to undergraduate courses in central universities is being conducted at 489 centres in over 250 cities across India and nine cities abroad.

"There were reports and indications of sabotage in the process. NTA (National Testing Agency) immediately swung into action and cancelled and postponed examinations in centres which witnessed such a possibility. Strict action will be taken against anyone involved in wilful sabotage of the process," Kumar said.

"Cancellation of the test in some centres was done keeping the best interests of the students in mind. NTA is constantly in touch with the students through email, messaging and voice mail to keep them informed of the changes and extra care is being taken in this regard," he added.

On reports that some students were turned away from exam venues, the University Grants Commission (UGC) chairman said the staffers at certain centres should have shown more empathy with students.

"More school teachers are being deployed as they have more experience of dealing with the students with empathy. Due to the efforts and corrective actions taken by NTA, we are hopeful that in the coming days, the CUET-UG will be conducted smoothly," he said.

Several Opposition leaders, including Rahul Gandhi, have criticised authorities over glitches in the conduct of CUET.

"What is happening with the students of CUET is the story of every youth of the country today," Gandhi said.

The second phase of CUET-Undergraduate which began on Thursday was marred with glitches causing trouble to students who were sent back from exam centres.

Anticipating similar situation on Saturday, the agency cancelled the CUET-UG for the day at 53 centres and sent messages to candidates about its postponement on Friday night.

"In second phase, the exam scheduled between August 4 to 6 were deferred at a few centres due to administrative and technical reasons. Earlier, we had announced the exams would be conducted from August 12-14. NTA had also given an option to the affected candidates to choose dates other than these dates in case the schedule was not suitable to them," said Sadhana Parashar, Senior Director, NTA.

A total of "15,811 candidates requested a date different from 12 to 14 August 2022. Similarly, many candidates have approached NTA requesting not to schedule their examination between 12 to 14 August as a series of festivals are falling during this period. Also, many candidates had requested for date or city change as the cities allotted to them in Phase II (04 to 06 August 2022) were not suitable to them," she added.

The NTA official said that keeping in mind the requests, it was decided that the exam be conducted between August 24 and 28 and fresh admit cards will be issued before the examination date.

The third phase of the examination on 17, 18, and 20 August, 2022 will be conducted as per schedule informed earlier to the candidates.

"NTA has also created an exclusive grievance redressal e-mail. The grievances of candidates regarding subject combination, medium, question paper (if any) can be sent to cuetgrievance@nta.ac.in. Candidates must mention their Application Number while sending their grievance," Parashar said.

Noting that some centres failed to comply with the laid down protocols, the NTA had on Saturday warned that any incidence of non-compliance, sabotage and ignorance will be viewed very seriously and strict action will be taken against those centres to ensure smooth conduct of examinations in future.

UGC Chairman Kumar had in March announced that CUET scores will be the basis for admission to 45 central universities which can fix their minimum eligibility criteria.

With 14.9 lakh registrations, the CUET is now the second-biggest entrance exam in the country, surpassing the JEE-Main's average registration of nine lakh.