No update on JNU PhD admission; aspirants in fix 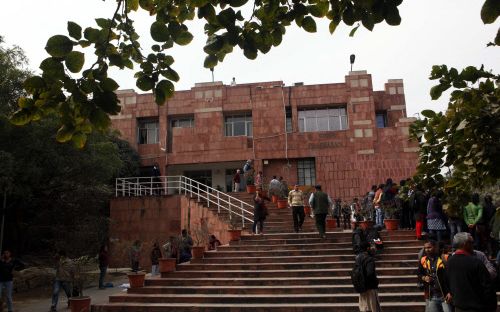 New Delhi: Anuj Tomar (27) has been checking the JNU website regularly for the last few weeks, hoping that today would be the day when the university would begin the registration process for admission to PhD programmes.

Like Tomar, confusion and anxiety have engulfed several aspirants seeking admission to PhD courses in the Jawaharlal Nehru University (JNU).

It is already October and the students still do not have any clarity as regards when the admission process will begin.

"By this time last year, the admission was done and classes had started. However, there is no update as of now. We are checking the website every day," Tomar, who wants to pursue a PhD from the School of International Studies (SIS), said.

Tomar, who hails from western Uttar Pradesh, is putting up with one of his friends here in view of the JNU entrance test for PhD admissions. He recently completed his post-graduation in French literature.

"There is anxiety among students as there has been no update from the university about the admission," Tomar said, adding that the JNU has only released a prospectus.

"Usually, within 15 days of the release of the prospectus, the admission process starts and registration begins. However, the university has not even issued any notification," he said.

The JNU recently released the PhD prospectus for the academic session 2022-23, according to which admissions will be based on merit.

The candidates seeking admission to PhD programmes have to appear in the Computer-Based Test (CBT).

Sudhanshu Pathak, who wishes to pursue a PhD in national security, said there has been no clarification from the university regarding the examination. Pathak opted for rented accommodation in Delhi a few months ago. However, the delay in the examination is forcing him to reconsider his decision to stay back in Delhi.

"I am not from Delhi. I booked a rented accommodation to that I can study for the entrance test. However, my stay here has been prolonged. There is no certainty around the admission process," he said.

Pathak believes that the classes would start in February due to the delay.

"The whole semester is wasted and even if they open registration now, the entrance exam will be held by November and the viva voce in December. The formalities would be completed in January. I am hoping that the classes would start in February," he said.

Teachers in the university have also raised concerns about the delay in the admission process.

In a statement issued on Monday, the Jawaharlal Nehru University Teachers' Association (JNUTA) said it shares the anxiety and concern of the vast majority of the faculty members over the continuing uncertainty about the admissions to the post-graduate and PhD programmes.

"There is still a near-total lack of clarity regarding the schedule of admissions and the fate of the academic calendar," it said.

The JNUTA noted that there has been no official announcement regarding the entrance examination for PhD admissions.

"JNUTA urges the JNU vice-chancellor and administration to hold an emergency Academic Council meeting as soon as possible as it believes it to be the only institutional process to resolve the issues (related to admission).

"It is crucial that the AC restores some of the significant aspects of JNU's admission process, which have been badly affected by the adoption of the 'exclusively MCQ' format that the previous JNU administration imposed on all centres and schools," the statement read.

Provisional Result for Round-2 of NEET UG 2022 Counselling released by ...