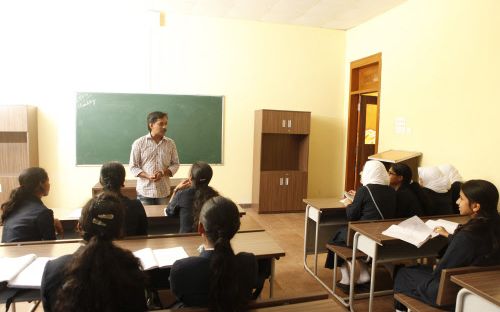 Kozhikode: School children provided interesting perspectives on the curriculum framework discussions that are underway in the state, say teachers across Kerala.

The education department has organised class-level and school-level discussions on the curriculum framework. In classroom discussions, students convey their thoughts to their teachers. At the school level, participants come from all walks of life. Schools are required to inform people, including religious leaders, about the discussion.

The curriculum framework is a broad standard that defines what students should learn. The syllabus will be updated in tune with the framework. A new Kerala Curriculum Framework (KCF) was required after the union education ministry published New Education Policy (2020) and asked the state governments to work on the policy document. The state has adhered to the 2009 framework over the years.

The State Council of Education Research and Training (SCERT) has published a PDF booklet describing 26 focus areas to aid the discussions on the KCF. There was also another booklet to facilitate discussion among children.

“Though the students’ recommendations are not restricted to the preferred focus areas of the curriculum, it is amusing how they come up with such things,” Jeeja Das, a lower-primary teacher from Kozhikode said.

Jeeja’s class-four kids wanted special coaching for competitive exams like LSS and USS, but didn't want the routine evaluations to feel competitive. A more friendly approach towards kids, including while mediating quarrels among them, is much appreciated. Library, garden, vegetable garden, separate teachers for extra-curricular activities, dedicated ground for physical activities, and comprehensive meals are part of their ‘ideal school’.

For a high school social science teacher from Kannur, his students wanted a period just to talk to each other. "I noticed widespread rejection of the content of the existing textbooks in the discussions," he commented. They prefer more practicals in science subjects, oral examinations in languages, and less social science. “I have to search for another job,” he said laughingly.

Jayalekha, a UP school teacher from Kozhikode said students questioned the life applications of the chapters in mathematics textbooks. “They are asking us what they will do with this information in real life,” she said.

Another high school teacher from Kannur who preferred to stay anonymous, said students were uncomfortable in classrooms. “During the debates on gender equality, parents and students criticised teachers. They contend we don’t have any idea about gender issues or relationships,” she stated. According to her, high school students are engaging in “college-level relationships” and things have really gotten “out of hand” post Covid lockdowns. “They need more time outside the classroom," she said. This was reflected in the discussions as well.

A common concern raised across the state was gender equality. Muslim community has taken steps to make sure that their voice is heard. Samastha Kerala Jem-iyyathul Ulama, through madrasas, sent printed notes to the students. “The notes were given to the students to submit to the schools during the discussion, after seeking permission from their parents,” said Nasar Faizy Koodathai, general secretary of Jamiyyathul Khutba of the Samastha.

Many teachers confirmed receiving the printed notes. It contained seven concerns- from the proposed time-change to school activities to probable “ban on headscarf and applying bindi on forehead.”

When asked why these were a concern when Kerala does not have any ban on headscarves or bindis, Nasar said Samastha fears that “gender equality arguments may lead to these.”

Samastha is for gender justice, not gender equality. “We recognize the need for equal opportunities and consideration for women. But gender equality is the ideology that ends up in mixed seating, unisex toilets and common playgrounds, which we don’t agree with,” he said. These are part of the printed notes submitted by students during the discussion.

A teacher from Palakkad said she refused to accept the notes given by her students. "We're told not to take outsiders' opinions into consideration during class discussions. So when students came to me with this, I asked them to write it on a paper and submit it. They did, and I have filed it,” she said.

Another teacher from the same district said the delay in releasing the focus area booklet had affected the discussions. “The parents should have received the PDF before the discussion. They came to the meeting without a proper idea of the matter,” she said.

According to a school head in Alappuzha, parents and students are unaware of what gender equality means. “They come to meetings with wrong perceptions. We clarified their misconceptions in school-level discussions,” he said.

However, a teacher from a highly Muslim-populated area in Kozhikode said their parents did not raise the gender issue at all. “My school is in an educationally backward area. Our discussions were delayed due to some issues at the school. I had already heard that gender was a cause of concern for many in other schools and I was anticipating the same here also. But to my surprise, they did not mention it. Instead, they slammed us for asking girl students to clean the classrooms while lecturing them about gender neutrality,” she said.

Nasar is also wary of the term “rational thinking” in the focus area booklet. “If they are talking about the scientific temper, we are fine with it. But that cannot lead to rationalism or anti-religious thoughts,” he said. Change in school timing is also not acceptable for Samastha since it would affect the madrasa timing, he said. Besides these, Samastha agrees with all other contents in the published document, he told mathrubhumi.com.

The teacher from Alappuzha said that the methodology of language learning was raised in their discussions. “My school has more than 100 students in class one. But only a few chose Malayalam as their medium of instruction. This is a cause for concern as students would end up neither learning English nor Malayalam when they choose English medium,” he said. Parents wanted to return to the old strategy of learning language- starting with alphabets to words and then ideas, he added.

As a result of the District Primary Education Programme (DPEP) of 1994, language learning shifted its focus to learning ideas. Kids will be taught concepts first, and eventually they will learn the language. There are critics of this approach, especially among the older generations of state school teachers and a section of linguists too.

Pramod Narath, senior lecturer with the District Institute of Education and Training (DIET), Thrissur, however, refused the argument of the Alappuzha teacher. “There are not many takers for this methodology and parents did not raise the matter at all in Thrissur. What these critics have to understand is that alphabets have never been a starting point for learning language in the modern period. Even in the 1970s when I went to school, we started off with words, not characters. Like ‘Thara, Para and Pana’. I am sorry to say this but I don’t think critics like MN Karassery have understood this. The last time one started learning Malayalam from the alphabets would be in the period of Kunjikuttan Thampuran (a poet who passed away in 1913),” he said.

However, he acknowledges that many students lack grammar and fail to form proper sentences. “That is because the learning process did not go to the next level that was supposed to cement the alphabet and other concepts. This will be addressed in the new curriculum,” Pramod said. He also said the upcoming textbooks would contain alphabets. Karassery, through an article in Mathrubhumi, had pointed out that school textbooks did not carry the Malayalam alphabet. General education minister V Sivankutty had immediately announced that it would be resolved soon.

The issue of extracurricular activities, raised by class four students of Jeeja, resonated in other parts of the state as well. “Earlier, we used to have teachers for physical education, music, work experience etc. This has been cut short. Demand for their reinstatement is rampant. A physical education teacher is a must for each school. We don’t have fancy requests like an equipped playground for each school. We know the practical issues. But at least one ground is required per local body," said the Alappuzha teacher.

School-level discussions were healthy, according to Pramod. "One major area of discussion was how to keep up with the latest developments. They need updated methodologies and relevant information in their syllabus. Not just technology. Also, career development was a concern. Tamil Nadu's position paper describes career opportunities in the field at the end of every textbook. Similar suggestions have come up here too,” he said.

Pramod described what happens after these discussions. “The report prepared by schools based on the public and classroom discussions will be sent to primary local self-governments, where the next-level of discussions will take place. Its outcome will be forwarded to the block panchayats and then districts will take it up,” he said. The data is transferred through an online portal.

Until block-level, people will discuss the entire document released by the SCERT. However, among districts, the focus areas are evenly distributed for a more specialised analysis. They will collate the data from block panchayats and hold further discussions on it.

"Thrissur has two main areas of focus- languages and vocational education. Regarding language, we hold discussions with world-renowned linguists about the global scenario in the field. We also conduct focus group discussions, meetings of selected students and teachers and separate conclaves for Arabic, Urdu, Sanskrit and other languages,” said Pramod.

Based on the reports submitted by districts, the SCERT will come up with four position papers, on school education, pre-schooling, teachers’ education and adult education.

The general public can also submit recommendations online through this portal.

Kerala govt to consider including study of laws in school curriculum

Gehlot called me 'nikamma, naakara, gaddar'; not in my upbringing to use ...