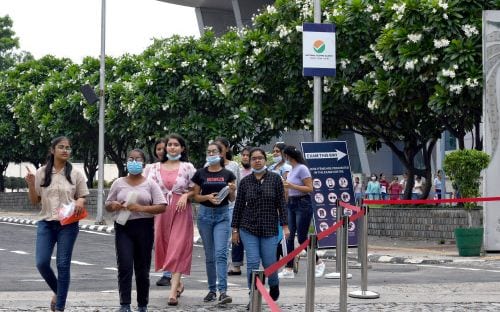 New Delhi: Technical glitches marred the second day of the Common University Entrance Test-Undergraduate (CUET-UG) on Friday, forcing the National Testing Agency (NTA) to postpone the exam at 50 centres across the country.

Some students also claimed to have received communication from the NTA late night, telling them that their exam scheduled for Saturday has been postponed due to “administrative and logistical reasons”.

Several students complained that they waited for two hours only to be informed that the exams scheduled for the day had been called off. Candidates also seemed to be in panic as the agency did not issue the admit cards for Sunday.

On second day, the exam held in the first shift was postponed at 20 centres and in the second shift at 30 centres across the country.

"Technical issues were reported at some centres, following which reports were sought from observers and city coordinators on ground. Based on their recommendations, a decision to postpone the exam was taken," a senior NTA official said.

The agency, however, did not announce any fresh dates for the reexamination.

Ganika, who wants to pursue BA (Hons) Sociology in Delhi University, said, "I came from Chhatarpur to the exam centre in Noida Sector 64 (about 34 km). We were made to sit on the terminals. At 12 pm, we were told that the exam will not be conducted today since there are technical issues. Yesterday, my sister came all the way from Narela to this centre (about 84 km) but had to return due to the same issue."

"This is height of mismanagement," she added.

Hemanshe Udar, another CUET candidate, shared a similar grievance. "I left my home in Dwarka Sector 51 (44 km) at 5.30 am to reach the centre on time. But we were told after nearly three hours that the paper won't happen today and we have to return on August 12. It is extremely difficult to commute from so far," she said.

Her mother said it was difficult for parents too as many of them took leave from work to accompany their wards.

The second phase of the CUET-UG had a bad start on Thursday as technical and administrative issues forced the NTA to cancel the second shift exam across all 489 centres and postpone the first shift at some locations in 17 states.

These exams will be conducted on August 12.

The NTA has also postponed the CUET-UG in Kerala -- scheduled for August 4, 5 and 6 -- due to heavy rains, and said fresh dates will be announced later.

Though the agency had on Thursday said the same admit card will be valid for those who could not take the exam, some students claimed on Friday that they were asked to tear them off.

Roshni, who travelled from the North Campus area, said, "I have to come to the same centre tomorrow for my Section 2 exam. We have been assured that the exam will be held. But going by yesterday's and today's scenario, it looks unlikely." Candidates whose exam is on August 7 took to social media throughout the day, tagging the NTA over admit card issues. Apart from that, there are candidates who shared their admit cards on social media, claiming that they have been allotted cities they did not opted for.

Plus one single window: First allotment out, admission open till August ...