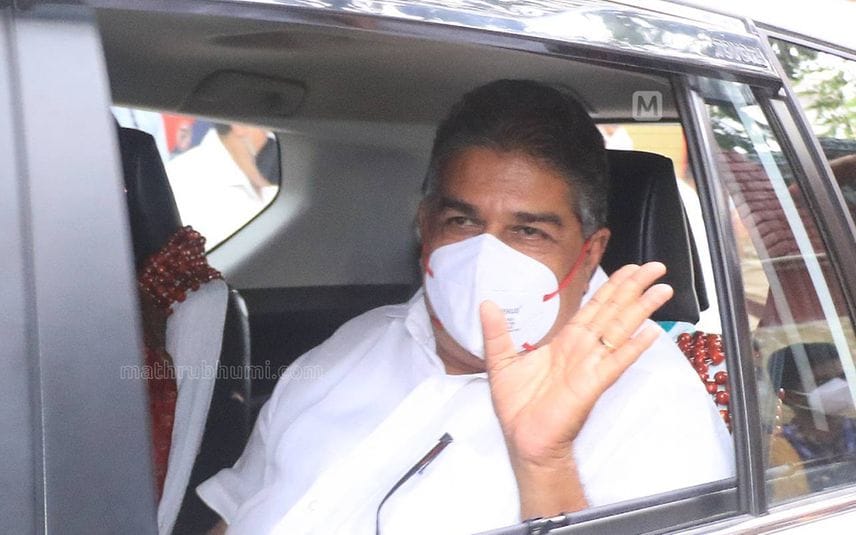 Saji Cheriyan was sleeping even after the sun broke through the curtains into his bedroom in Thengumtharayil. The previous night was too long. There was an incessant flow of comrades and others. His phone which never stopped ringing till midnight began chiming again early next morning. As one particular call showed “Unknown Number”, Saji’s wife Christina came running into his room and shook him up. Half-awake, Saji mumbled something in a voice that had turned gruff with yesterday’s continuous talking.

“Comrade Saji, I am Namboodiripad,” said a voice with that slight lisp, on the other side. It was a voice Saji was vaguely familiar with but it was none of the Namboodiripads that he knew. Realising Saji couldn't recognize him, the voice again said, “Saji, I am EMS.” Saji was fully awake by then. But he was sure some good mimic was playing a prank and he was too tired to respond. “You just woke up? Should I call sometime after, Comrade?” asked the unmistakable voice again. Saji lost his voice for a few seconds. Then he managed to mumble in utter disbelief, “Oh, comrade! How is this even possible?” The voice replied with a strange serenity, “Forget about all that, comrade. I called to tell you something important”. Though he hardly recovered from disbelief, Saji couldn’t disobey the Acharyan even though everything appeared so surreal.

EMS: Comrade, why did you make those silly comments?
Saji: Comrade, I was misquoted. It was the State and not the Constitution that I questioned.

EMS: No Saji, we get those Malayalam channels, here too. We all watched it together. AKG, Achutha Menon, Nayanar, and many other comrades from Bengal too. Even Babasaheb and Panditji too were watching from a distance as it was about the Constitution. I had the misfortune to explain to them what was happening. These channels could be horrible most of the time. But your words were clear on them. I immediately called Sitaram and asked to get your resignation without delay. I reminded him that it was only a few months ago that he spoke at the Party Congress in Kannur on the need for the Left to meet the current challenges faced by the working people, the secular democratic republic of India, and its Constitution.

EMS: No comrade. I am quite familiar with that dialect, Saji. Haven’t you heard about comrades Sankaranarayanan Thampi, KC George, PT Punnoose, MN, or TV? They were all from near your place and were my comrades from the earlier times. Even I speak in my local dialect, the Eranadan style. But how can anyone use the words you used about the constitution?

Saji: But as Marxists, shouldn’t we see even the constitution critically?

EMS: Sure Saji. But why such cuss words that only destroy its legitimacy at a time when the constitution is being rubbished by the BJP? Don’t you know that it is to the constitution that we owe the limited freedoms and rights we still enjoy? Didn’t you utter the same words of the Hindu militants like Golwalkar and Savarkar who called the constitution a British creature? Interestingly, the Congress leaders who swear by the constitution don't remember that their own predecessor K Hanumanthaiah too had lamented that he heard only the sound of an English band in the constitution and not the music from veena or sitar.

Saji: Never knew. But then, how do we criticize it comrade?

EMS: I hate to quote myself. But shall I read out from the R K Kale lecture I gave in 1968 at Poona’s Gokhale Institute? They published it as a book immediately. I think it is necessary to read it to you also because none in the party has explained our party's position in detail on the topic yet. And sadly, those who claim to be ideologues have made some embarrassingly lame excuses to justify your stupidity.

Saji: You made a lecture on the topic, comrade EM? But weren’t you the Chief Minister then?

EMS: Yes, Saji, perhaps that was why they called me. In fact, I thanked them for giving me an opportunity to explain our position because even Ambedkar had said we Communists condemned the constitution.

Saji: I am dying to hear what you said, dear comrade. I cannot forget your speeches I used to listen to since my school days. I had just joined SFI when you came to Chengannur to speak at a public meeting just after the lifting of the Emergency.

EMS: Very well. I was also impressed from here when I saw Ramachandran Nair and you capture Chengannur from the right-wing, although it was originally won by my dear comrades Sankaranarayanan Thampi and later by PG Purushothaman Pillai. Anyway, here you go. I am reading now. “We are proud of our Republican Constitution. We consider its adoption by the Constituent Assembly to be a memorable event in the history of our country. That event put an end to the decades of foreign domination as well as several centuries of caste-ridden, conservative socio-cultural set-up; it inscribed on our banner the inspiring slogans of political liberty, parliamentary democracy, an end to all forms of social inequality, and guarantee of all-round progress.

Saji: Oh, none told me until now about this.

EMS: It is published in Malayalam too, comrade.

Saji: But then comrade, isn’t it right that the constitution has not accepted the right to strike as a fundamental right?

EMS: Comrade, who said it was a perfect constitution? Do you know that Ambedkar himself said the constitution was neither infallible nor final? He even said that it consisted of only the views of a particular generation which should not be binding to the next, quoting Jefferson. Especially Marxists like us who don’t believe in constitutionalism should keep pointing them out. But when you rubbish it so badly, all other rights including those of the working class granted by the constitution go out of the window. Do you want to hear what I said in that lecture about the constitution’s contribution to the working class?

EMS: Sad, these things are not taught in the party now. I don’t know how many classes I took on this topic in my life. Anyway, here is what I said; We look upon the framing of the Constitution as a historical landmark in the sense that it has given the working people and their political representatives, new opportunities for organizing themselves and perfecting their weapons of the struggle for a new socialist system. The victories gained by them by way of not only reducing the Congress strength in the country as a whole but also forming non-Congress Governments on occasions in a few States are a guarantee that the defense of the Parliamentary system is in the interests of the working people.

Saji: I understand comrade. But bear with me comrade, so you have nothing critical to say?

EMS: No, dear Saji. But not in the way you said. Most of the lecture contains my critique of the constitution and also 21 suggestions on how to make it better for the radical transformation of our society as promised in the constitution itself. Will you please read it in full? Please read my lecture in full. It's only 20 pages. Or is reading too dead in the party forever? And have you heard of Comrade Somnath Lahiri? He was our party’s top leader and also one of the makers of the constitution. Read about him too.

EMS: Before I hang up, let me compliment you on one thing. Your ugly remarks have reminded us once again about the importance of the constitution. As Churchill said, it turned out to be a good crisis that didn’t go totally to waste! I and Panditji laughed a lot watching on channels the Congress and BJP leaders and also those top lawyers crying so hoarse for the constitution. Just four years ago, they were rubbishing the Supreme Court verdict on Sabarimala which upheld the Constitutional morality over religious rituals.

EMS: Can I give one more piece of advice, Saji? Don’t keep justifying yourself. Try saying sorry. It will do you only good.

Saji: The opposition is pestering me to quit as MLA too

EMS: That I'm leaving to your conscience.

Saji then got up from bed and walked out to take his TVS Scooty to fetch a copy of EMS’s book. Precisely at that moment, Saji woke up from his sleep. It was almost noon by then.