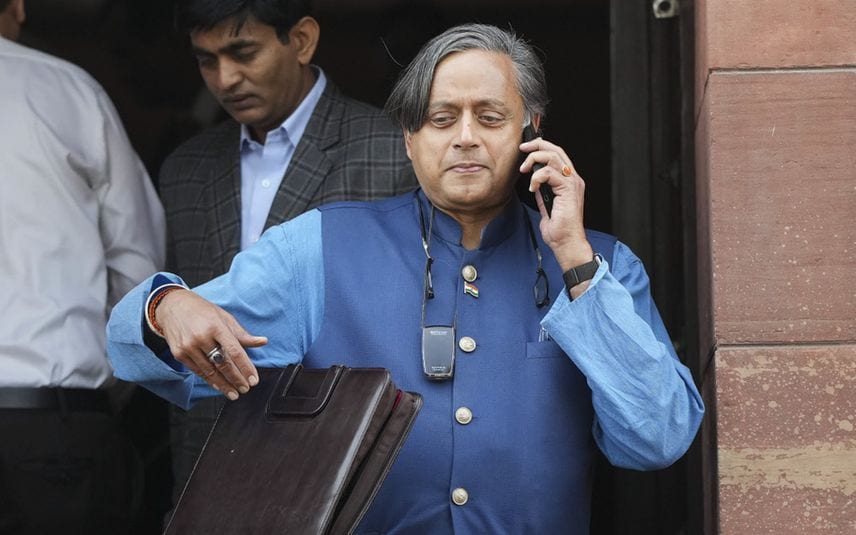 I confess I was among those who profusely encouraged my dear friend Shashi Tharoor to enter politics. I was also in the first small group he called on a starry night 14 years ago at the Skybar of the Leela, Kovalam overlooking the Arabian sea, to discuss his political entry. Diplomat and author T P Sreenivasan, the other participant in that meeting, later narrated in his fascinating book, Mattering To India, how surprised he was to see me at that meeting knowing I was from a staunch Left family!

I used to follow Tharoor's column in Debanoir from my college days and felt proud that he was a Malayali and that he had achieved so much even at a young age. (I admit feeling slightly jealous also, as he was only two years older than me). I was also quite impressed by his excellent books like the Great Indian Novel and Riot and I agreed with most of what he wrote. His admiration for secularism, pluralism and human rights, his abhorrence of authoritarianism, family rule, jingoism, communalism, casteism, support for the environment and gender justice. Hence, I sincerely believed his entry would raise the bar of India’s and Kerala’s political discourse. I was sure, as an MP, he would be very good for Thiruvananthapuram, which never received its deserving attention from the political class or those who represented it in the legislatures or parliament, irrespective of their parties.

No doubt, Tharoor was in for an unexpected predicament in his political journey in Kerala. It was much more complex than what he faced in the contest he lost in the United Nations as Secretary General. On one side, his famed intellectual and diplomatic credentials certainly helped him claim the mantle of Malayali’s first Viswa Pouran, VK Krishna Menon. His “Sayipp” English and film star good looks that the Malayali middle class adored and felt proud of was a bonus. But on the other, Tharoor’s political journey has not been smooth right from its start. His hurdles included the envious party colleagues who tried every trick in the trade to sabotage his candidature; he was branded an upper-class Burra saheb who had never faced the hardships of political life; he had no base among the masses; he had no pronounced communal or caste identity (remember the “Delhi Nair”); the polyglot couldn’t speak his own mother tongue.

After winning against heavy odds and becoming a Central minister (only a junior ministership), a veritable minefield opened before him. His every step triggered explosive controversies. The hasty comments of him and his staff members (“cattle class”) and his stay in a Five Star hotel kicked up much rest. Soon the ugly IPL scam cost him his ministership as he stepped down barely one year after. Months before the 2014 Lok Sabha elections came the worst; his wife’s untimely death. Few politicians anywhere in the world would survive the allegations that rose against him as a wife-slayer, amplified by the national media. Kerala’s Congress party attempted to deny him tickets saying he would lose on account of the charges against him. But thanks to Sonia Gandhi, Tharoor was fielded again. Despite a vicious campaign against him, Tharoor won again, albeit with a lesser margin than in 2009.

Five years later, Tharoor dashed BJP’s hopes again in Thiruvananthapuram, defeating Kummanam Rajasekharan by nearly 1 lakh votes even when the Modi wave was sweeping India. Today, undoubtedly, no party has a candidate to match Tharoor in Thiruvananthapuram, a seat known for long for its fickle-mindedness. He has massive appeal cutting across all divides. Like the brilliant student that he was, Tharoor has also worked so well to improve his Malayalam considerably. As a wag said, Prakash Karat, though he was born and brought up outside, has been in regular touch with Kerala all his life. Yet, the Marxist doesn’t dare to utter a Malayalam word in public, while Tharoor never lets go of a chance. The professional communicator that he is, Tharoor’s lack of hubris or ego and the way he treats everyone he meets equally have been exceptional. While following him in his first campaign trail I was astonished at the way he negotiated through the dusty and sweaty Thiruvananthapuram, a far cry from the high profile international fora he was used to until then.

The three-time MP also deserves full credit for his incredibly prolific and masterly writing, which has not been even slightly affected by his busy politics. Even when he was passing through difficult personal and political situations, Tharoor has held the Indian flag aloft by making brilliant speeches and interventions at global fora for the Indian cause.

So, indeed, Tharoor has proved a formidable political player. But has India or Kerala gained anything on its account? I have not found Tharoor doing anything remarkable, even after three terms as a Lok Sabha member. Neither was he able to raise India’s or Kerala’s political discourse, nor has he done anything different from those who represented Thiruvananthapuram before for his constituency. Granted, it may be impossible to do anything substantially for an individual or even an MP by skirting around a rusted political and bureaucratic establishment. Granted also, that his political opponents also aborted some of his projects. Yet, did he do anything he could have done, given his international experience, intellect, ideas, and global connections?

Despite all my misgivings mentioned above, I would still have voted for him again in 2024 (that is, if he again contests for Lok Sabha instead of his wish to be the CM) because I don't expect to find a better option. But now I may have to think twice. For, even when I can excuse him for failing to raise the bar of Kerala’s political, social, and ethical discourse, I cannot forgive him for kicking it downwards! How can a cosmopolitan and enlightened intellectual who swears by secular and progressive ideals and values be cringing before the most conservative communal and caste lobbies? It is one thing not to oppose these communal overlords (like in the Sabarimala issue) but to pay obeisance to them is taking Kerala backward. That too when the state appears to have fallen behind its renaissance project making way for the narrow communal, caste, and patriarchal interests to wriggle back to the centre, with even the so-called progressive Left appearing in awe of them. If Tharoor expects these vested interests, which have imprisoned Kerala and its political parties in a suffocating quagmire, to back him, how on earth can he even imagine building a new Kerala, as he promises? The forces Tharoor is trying to sup with are those who dare even publicly to rubbish matters like even gender equality, not just enshrined in the constitution but a core value for any modern society. It is unbelievable that Tharoor believes these caste lords command their communities' vote banks, a myth proved miserably wrong, election after election. Most voters look for a candidate’s caste and religious identities only when the other option hardly inspires confidence. Malayalis, too are no exception.

Now, Congress leaders, stupid as they are, keep baying for Tharoor’s blood even when he is their only positively winnable candidate for 2024. Like the High Command (read the family) nominated Mallikarjun Kharge as AICC Chief instead of Tharoor, their State Command too would come out with some brilliant alternative to him and get trounced in Thiruvananthapuram. Hope, they don’t at least drive Tharoor off to the Hindutva camp.

In fact, the only chance for Tharoor to see his expressed wish to be Kerala Chief Minister to come true is to give up his appeasement of the vested interests and come out with a credible master plan for Kerala’s future. Wonder why Tharoor, whose greatest strengths are vision, ideas, and words, hasn't yet presented his dream for Kerala before announcing his legitimate desire to lead their state?

Tried, tested tired of all political formations, Kerala is waiting for a leader with vision, integrity, and capability to perform. Someone who refuses to bow before vested interests. With a mass appeal and goodwill cutting across all divides, Tharoor could easily be Kerala’s Arvind Kejriwal, with or without any political party’s support. Every party and the caste lords he fears now would come to him. He has nothing to lose but his self-defeating penchant for compromises and quick fixes.