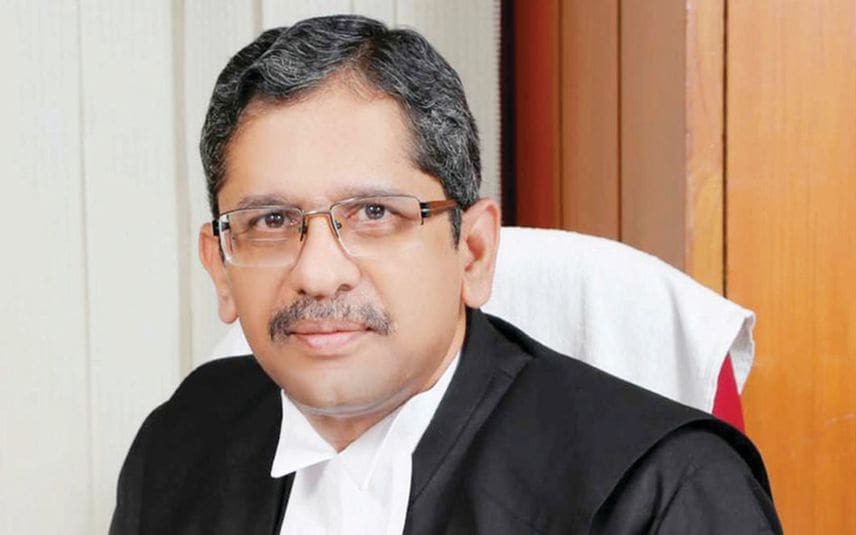 Nuthalpati Venkat Ramana has ensured himself a hallowed place in history as one of India’s greatest Chief Justices with just one stroke. He has put in the freezer one of the country’s blackest laws that has been in force for 150 years, which none dared to touch. Hopefully, Justice Ramana’s historic step would trigger the due process by a reluctant central government to bury forever this notorious “sedition law” -Section 124 A of the Indian Penal Code- although it may not happen before his term ends in August. The apex court's order has come as a great consolation after India’s slipping to its worst-ever rank -150- in the Freedom of Press Index just a week ago.

Ramana's was not a sudden decision but driven by his firm conviction and commitment to the civil liberties enshrined in our constitution. A few days after he assumed office as the 48th Chief Justice of India (CJI) on 23 April 2021, Ramana remarked while hearing pleas filed by the Editors Guild of India, “Sedition is a colonial law. It suppresses freedoms. It was used against Mahatma Gandhi, Tilak…Is this law necessary after 75 years of independence?”

The sword Ramana has driven into this black law’s heart is only the latest among the various decisions he initiated since taking over. Judgments and orders that virtually restored the prestige and independence of the Indian judiciary, which lost its credibility considerably since 2014. And that too when the present central government has emerged as the mightiest of the past three decades and the Supreme court, in its weakest state of capitulation.

Thanks perhaps to his background as a student activist who opposed the Emergency (and lost an academic year in the process) and later briefly as a journalist, the 65-year-old Ramana has shown exceptional courage and conviction to hold the cause of democracy and civil liberties aloft during the past one year at the helm of Indian judiciary. Born to a humble farmer family in Ponnavaram village in Krishna district, Andhra Pradesh, Ramana has shown empathy towards the poor and the cause of democracy throughout his career.

The signs of change were evident right from the beginning. According to one observer, the series of decisions taken within a week since Justice Ramana took over marked a paradigm shift and rejuvenation within the apex court. Among his earliest steps were the directive to the reluctant Uttar Pradesh government to shift Siddique Kappen, the Malayali journalist locked under UAPA, to Delhi for treatment; sniping at the central government for its lapses in managing the second Covid wave; rejecting Election Commission’s demand to stop the media from covering judges’ oral remarks in court, etc. His path-breaking judgements subsequently included making access to the Internet part of the fundamental rights; cautioning against restrictions on journalists in Jammu & Kashmir; endorsing the rights of even the UAPA accused (KA Najeeb) to constitutional liberties; admonishing the central government for hiding vital information by raising the bogey of national security in the Pegasus case.

Ramana enters history also by presiding over a Supreme Court with no pending judicial vacancies. In one stroke, his decision to appoint nine judges, including three women and 126 judges in the high courts, was unprecedented. The way Ramana ensured the apex court’s smooth functioning during Covid time with the help of technology too was praiseworthy.

India has had an array of great judges who resolutely held civil liberties and democracy aloft during their illustrious careers. What makes Ramana unique is how he almost single-handedly salvaged the Indian judiciary from the rot it fell into in recent times. High credit is due to him for standing up unflinchingly to a state showing signs of growing into a leviathan.

During the post-1990s decades, the Indian Supreme Court was seen as the “world’s most powerful court,” roaring as a crusader. It had played brave innings of “judicial activism,” encouraged public interest litigation, and scorched the central government on various corruption cases. But since 2014, the roar has turned meow. Observers lamented that in case after case, the apex court had readily assumed a subservient role to the state since 2014. Examples abound like cases related to Sahara-Birla, Justice Loya, Bhima-Koregaon, Rafale, Aadhar, etc in all of which it played second fiddle to the government.

The central government blatantly undermined the Supreme court’s authority in appointing judges exercised through the collegium system. Collegium’s recommendations were brazenly overlooked. Besides commissions, the apex court’s acts of omission too were equally unprecedented. It refused even to list complaints that challenged various controversial decisions by the government like the change in Jammu & Kashmir’s constitutional status, Demonetization, Citizenship Amendment Act, electoral bonds, or reservations. Judicial activism gave way to “judicial evasion”, as one commented. The apex court’s evasion was evident in cases related to the shocking arrests of venerable veteran intellectuals in the Bhima Koregaon case or in the case related to Malayali journalist Siddique Kappen’s case.

Senior judges, including CJIs, had no qualms showering praise on Prime Minister Modi. Justice Arun Mishra, the third senior-most judge of the Supreme court, set a new benchmark while inaugurating an international judicial conference in 2020 by describing Modi as an “international visionary and a versatile genius.” Another Supreme Court judge M.R.Shah referred to Modi as a “model and hero”. This gushing reminded of a similar frothing that occurred in 1980 from another Judge P.N.Bhagwati who later became the CJI. He wrote a congratulatory letter to Indira Gandhi for her electoral victory and called her the “symbol of the hopes and aspirations of the poor”. Justice Bhagavati was part of the highly arbitrary verdict in the “Habeas Corpus case” -ADM Jabalpur case- which took away a basic fundamental right. However, he openly regretted it thirty years later, agreeing to Justice HR Khanna’s famous dissent in the case.

The most dramatic and embarrassing spectacle in India’s judicial history occurred when four senior serving judges of the Supreme court held a press conference in 2018 accusing Chief Justice Deepak Mishra of judicial misconduct like bench fixing etc. Subsequently, one of those judges - Ranjan Gogoi - became CJI and faced various misconduct charges, including a sex case! Some of his controversial judgements like the grant of the disputed Ayodhya site to Hindus and the review of the Sabarimala verdict etc., pleased the ruling party no end. Justice Gogoi walked into the Rajyasabha as a member by the President of India, barely four months after his retirement.

Justice Gogoi was succeeded by Justice Sharad A Bobde as the new CJI and had his share of controversies. His refusal to direct the central government to provide assistance to the migrant workers during the Covid days and the dismissal of the Habeas Corpus petition (Article 32) for Kappen, who was arrested while traveling to Hathras to cover the gang rape of a Dalit girl, triggered shock. Even as he dismissed Kappen’s petition, saying the court wanted to discourage petitions under Article 32, Justice Bobde was eager to grant bail to another journalist -Arnab Goswami- on a similar plea. When this discrimination was pointed out, Justice said, “both the cases were different”. Obviously. A writer lamented, “One of the most conspicuous casualties of the ongoing crisis of constitutional democracy is the complete capitulation of the Supreme court to the majoritarian rule.”

It is these murky clouds that were blown away by Ramana. In fact, vested interests were terrified when Ramana was about to assume the highest seat in the Indian judiciary. Andhra Pradesh’s Chief Minister Jagan Mohan Reddy wrote a letter in October 2020 complaining that Ramana was too close to former Chief Minister Chandrababu Naidu and was interfering in cases in Andhra’s courts related to Naidu’s alleged involvement in certain land scams. Reddy also alluded to Ramana’s daughters’ alleged involvement in some deals. However, an internal inquiry by the apex court exonerated Ramana paving the way for his appointment. It is said that Reddy was provoked by Ramana’s decision to expedite cases against MLAs and MPs. Even while he was a judge in the Andhra High Court in 2013, a complaint was filed by two senior advocates against Ramana. According to their petition, Ramana was a proclaimed criminal offender in a case of rioting and destruction of public property by fire in 1981 when he was a student at Nagarjuna University. The Supreme court dismissed this complaint with a cost of Rs 50,000 imposed on the petitioners.

When Justice Ramana retires on the 26th of this August, he will have the longest term - 16 months - as CJI in the last decade, which saw 11 CJIs. Indeed, it would also be one of the brightest and blemishless in India’s judicial history. Hope, his successors will follow his steps to protect the idea of India.