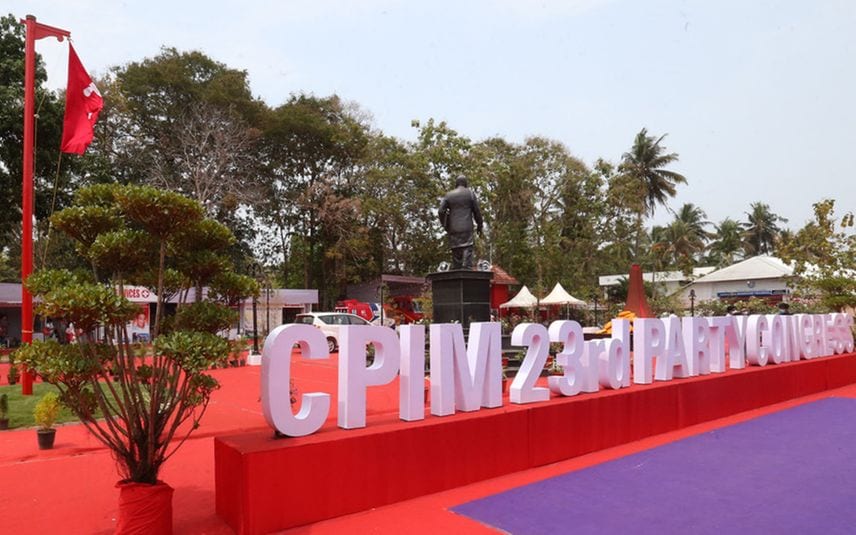 Elephant to the ant: I love you. Will you marry me?

Its a famed elephant and ant (E/A) joke. KPCC Chief K Sudhakaran pooh-poohed the 23rd CPI-M Party Congress decision not to ally with Congress, comparing it to an ant proposing to an elephant. Don’t know if Sudhakaran knew that E/A jokes are universal. In Hindi, they call them haathi aur chiti jokes. Certainly, Sudhakaran might not have known that from Panchatantra onwards, most E/A stories are about how the tiny ant trumps the haughty elephant. My favourite E/A line; every elephant has an ant on its tail. (eleph-ant). Another one is the query, which is the largest ant and the reply, elephant. They may also remind us of the hackneyed BJP barb; what's there to choose between the two “sickular” parties? Come to think of it, there could be a collection of Congress-CPI-M jokes too. Here's my first one. Even when it hates Congress, the CPI-M needs a congress every three years. Next, the only difference between the two parties is that when one believes in the Congress party, the other swears by the Party Congress.

Sorry for the laboured jokes. But sadly, CPI-M's latest party congress at Kannur has not much to write about. Even when the Indian Left is gasping for breath, struggling on its weakest wicket since independence, and the BJP is driving country to a precipice, CPI-M's 23rd Congress has brought nothing new to the table. Same old rhetoric and vacuous proclamations. The primary debate was on something it has been debating from the 1950s - to ally or not with the Congress party. The issue had some gravitas during those days when the Congress party was a mammoth striding across the country. Today it is on its weakest legs in its 137 years' history, having been reduced to rule just two states. The Congress's fall has been far more dramatic than the CPI-M, which never had power in more than three states. What possible impact could these two hemorrhaging parties bring on the present Indian polity? Moreover, their recent mutual alliance in Bengal has already been proved barren.

The next major debate was on yet another ancient issue - how to expand the Left's influence to other states. The change now is that even as the CPI-M continues to fail on this count, it has also lost two states that it had kept for long. The only consolation is it's retaining Kerala for the first time back to back, thanks to the pandemic. Common sense is the grain of every proverb. A bird in hand is worth two in the bush. Unless it is strong on its home turf, no party will enjoy clout in any national alliance. Remember the Left's immense bargaining power on the first United Progressive Alliance government of 2004 when it could directly influence key policy decisions. It was only on account of the Left's highest ever tally of 60 seats, of which more than half came from West Bengal. Hence, unless Bengal, with its total 42 Lok Sabha seats, is recaptured, the Left will never have any major role in Indian politics. Therefore, though the crisis is humongous, the solution is pretty simple - get Bengal back. But there is no sign of a comeback or even an attempt for one there. The interviews given by Bengal's Biman Bose and Tripura's Manik Sarkar at Kannur show they have neither any plan to get out of the deep abyss nor an honest introspection on their decimation. All that they do is lament how Trinamool and BJP machinery bash up their cadres. In Kerala, too, even when it wins in the assembly, CPI-M doesn't usually cross the halfway mark in Lok Sabha. Given the government's stubbornness and the snowballing protests on SilverLine, what waits for the CPI-M at the next hustings is anybody's guess.

Even as the CPI-M's pro-Congress Bengal group and anti-Congress Kerala group grapple over the issue, they ignore what has emerged as a real alternative to the BJP, the Aam Aadmi party (AAP). In fact, the barely 10-year-old AAP has been calling the bluff of the BJP's seeming invincibility for the past nine years repeatedly at a time when the saffron party appears to have entered its strongest phase in history! Just two years after its birth, AAP, with its unknown and unheard of candidates, trounced BJP and Congress, which had dominated Delhi since independence. It grabbed 67 of the 70 assembly seats leaving just 3 for the BJP and none for Congress. Mind you, the election was held just a year after Narendra Modi was swept to power on a huge saffron wave. And that too in the country's capital right under the nose of the BJP juggernaut. Though Delhi voted for the BJP again in the 2019 Lok Sabha elections, the state endorsed Kejriwal as the best option to govern the state by overwhelmingly voting for AAP again in the 2020 assembly polls. Can voters be more discerning! Two more years later, today, AAP has gone national by acquiring Punjab. Again AAP's mobile phone mechanics and other Davids trounced the Goliaths of Congress and BJP.

AAP shows how silly it is to think that the Indian voter is totally slavish to communal or caste politics today. Yet, it's also right that the voter could vote on communal or casteist lines unless there is a credible alternative. But AAP proves that if there is a reasonable alternative who could deliver good governance, the Indian voter doesn't care about religion, caste or leadership. So much for the seemingly unbeatable identity politics. Why not the Communist parties and the Congress, which stand clueless before BJP's majoritarian machine, try to learn? Especially when AAP's winning performance has been based mainly on what they have done for the constituency, which the Left and the old Congress used to swear by- the common people. AAP's record in improving the government schools and mohalla clinics, free electricity and water supply, etc. form the core of the AAP model. But it appears the Left can't care less.

The Left-liberal charges about Kejriwal's soft Hindutva and unwillingness to back minorities etc, are not entirely baseless. But when the traditional political discourse on secularism and communalism doesn’t enjoy the old currency in present-day India, where values have undergone a paradigm shift, Kejriwal's refusal to be dragged into the BJP agenda is clever politics. It also appears to have paid off too. The new Common sense has to be fought on a different plain.