Kerala Sports : Where have our women gone?

No female athlete from Kerala went to the Tokyo Olympics. The G V Raja Sports schools which produced stars like P T Usha have been languishing of late. 'We need less politics in sports and more sports in politics'

Kizhakkambalam refuses to leave the headlines. Years ago, Rajan Paul, a brilliant mechanical engineer, paralysed from neck downwards, demonstrated amazing will to create an innovative enterprise here that ensured livelihood to more than 6000 local people. The village in Ernakulam district later grabbed global attention as India's 'first corporate panchayat' when it handed over administration to Twenty20, an outfit launched by a private firm rejecting all political parties. Next was when Sabu Jacob, the architect of this unique political experiment and also the village's most successful businessman, cried hoarse about official harassment and threatened to leave Kerala. Today, Kizhakkambalam hogs attention for a much happier reason. Its most famous sportsperson, Paratt Raveendran Sreejesh, has brought not just the village and state but the entire nation glory by authoring the Indian hockey team's first Olympic medal after four decades. Certainly, the plantation-filled village appears fertile for talent, will, and experimentation. 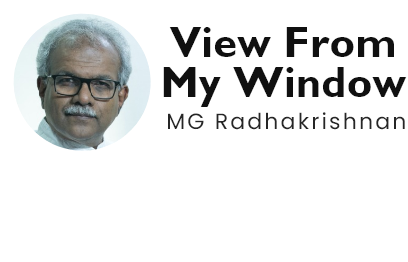 Kizhakkambalam and Kerala can certainly be proud. Yet, except for Sreejesh's glory, is there anything more for Kerala to be proud about Tokyo Olympics? Not much. In fact, Tokyo Olympics has gone into history as the first games held in 40 years to have no women from Kerala who dominated Indian athletics from the 1980s.

None of Kerala's three women-relay runners Jisna Mathew, Vismaya and middle distance runner PU Chitra-who were shortlisted for Tokyo could clear trials while four had made it to the last games at Rio. The prime reason could be fitness issues and pandemic restrictions. Training and travel were severely hampered with stadiums and gyms remaining closed and competitions called off. Even a simple protocol like the face masks throttled training and workouts. However, this did not prevent a record number of nine Kerala men being qualified for Tokyo for the first time in a role reversal of sorts although none of them work or practice in the state. Thanks to entrenched social inequities that deny a level playing field, women always find it harder than men to overcome hurdles and run the extra mile even to reach the same goal.

But is the pandemic the only reason for Kerala's seemingly vanishing glory in the sports arena? Kerala has produced a high number of Olympians -about 50 of which 19 were women. Kerala's presence was significant in the continent's highest competition - Asian Games- too ever since TC Yohannan won a Gold for Long Jump and Suresh Babu, a bronze for Decathlon at Teheran, 1974. The Asian Games have since witnessed a dramatic rise of Kerala women like Angel Mary Joseph, MD Valsamma, PT Usha, Mercy Kuttan, Shiny Wilson, Anju Bobby George, KM Beenamol, Bobby Aloysius. These women's achievements even overshadowed the performances of their male compatriots like Murali Kuttan or Premachandran. Kerala's trail of glory in Asian Games peaked in 2002 at Busan when it won as many as 6 individual medals for India on all track events including sprint, jump and throw. Golds were bagged by Anju Bobby George (Long Jump) and KM Beenamol (800M), silvers by Bobby Aloysius (high Jump), Beenamol (400M) and her brother KM Binu (800M) -first time in history when siblings won medals at the same venue. Beenamol became Busan's diva when besides individual gold and silver medals she also pivoted the Indian quartet's gold run in 4x400 which included Kerala's Jincy Philip too. The state's women athletes' achievements were in line with the famed Kerala Model of Development-high performance in human development indices including women's progress even while remaining economically backward. Kerala was one of India's poorest states in the 1980s and 90s and these girls from very poor backgrounds had competed and won against countries far richer like Japan, China or the 'Asian Tigers' like Taiwan, South Korea, Hong Kong and Singapore.

But 2002 had marked a watershed. Since then Kerala athletes began losing steam. Ironically, it was the time when Kerala began rising in the economic ladder! The following one and a half decade turned almost a 'dark age' for Kerala when it had to contend with just two Gold medals from 3 editions of Asian Games. The only two gold winners were Preeja Sreedharan in 10,000M and Joseph Abraham in 400M Hurdles at Guangzhou in 2010. Preeja showed signs of her predecessors when she lapped up a silver too in 5000M. Three years earlier to it at Osaka, the Kottayam-born Abraham had become the first Indian male to reach the semi final at a World Athletics Championship. After this it took another 8 more years for Kerala to find a gold winner - Jinson Johnson- at Asiad.

The story was even worse for Kerala women. If it took 8 years for Preeja to win a Gold after Anju and Beenamol, it has been a long winter since. After Preeja in 2010, no Kerala woman has won an individual gold at Asian Games till date though there have been laurels at lesser meets. All the next generation stars - Sinimol, Tintu Luka or OP Jaisha- had to contend with either silver or bronze although some had figured in the gold-winning quartets in all the three Asian Games held until 2018. The period witnessed Kerala vacating its pre-eminent position in athletics to states like Haryana, Punjab and Tamil Nadu.

Certainly 2018 marked a turnaround for Kerala sports after a 'lost decade'. Kerala athletes made an impressive nine medal haul including two Golds- one for individual and one for a team event. Jinson won Gold in 1500M and Silver in 800M to emerge the Indian star. Mohammed Anas excelled to win Silver in 400 M besides being in the Mixed Relay quartet that struck gold and also the Men's 4x400 team that secured silver. Kerala's Kunhumuhammed and Jithu Baby were also in the silver winning quartet. Although VK Vismaya was in the quartet that won gold in 4x400M, Kerala women's tale of woe was not over in individual events. They were left with V.Neena's silver for Long Jump and a bronze by PU Chitra in 1500 M.

The national media celebrated Kerala's performance at Jakarta as the likely return to the gold run after her 'bronze age'. But in the final medal tally Kerala fell behind Haryana (18) and Tamil Nadu (12). Even while praising the comeback, many observers noted that 'but for Jinson who was already 27, no Kerala athlete could be talked in the same breath as a Neeraj Chopra or a Hima Das'. At Jakarta, the Kozhikode-born Jinson (3:44.72) had even bettered the Rio Olympic Gold winner's -Mathew Centrowitz of USA- record (3:50.00)! According to Anju Bobby George the reason for Kerala stars' impressive show was the excellent coaching by the 72 year-old Soviet era athlete Galina Bukharina organised by Athletic Federation of India. She coached Assam's Hima Das to become the first Indian sprinter to win gold (400M) at the Junior World Championships in 2018. Kerala's Anas too was coached by her when he became the second Indian after Milkha Singh in 2018 to enter a sprint final at Commonwealth Games.

So, 2018 was only a consolation prize for Kerala. Unless the state launches immediate and comprehensive fire fighting, the state's sporting sunset looks imminent. Both the government and also the society -includes you and me- have to sit up and take note. Perhaps on account of the state's recent remittances-driven prosperity, the intense hunger to find livelihood through sports -which had driven many legends- appears dimmed in Kerala as shown in the falling participation at grass root level competitions. The increasing 'middle-classisation' of Kerala society has also made families to privilege studies over sports as they hanker for professional education at any cost! Many also cite the falling population growth which makes nuclear families force kids to put all their energy on studies. Unlike the more conservative Hindus and Muslims, Christian community and the Church had once encouraged girls to be nurses, nuns or sportspersons and they made a mark globally. Today all these fields face falling numbers.

The state government too has to do a lot more. It has to find a good match marrying our traditional strengths with global expertise. It has to formulate with global professional help, a much comprehensive policy -last government had formed a new policy-to suit the way international sports have changed radically in recent times. Merely getting top in national events would only preserve mediocrity which would get easily exposed in international competitions. Kerala has done better than the rest of India in many fields including sports and hence it has to think globally to be on top. We have to get the services of international coaches and facilities as modern sports is now a high-tech and expensive enterprise in which natural talent could be only one of the pre-requisites. Great practitioners need not be great coaches who need a completely different skill set as proved by the septuagenarian Bukharina. It may also learn from the Odisha government which is credited most for the Indian hockey teams' performance at Tokyo. The sports-loving Chief Minister Naveen Patnaik has been leading the massive movement to support Indian hockey through a spate of measures including sponsoring the national teams, holding a World Cup, setting up a multitude of Astroturfs across Odisha. Today Sundargarh district alone boasts of four members in the Olympic team besides the former national captain Dilip Tirkey. In order to ensure quality and save expenses, Kerala too needs to focus only on disciplines in which it has proven competency.

Patnaik is ably backed by corporates like the Tatas. Will our own Byju's or Muthoot Group which are already national sport sponsors or LuLu or Kitex step in? Kerala's sports revolution was kindled with the opening of GV Raja Sports schools in the 1970s recommended by a committee headed by Justice VR Krishna Iyer. Most of our stars from Usha onwards were products of these schools. But how many stars are produced today by these schools? Iyer in his characteristic flourish noted in his brilliant report; 'We need less politics in sports and more sports in politics'. Amen.