A chill went down my spine, a few days ago, while reading about the tragic death of Havildar Mohammed Saijal of Parappanangadi and six other Indian Army soldiers when the bus carrying them skidded down the Shyok river, 60 feet below in Leh, Ladakh. For, we were also travelling barely a week earlier through the same snowy and rocky mountain pass. Like so many other families comprising very old persons and little children too, we were on our dream adventure, unmindful of the risks, travelling through Khardung La, one of the world’s highest motorable roads, at 17852 feet. Though the present road was built only in 1976, Khardung La lies on the ancient caravan route from Leh to Kashgar in Central Asia. Thousands of camels and horses had regularly carried silk, spices, wool, pearls, and opium by this route. It was a fantastic feeling to travel through the road replete with such a hoary history.

But, often our excitement was overtaken by sheer fear. Nizar, our young but seasoned driver from Kargil, was skillfully negotiating the high and narrow winding track with the scary, deep abyss on the one side. Yet we skipped a beat or two on many occasions. Like when our Crysta skidded a foot or more towards the precipice when Nizar slammed on the brakes to make way for a vehicle that suddenly appeared from behind a protruding boulder. Or when we sneaked a glance to see the Indus or Shyok, meandering thousands of feet below. 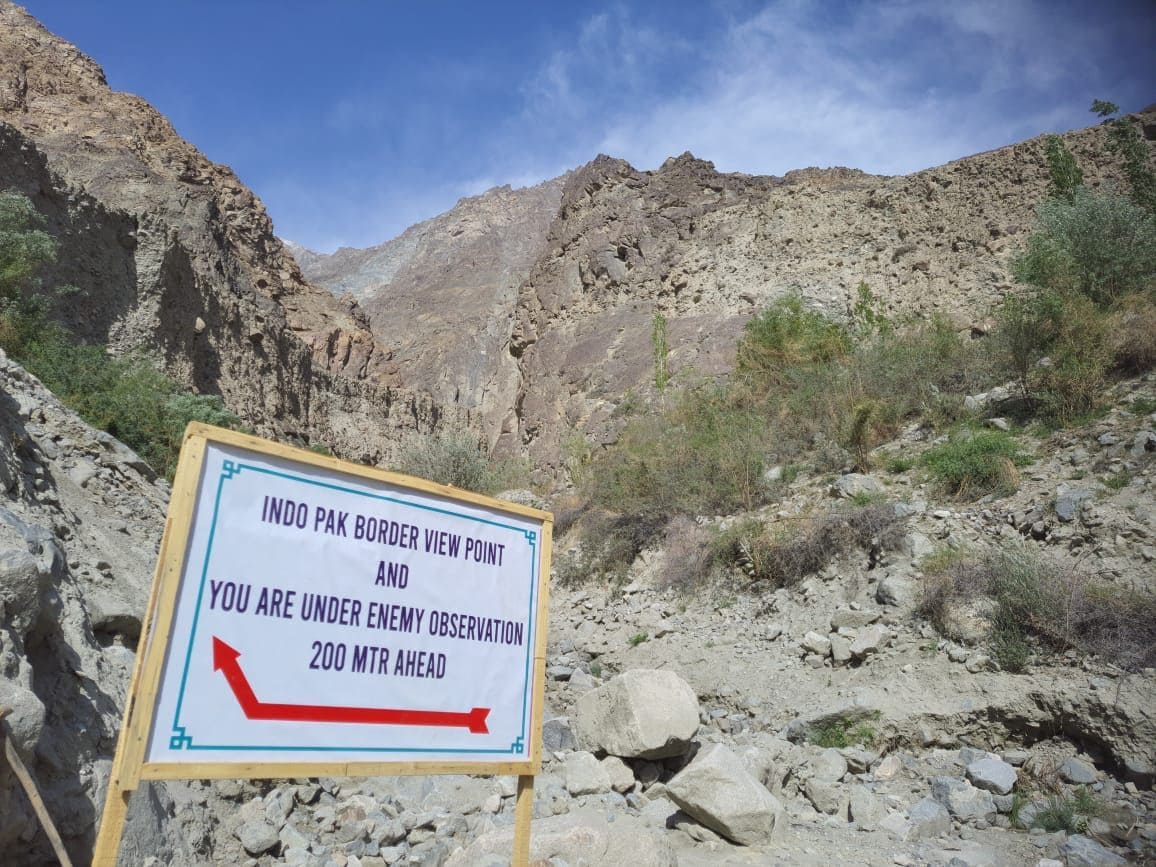 Passing through these treacherous terrain, one is overwhelmed thinking about the indomitable hard work and will of our soldiers. They have built and maintained these sky roads, braving harsh climate, hostile geography and the prying eyes of the enemy. I was filled with admiration and pride for the Border Roads Organisation (BRO), the arm under the Indian Army in charge of building and maintaining the road networks in our borders and also friendly neighbouring countries like Bhutan, Nepal, etc. Most of us are ignorant of the phenomenal work put in by the BRO soldiers who made possible our troops’ movement through impossible mountains and jungles. When disasters like avalanches or landslides strike, BRO is duty-bound to act and bring back normalcy as quickly as possible, even in the most inhospitable locales.

BRO has until now built more than 50,000 km of roads, 450 bridges and 19 airfields in strategic locations in India. It holds the Guinness world record for constructing and blacktopping the 52 km-road passing through Umling La, where the temperature goes below -40 during peak winter. BRO also has its credit for building the 9.02 km-long Atal Tunnel, the world’s longest highway single-tube tunnel above 10,000 feet. It is built under the Rohtang La in the Pir Panjal Range of the eastern Himalayas on the Leh-Manali Highway in Himachal Pradesh. The BRO motto says it all: Shramena Sarvam Sadhyam (Everything Achievable Through Hard work). Their slogan; “We will either find a Way or Make One.”

These outstanding achievements have not come easily. The sacrifices made by innumerable and unknown BRO soldiers have been phenomenal. The Wiki tells that in 2009, eight Shaurya Chakras were awarded - all posthumously - to BRO personnel for their actions in places such as Afghanistan, Jammu & Kashmir, the North East, etc. They included a bulldozer operator crushed by boulders while clearing a strategic road for Indian army tanks, two workers who died in suicide bomb attacks, an engineer and a driver in an ambush, etc.

As the biting winter had passed, many dogged cyclists and motorcyclists were seen riding through Khardung La. We were excited to see some with “From Kerala to Khardung La” emblazoned on their bikes. The youngsters from Kollam and Kannur were repeaters on their favourite trail and target Umling La next time. Our jaws dropped while passing through a totally deserted and rocky pass seeing a Malayalam line scrawled on a large boulder: “Keri Vaa Makkale!”. Yes, we recalled the story of the Malayali tea stall guy who welcomed Louis Armstrong on the moon.

Another gratifying wayside sight were the hilarious BRO billboards. Though most of them were alliterative warnings for safe driving (“After Whisky Driving Risky”), what particularly caught our Malayali eye was, “K2, India’s highest point; Kuttanad the lowest ''. It took us for a while to remember that it was about our own Kuttanad lying below sea level.

The only major “sights” on the barren Himalayas are the breathtaking monasteries. Many of them are centuries-old and have many tales to tell about the Bodhisattvas who founded them. One is awed by the effort and vision of those monks who identified these spots centuries ago to set up their serene abodes. The bored-looking monks and the visitors at the imposing Lamayuru Tibetan monastery on the Srinagar-Leh Highway atop 11520 feet were excited to meet the Bollywood action hero Tiger Shroff who dropped in during a break from shooting nearby. Even more striking was the 10 centuries-old Alchi Choskhor monastery, built by the great Rinchen Zangpo. It was adorned with stunning frescoes, giant statues of Avaloketeswara, Manjusree, and Maitreya, stupas, and wood carvings. Adjacent to the monastery is a quaint Tibetan restaurant offering delicious thukpa and momos. A ride through the sand dunes atop the Bactrian camels at Hundar too is a must in the itinerary.

Turtuk region on the banks of Shyok which holds the last Indian village is bang on the border with Pakistan. Turtuk is in the Baltistan region which was fully under Pakistan until the 1971 war when India captured some villages. Today the Line of Control divides the twin villages into the Thang on the Indian side and Pharnu on the Pakistan territory. Visitors throng the viewpoint (“last Indian village”) and a “binocular industry” thrives here renting it to gaze at the Pakistani Pharnu. The villages were separated all of a sudden by the LoC drawn in 1971 dividing families, couples, parents, and children. Stories abound here about how all husbands and wives or parents and children saw themselves living on either side and separated for ever! These heart-rending tales caused by wars and hostility between the people of the same stock give an air of melancholy to Turtuk. At Turtuk, I remembered Saadat Hasan Manto’s riveting story on the pangs of partition, Toba Tek Singh.

The little wooden summer palace (strikingly similar to a Kerala nalukett) of Turtuk’s Yagbo royalty is where its 64-year-old heir, Mohammed Khan Kacho awaits elegantly, donning the tourist guide’s role. According to him, his dynasty had ruled here for 2000 years. Their palace was taken over after the partition by Pakistan but the family fought in the Lahore court and regained it. Kacho’s young son, a civil engineer, looks after their apricot gardens and the visitors can buy “genuine royal” varieties from the palace.

Asked about the recent status of Ladakh as a new Union territory after the abrogation of Article 370, most people in Leh appeared disinterested. “We see no change. We were a border region before and now too with all its problems. For us, life is always a tough grind against nature and nothing else matters”, says a Turtuk elder surrounded by his peach-faced grandchildren.

The night was freezing at -5 degrees Celsius even in mid-May on the banks of the spectacular Pangong Tso, the world’s highest saltwater lake and the flashpoint of India-China skirmishes in early 2021. The 160 km lake shared by India and China with its blue sapphire waters looks in striking contrast to the surrounding gray mountains. The news that China was building a bridge across the lake has heated the chilly region yet again after both the troops withdrew in February last year. Another winter and may be another war too are waiting. Life never changes in Ladakh.