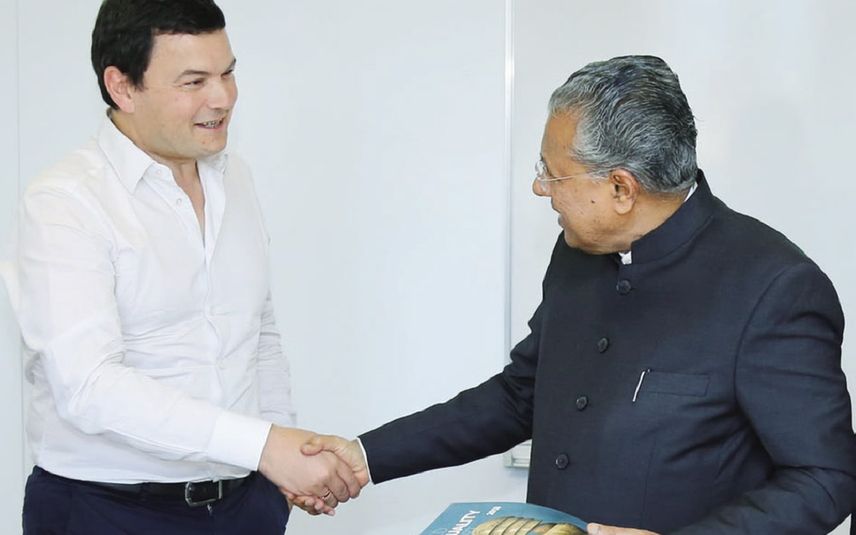 The IMF's World Inequality Report 2022 says the scourge has been spiked by the pandemic, which, while tormenting most of us, increased the wealth and income of billionaires manifold. The richest 1% of the world population’s wealth today is 190 times as much as the poorest half. Just 26 billionaires held as much wealth as half of the world’s population! According to the latest Oxfam report, the world’s 2755 billionaires saw their fortunes grow more during the Covid than they have in the last 14 years. A new “pandemic billionaire” is born every 26 hours.

But, wait a minute. It is not quite as bad as we thought. Notwithstanding the pandemic-fuelled inequality, the world, in general, is moving towards equality in the long run. And one has to trust this because it comes from the “prophet of inequality” -Thomas Piketty. The French economist, a “rock star” in global circles, is the one who most powerfully brought to the world’s focus the issue of inequality after it was dismissed as unfashionable to talk about since the new conservatism rose in the 1980s.

And as always, Piketty, the number cruncher, comes out with unassailable data. According to him, there has been a historical movement toward social, economic, and political equality since the end of the 18th century. “The world of the early 2020s, no matter how unjust it may seem, is more egalitarian than that of 1950s or that of 1900, which were themselves in many respects more egalitarian than those of 1850 or 1780,” says Piketty in his latest book, “A Brief History of Equality.” (Harvard University Press, 2022). This trend is visible in all spheres- status, property, and income across gender, race, regions, and societies. However, he underscores that despite this long-term trend, different inequalities persist at considerable and unjustified levels on all these dimensions. He also reminds us that the battle for equality and a democratic, ecological and multicultural socialism will continue in the 21st century, basing itself on the memory of past struggles, which would be the logical end of a long-term movement toward equality that has been underway since the end of 18th century. Among the number of economic historians whose path-breaking studies Piketty cites to establish his findings are many Indian scholars like Sanjay Subramaniam and Prasannan Parthasarathy.

The first milestones of this global movement towards equality are in public health and education. During 1820-2020, Life Expectancy jumped from 26 to 72, mortality of newborns fell from 20% to 1%, and literacy rose from 10% to 85%. The population grew from 600 million to 7.5 billion, and its average income from 100 Euros to 1000 Euros (adjusted for purchasing power parity) during 1700-2020. Most of this progress was made during the 20th century with the expansion of the welfare state, social security, and progressive income taxes instituted after intense struggles. This is not to deny that various forms of new and deep inequities have surfaced during this period, notwithstanding the big gains. The wealthiest 10 percent’s share in private property fell from 85% at the beginning of the 20th century to 50% in 1980 but climbed to 55% by 2020, thanks to the rise of neo-conservatism. The biggest beneficiary of this de-concentration is the middle class which emerged as a distinct class only during the 20th century and formed the 40% between the richest ten and the poor 50 percent.

The most significant drop in income inequality was registered between 1914-1980 in most of the world, including India, in different ways. The end of slavery and the emergence of the welfare state were the prime causes of the decline in the West, with the richest 10 percent’s share in total income falling from 52% to 28%. In India, the credit goes to the end of colonialism and the reservation established for the backward castes during the post-independent period. According to Piketty, no Western country has ever implemented social and racial quotas in a way comparable to what has been done in India. Reservations have benefitted about 70% of the Indian population by 2020, and the ratio between the average income of the backward sections and the rest of the population rose from 57% in 1960 to 74% in 2018. India’s record is better than affirmative action in the USA where the ratio between the incomes of Blacks and Whites rose from 54 to 56% during the period. Pointing out that reservations alone were insufficient to improve the lives of the backward sections substantially, Piketty pats Kerala and Bengal for the “agrarian reforms implemented under Communist governments with very good results” but never tried at the national level.

Was the world’s progress to equality a natural course of humanity’s progress or a deliberate consequence of Capitalism as the dominant economic and political logic for more than three centuries? Just to the contrary, points out Piketty. It was made possible only by various forms of popular resistance like revolts, civil wars, revolutions, anti-colonial and anti-slavery struggles, trade unions, multiple movements for universal suffrage, civil and human rights, peasants and workers' rights, gender equality, and also socio-political crises like depression and wars. These conflicts and mobilizations led to new institutions, power relationships, the welfare state, international treaties, social safety nets, and legal frameworks that addressed entrenched structures of discrimination and inequality.

“Without the pressure of Soviet Union and the international Communist movement, it is not at all certain that the Western property-owning classes would have accepted Social security and progressive income taxes, decolonization and civil rights,” says Piketty. The subsequent period witnessed national movements that ended colonialism, the American civil rights movement that legally ended racial discrimination (though it continues illegally), Southern Africa’s anti-apartheid struggles, the feminist and green movements, etc. Contemporary movements like Black Lives Matter, #MeToo, Fridays for Future, etc., also belong to this league.

Ending centuries-long slavery and colonialism marked the most significant push toward lessening global inequality. Piketty points out that the West’s continuing economic superiority is built not upon Adam Smith’s Capitalist ideals or technology but on the sheer barbarism of its slave-holding, colonial past. This enabled the West to grab unlimited access to free or cheap labour and the rich natural resources belonging to the colonised peoples. Without access to colonies, Western industrial development would have collided with not just a constraint of resources but a huge ecological constraint.

Piketty shows the Western colonial enterprise’s brutal exploitation, extraction of resources, and unfair protectionist measures through the impoverishment of colonial India. “Indian textiles, and especially printed fabrics and blue calicoes were madly popular in Europe and throughout the world” at the beginning of the 18th century. But as Prasannan Parthasarathy vividly showed in his Why Europe Grew Rich and Asia Did Not (2011), Britain demolished the Indian textile industry by the end of the century through protectionist measures like steeply hiking import tariffs. Similarly, slavery ensured cheap bonded labour from Africa and Asia for the West to amass its plantation wealth in the 18th and 19th centuries. Slavery and colonialism provided the West with unfair advantages in all spheres helping it to launch and reap the dividends of the Industrial Revolution and the consequent benefits.

Piketty says that the movement towards equality would be arrested if we do not guard against two significant pitfalls. One, the benefits of revolutions and consequent reorganisation of power relations will not last unless they are constantly checked and corrected through democratic institutional systems. What happened in the Soviet Union illustrated the perils of sanctifying power relationships and neglecting the importance of democratic self-correcting institutions. "The sanctification of power relationships and the Bolshevik's certainty that they knew the ultimate truth concerning equitable distribution led to the totalitarian disaster we witnessed."

Second is the message to our upper and middle classes and the media who love to hate all mass struggles: never neglect the role of popular struggles and collective resistance to keep the powder dry enough to check the forces of inequality.

Before concluding, a slight aside. Piketty’s (51) best-seller books like Capital in the 21st Century (2013) and Capital and Ideology (2019) constitute a deep dive into the world’s economic history. They revealed the depths of income and wealth inequalities among various social classes. But even as they remain the most debated and adored non-fiction works of the past decade, they also suffer from the strange predicament of many similar best sellers- they are more purchased than read! The most famed of such books is James Joyce’s 700+ page epic novel, Ulysses!

“Hawking Index” is a list of “most unread books of all time” invented in 2014 by an American professor based on Amazon e-book highlights data. Guess which one comes third in the list after Ulysses, followed by another classic, Les Misrables of Victor Hugo? Yes, Piketty’s Capital in the 21st Century! Two notches below is a book that remained on the Sunday Times best seller list for a record 237 weeks- A Brief History of Time by Stephen Hawking, and the index is also named after him.

Piketty’s latest book is as much an admission to this predicament. He writes that the book responds to a question he often encounters; “What you write is interesting, but couldn't you make it a little shorter, so I can share your research with my friends and family?”. This book is largely a summation of his three tomes, each running into more than 1000 pages, although its perspective on the long-term global movement towards equality is novel.