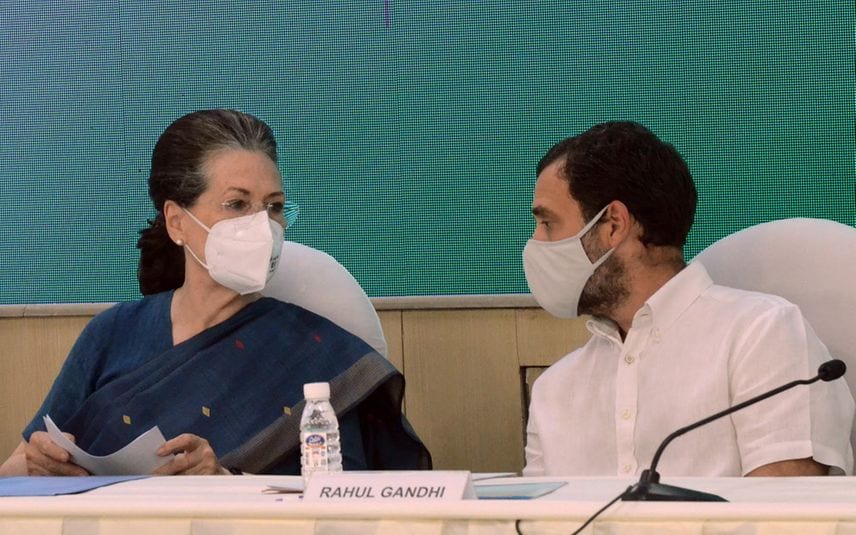 Congress, on its own, hasn't won in any of the 19 states where elections were held in the last three years | ANI photo

'Can a barren cow deliver by changing its stable?' goes a laboured translation of a famed Malayalam proverb.

Remembered this when seeing the ongoing debates on the Congress party's leadership (read Gandhi family) change in the background of its unending electoral disasters.. But the five-hour-long CWC meeting held immediately after the latest debacle didn't find anything wrong with the G-family's leadership. This was despite the widespread expectations of a 'G-23 revolt' at the meet. Instead, it was 'Ji Huzoor' all the way. But a brave Kapil Sibal, who wasn't invited to the CWC, demanded Rahul to step down. Later, the G-23 meeting held at G1's (Ghulam Nabi Azad) home also nearly expressed a similar feeling, though not in as many words.

There is no gainsaying that Congress's worst-ever electoral performances were after Rahul Gandhi's takeover as party president in December 2017. Except for the freak win in three Hindi heartland states in 2018, it has been only sob stories for India's 137-year-old Grand Old Party. After the recent rout, BJP retains 18 of the 31 states while Congress has only 2 on its own and three as a junior partner. BJP rules in 44% of India's geographical area and 49% of its population. The respective figures for Congress are 17% and 7%. Congress, on its own, hasn't won in any of the 19 states where elections were held in the last three years.

However, to be fair to Rahul, Congress hasn't declined more after he took over. When Rahul succeeded Sonia as president in 2017, Congress had only two states, and the population under it was 7%. Precisely as now! Rahul's first year was the best for Congress in recent times when its kitty grew from two to five states and population, from 7% to 21%. So, there also couldn't be a better time for Rahul to return the party on a platter in 'as was, where was' condition!

The faction loyal to Indira Gandhi after the party split in 1969 -Congress(R)- initially had a cow and its calf as its poll symbol, prompting barbs like the party being reduced to a Mummy and Me company. But, today, Congress appears a barren cow. Yet, will Congress benefit anyway from a mere leadership change? The Aam Aadmi Party has trumped BJP's and Congress's heavyweights with greenhorns like mobile phone mechanics, etc., unknown beyond their mohallas! Hence, the key is not people but policy. Unless there is a programme to impress the voter, a change of leadership would only be shifting the barren cow to a new stable. Unfortunately, none of those who clamour for change even mention the need to relook at Congress's policies.

The need to have a policy change is primarily because nothing distinguishes Congress from BJP, especially since the economic reforms unleashed by the Rao-Singh combine in 1991. With each passing day, the shift towards the Right in economic policies increased with both the Congress and BJP competing in this race. The traditional divide between the 'Right' and 'Left' in India's national politics as represented on the one side by parties led by the Congress and the BJP (earlier Swatantra, Jan Sangh) on the other, grew completely thin in the past three decades. Both the blocks are now avowedly pro-market, pro-private sector, and pro-US, unlike the days since the freedom struggle when Congress swore by Socialism, the public sector, non-alignment, etc. Even though it is a unipolar world today, when both the sellers offer wares that look the same, why should the consumer go for the second quality?

Ditto with secularism. If the old Congress swore by secularism, pluralism, communal amity, and minorities, the other camp was anti to all of them. They openly are pro-Hindu, anti-minority, and incite hatred. Congress's rightward shift in economics soon segued onto the social realm. Today, its leaders compete with the BJP to prove who is more pro-Hindu. Like in the case of economic policies, when 24 carat Hindutva is available in the market, why go for its pale version, the 'BJP Lite'?

Predicament similar to the Congress has visited centrist parties in many countries. When the British Labour party resembled too much like the Conservatives during the 2000s and declined in popularity, Jeremy Corbin turned the party radically Leftward and gained it a fresh lease. Similar was the American story when the Democrats under Clinton became a miserable Republican B-Team and got reduced to the margins, Obama appeared different and won hearts. But there was one danger lurking. The old Right returned with an extreme vengeance whenever the Left alternative failed to deliver. Keir Starmer after Corbyn in the Labour party or Trump after Obama were cases in point. Delivery had to follow policy.

Even in India, history shows that the Congress, after every crisis, zoomed back only through an assertion of its original Left credentials. Indira Gandhi's radical agenda -bank nationalization, abolition of the privy purse, Garibi Hatao- shaped by her 'pinky' advisors like PN Haksar or Mohan Kumaramangalam helped her capture the Congress party from the feudal oldies in 1969 and score a landslide win in 1971. Certainly, Indira's Leftism was only an electoral tactic. Yet, Congress has never made such a huge victory based on ideology. The big wins in 1984 and 1991 were by riding the sympathy waves over the assassination of Indira Gandhi and Rajiv Gandhi. The next elections Congress fought on the strength of an ideology was in 1996, following Narasimha Rao's historic reforms. But, despite the eulogy from the corporate world, the 'experts', and media, Congress failed to return to power.

Although the chatterati and the media were gung-ho over market fundamentalism, most Indian people continued to look for a redistributive and inclusive model, which was clear again with the 2004 general elections. The National Democratic Alliance (NDA), credited with unleashing the second wave of reforms, lost heavily, proving false the 'India Shining' claims and the psephologists. Congress-led United Progressive Alliance (UPA) won again in 2009, mainly on the strength of radical policies and acts of the UPA-1 government like the National Rural Employment Guarantee (NREGA), Right To Information (RTI), Forest Rights (FRA), etc. Thanks to the crucial Left support and Sonia's inclusive politics, Manmohan Singh couldn't push his passion for the market during the UPA-1 period. But all his pent-up madness rose during the UPA-2, unburdened by the Left. The apocalypse was waiting to happen in 2014. Congress was smashed into smithereens. It has never looked up since. The devastation is to complete a decade, with the next elections of 2024.

Modi and Co think 2024 is a done deal. It could well be. But, the recent results, which appear like a BJP show, may not be actually so. The saffron dominance has been halved from 2018, which is not duly noticed amidst Congress's rout. The states under BJP have fallen from 21 to 17, territory from 76% to 44%, and population from 70% to 49.6%. As the AAP's triumph in Punjab shows, the ordinary Indian is ready to back any credible alternative, unmindful of religion, caste, region, or even leader.

No Congress leader has even started looking at the Indira playbook despite the repeated shocks. Kanishk Tharoor, the journalist son of Shashi Tharoor, wrote in 2017, 'India is neither the US nor the UK, and the Congress doesn't need to take its marching orders from trends elsewhere. But it seems clear now that fighting the BJP at the level of identity is not working; the lofty rhetoric of pluralism can't compete with Hindutva. Shifting away from culture to the economy by taking a principled left turn may help right the ship'.

Thrikkakkara is famed for Kerala’ s only ...