Sachi is compromising with Brahmanical patriarchy while Jeo Baby is questioning it subtly and incisively. The current political class, which wields power, demands this compromise. That is why the national awards go to Ayyappanum Koshiyum while The Great Indian Kitchen is rejected outright. 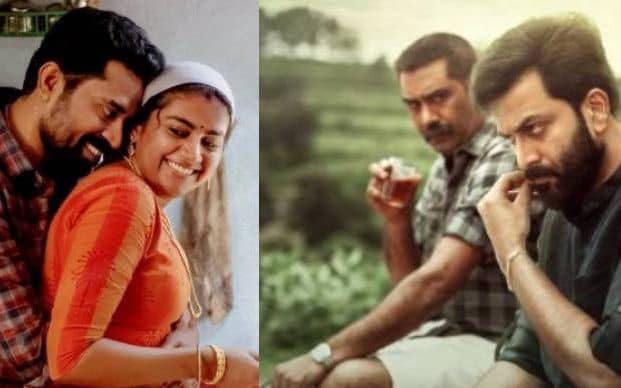 The beginning of this column demanded a conversation with Jeo Baby, the director of The Great Indian Kitchen. There was confusion if the Great Indian Kitchen ( GIK) was indeed submitted for the national film awards this year. GIK was released in January 2021 and most of the films that received the awards including Ayyappanum Koshiyum were released in 2020. The confusion was removed by Jeo Baby himself. He told me that GIK was cleared by the censor board in 2020 and his film was very much there for consideration for national awards this year. The jury rejected GIK and chose Sachi ( director of Ayyappanum Koshiyum) as the best director. There is a gross injustice here. Ayyappanum Koshiyum had been a crowd puller. It was a runaway success in theatres. But that doesn't make it greater than GIK. The following note of dissent is born out of the feeling that Jeo Baby has been denied what is due to him.

Adukkalyil Ninnum Arangathekku (From the Kitchen to the Stage) and GIK are two films of supreme significance when we explore the history of the emancipation of women in the last hundred years in Kerala. Sri Narayana Guru died in 1928. Adukkalayil Ninnum Arangathekku, written and directed by VT Bhattathiripad was staged one year later in December 1929. VT has written about the first staging of his drama at the courtyard of Vadkkiniyedath Illam in Edakkunni. EMS, who went on to become the CM of the first communist ministry in Kerala, was there with VT backstage on that historical day. The Namboothiri women saw the drama that dealt with their own lives while sitting in the house. ''EMS was so elated that he started jumping up and down hugging me,'' writes VT.

Neither VT nor EMS is now here to witness the way GIK is tearing apart the Brahmanical patriarchy. If they were alive they would have been overjoyed at the sight of what Jeo Baby has achieved. The craft and content of GIK may not be digestible to those who wield power in contemporary India. No other film has explored the layers of Hindutva this deeper in recent times. The title itself is a telling critique of the hypocrisy of the Indian Patriarchy.

The heroine enacted by Nimisha Vijayan in GIK doesn't have a name. She is the representative of the women the Indian patriarchy sacrifices within the four walls of the kitchen. Jeo Baby is tearing apart the concepts of purity and impurity which are endorsed by the Brahmanical patriarchy, with the precision of a clinical surgeon. The women have to bear the impurity of the kitchen to keep the male pure. Kancha Ilaiya has pointed out in his book ' Why I am not a Hindu? A Sudra Critique of Hindutva Philosophy, Culture and Political Economy' that it is Brahmanical patriarchy that makes it mandatory for the women to clean the kitchen and wash the kids in order to keep the upper caste male always pure.

Purity and impurity don't come out of a vacuum. They are very much here in the midst of our lives. Just like all other facets of life these two also have their own politics. TM Krishna, the renowned musician, narrates one such incident in his book ' Sebastian and Sons: A Brief History of Mridangam makers’: ''There might have been a trigger to the existential crisis that Mani Iyer confronted. Alkattan, Parlandu's [who ruled the mridangam making industry] cousin, was considered an expert at choosing skins and made very good varus. I have not been able to ascertain how exactly Alkattan is related to Parlandu. In such situations, the English generality 'cousin' always comes to the rescue. Iyer gave Alkattan a job. He said he wanted top-draw cow skin, no compromises and the cost did not matter. Alkattan said it would cost Rs. 100. Iyer gave him that amount immediately, in advance, and headed out to a restaurant around 3 or 4 p.m. When he returned, he found Alkattan standing outside his house, cow in tow. Iyer was startled, to say the least. Alkattan informed him that this cow had great skin, but the seller wanted Rs. 120, so he wanted to check with Iyer before completing the transaction. Iyer was shocked. Almost certainly, this would have been the first time he had to make a decision on the slaughtering itself, and take responsibility for something that was thus far hidden. He just shooed Alkattan away and demanded that he take the cow with him. This incident from Iyer's life is a universal condition - I am certain that no mridangam artist would like to be placed in a similar situation. Skin just drops down from the heavens, as far as they are concerned.''

Mani Iyer later shares this predicament with Rajaji. ''Rajaji, as he was known, gave him a pragmatic answer by quoting a proverb: 'Don't look for the source of a river or the antecedents of a saint'. In other words, he asked Mani Iyer not to seek difficult answers. How convenient! It is the maker who plays the role of an intermediary for the artist, veiling the origins and allowing the latter to seek comfort in such a proverb.''

This is some kind of hide and seek. There is inbuilt duplicity in it. Jeo Baby doesn't run away from realities like this. He encounters Brahmanical patriarchy in its den. His film never compromises with patriarchy in any way. There is a scene where the father-in-law reminds his daughter-in-law, who wants to pursue a career as a dance teacher. Brahminical patriarchy doesn't have any consideration for the education and career prospects of women. To them, she is just a tool to sustain the race by burning herself out both in the bedroom and the kitchen.

The protagonist enacted by Nimisha in the film encounters patriarchy by throwing the wastewater in the kitchen at her husband and her father-in-law. This is what is called 'Ushnam ushnena shanti!' The process where pollution is countered with pollution. For the heroine, this is not a journey from the kitchen to the stage. She is moving to the beautiful, ever-vibrant pastures of life. The film becomes the manifesto for the liberation of women. Jeo Baby is exposing the exploitation and injustice that take place before us on a day-to-day basis. It is this exposure that the national films award jury pretends not to see.

One of the heroes of Sachi's film has no issues with assaulting his wife for the abuses of his father. The other hero finds it easy to tell the police officer on being informed that he could keep his child with him instead of sending her along with the mother into the prison, that the mother is the best person to look after the kid. Both the heroes of Ayyappanum Koshiyum are the exhibition halls of patriarchy. The fact that the jury prefers the films that endorse patriarchy to those that question the same, uncovers the reactionary politics that they pronounce allegiance to.

There is hypocrisy even in the very title 'Ayyappanum Koshiyum'. The Kerala society has so far heard only the name of Vavar along with Ayyappan. Ayyappanum Vavarum has been the image that the Malayalis have cherished for quite a long time. But when a filmmaker like Sachi plans a film he chooses the name Koshy instead of Vavar. Has it something to do with Vavar's identity as a Muslim? The current political scenario in India tells us that BJP, the ruling party, doesn't have a single MP or MLA either in parliament or in any of the legislative assemblies in the nation. It is this political perspective that Sachi is upholding in his film. While Jeo Baby is questioning Brahmanical patriarchy subtly, Sachi is compromising with it brilliantly. The current political ruling class demands this compromise. This is a class interest. The interest is in conflict with liberty, equality and fraternity. It is in this political context that Jeo Baby's film is blacked out and Sachi's venture is accepted.

It is important to recall the review of GIK in Livewire by Mythily Nair. The review that is titled 'A working mom reviews GIK' is basically in the form of a conversation between a mother and her daughter. Mythili's mom saw to it that she got post-graduation and employment even after her marriage. Mythily asks her mother towards the end of the review what she has to tell finally about the film. The mother's response is this: ''The reviewers are right. It's an absolute must-watch. it's a must-watch because it's putting up a very jarring mirror to existing structures, and it's a must-watch because it will make a lot of people uncomfortable. Cinema needs substance - such storytelling needs space because cinema like this can change the way you think.''

Jeo's film is a mirror that is being held in front of us. We see ourselves in that. It is a disturbing view that makes us uncomfortable. But Ayyappanum Koshiyum presents a procession of illogical jarring images. A police inspector like Ayyappan Nair can only be seen in a banana republic. It is another factor that Biju Menon has made Ayyappan Nair unforgettable with his superb acting skills. Biju Menon's acting doesn't make Ayyappanum Koshiyum a great film. It is just like Mammuty's acting in 'Puzhu' doesn't turn it into a classic film.

The national film awards are sponsored by we the people. It is funded by the tax payments that we make. That is why it becomes our responsibility to question the jury when they do injustice to a filmmaker like Jeo Baby. If one is asked to name the five great films in Malayalam, GIK will definitely be on that list. But Ayyappanum Koshiyum won't be there in a list of the best 50 Malayalam films. The first Malayalam film was released in 1930. That means the centenary of Malayalam cinema is just eight years away. When we take stock of Malayalam films in 2030, Jeo Baby will have the last laugh.

When the jury rejects 'The Great Indian Kitchen' and honours 'Ayyappanum ...

On 30th May, the eve before the Thrikkakara ...

There is an interesting remark by Sonia Gandhi ...