RSS will have the last laugh when the choice is between BJP's Hindutva and the Hindutva of AAP. The Sangh is slated to  celebrate its centenary in 2025. The parivar won't be able to hide its excitement and joy when it sees that by the time it reaches the milestone of hundred years of existence, the agenda before the nation is Hindutva all the way! 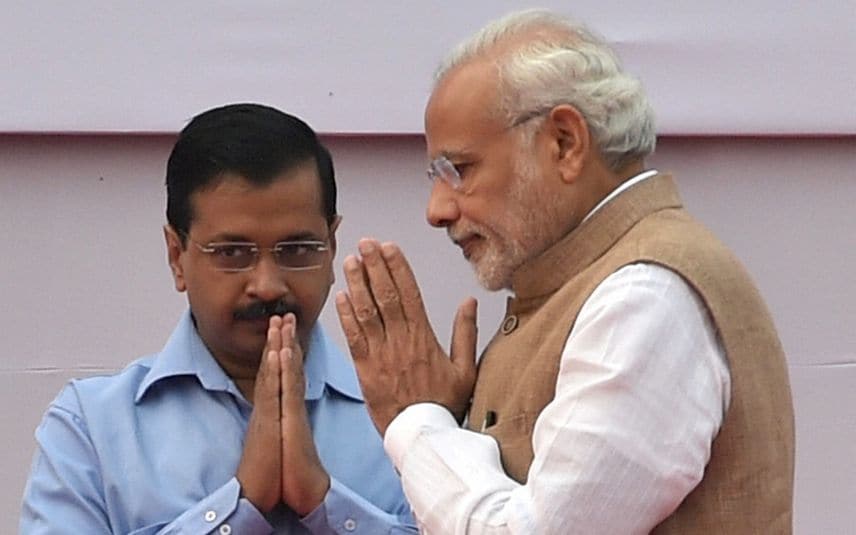 Arvind Kejriwal, the supremo of Aam Aadmi Party ( AAP) made a remarkable statement in October 2022. ''I have written a letter to the Prime Minister, and have requested him on behalf of 130 crore Indians that the Indian currency notes should have photos of Lakshmi and Ganesha apart from that of Mahatma Gandhi,'' Kejriwal said in a tweet in Hindi. According to Kejriwal, this would enhance the value of the currencies, which in turn would result in a stronger economy. Prime Minister Modi, who is described by his followers as ‘Hinduhridaysamrat' has not responded to this demand so far. This is not the first time that such a demand is raised. Subramanian Swamy, a prominent leader of BJP, had demanded the same two years back. Even then Modi kept silent. This article is not on Gods and currencies. AAP was formed on November 26, 2012. Let us examine what message is sent across by Kejriwal and AAP as the party completes 10 years in the Indian political arena.

AAP was born out of the battle cry against corruption. The second UPA government under Manmohan Singh was submerged in scandals after scandals. 2G, Commonwealth Games and Coal mine scandals shook the Congress-led government to the core. It was against this backdrop that India Against Corruption (IAC) was formed to mobilise people across segments to take on political corruption. There are allegations that RSS was behind this formation. The observation was that the instant popularity of this movement which had its mascot as Anna Hazare, the Gandhian, was because of the intervention of RSS, the most well organised non political organisation in India.

Narendra Modi was then just beginning his journey to the capital of India. The UPA government was losing its appeal, BJP was getting ready to anoint the new leader and Kejriwal smelt an opportunity. He didn't waste much time in converting IAC into a political outfit. Within one year of the formation of AAP, Kejriwal became the Chief Minister of Delhi. He announced his entry into the Indian political scene by defeating Sheila Dikshit, the foremost leader of Congress in Delhi by a margin of 25,864 votes.

Kejriwal's initial fight was against corruption of the Congress-led UPA government. But that didn't prevent him from accepting the Congress' support from outside to sustain his ministry. The celebration of power didn't last long. Kejriwal had to resign when he failed to get the Jan Lokpal Bill approved by the assembly. Kejri caught the attention of the nation when he took on PM Modi in the Varanasi Lok Sabha constituency. Eventhough, he couldn't defeat Modi, Kejri gained the image of a fearless fighter. This image was his capital when AAP faced the assembly elections in 2015. It was a massive mandate in favour of Kejriwal and his party. AAP scored victory in 67 constituencies out of 70 in Delhi.

There began the transformation of Kejriwal from the idealist to the opportunist. Jan Lokpal and the fight against corruption were no longer the priorities. The realisation dawned upon Kejriwal that the real power lies with the central government and not with the Delhi administration which he was in charge of. When he looked deeper, he didn't see the India of Gandhi, Nehru and Ambedkar. He saw the map of India which was polarised by the divisive forces along communal lines. He saw how RSS was planning to construct its own India by 2025. This is the India that Savarkar, Hegdewar and Golwalker dreamt of. Maybe by default, Kejriwal too began fixing his gaze on the same India. The pilgrimages to Ayodhya and the demand for inclusion of Lord Ganesha and Goddess Lakshmi on the Indian currency are the manifestations of this goal.

According to Prashant Bhushan, one of the co-founders of AAP, IAC was the holy mass offered at the altar of RSS. ''In hindsight, there are two things that I regret. One is not seeing that the movement was to a large extent supported and propped up by the BJP- RSS for their own political purposes to bring down the Congress government and get themselves in power,'' Bhushan was speaking to India Today's Rajdeep Sardesai. ''I have no doubt about it (RSS-BJP role) today. He (Anna Hazare) was also probably not aware of it, Arvind was aware of it, I have very little doubt of that. The second regret that I have is not having understood Arvind's character earlier enough. I understood it too late by which time we had actually created another Frankenstein's monster so to say.'' Let us recall here that one of the first acts by Kejriwal after assuming power in 2015 was the expulsion of Yogendra Yadav and Prashant Bhushan from AAP.

Arun Shourie, former editor of Indian Express, had referred to Congress as BJP without the cow. One doesn't know if Shourie would say now that AAP is BJP way above and beyond the cow. AAP favoured the bifurcation of Jammu and Kashmir, and the neutralisation of Article 370. The silence of Kejriwal in the wake of the Delhi riots was deafening. The later deeds of Kejriwal proved that this silence was not at all a coincidence.

What is the relevance of a BJP B team when the BJP A team is very much active? We should remember that the games played by a janeudhari brahmin 'Rahul Gandhi' have not taken Congress anywhere. Maybe Kejriwal is looking towards a post-Modi India. Maybe he is planning to be anointed as the next Hinduhridaysamrat, outsmarting Amit Shah and Yogi. If Captain Amerinder could join BJP, if Nithish, Mamata and Karunanidhi could hold the hands of BJP, Kejri too need not have any qualms over entering the saffron camp.

Prabhat Patnaik's observation that BJP is led by the formula which combines the corporates and communalism, is equally applicable to AAP. We shouldn't forget that AAP has chosen to ally with Twenty20 led by Sabu Jacob, the managing director of Kitex in Kerala. If BJP has the blessings and support of Adani and Ambani, then why can't AAP go with Sabu Jacob? These questions are ironic to the core since India still claims to be a democratic country.

Kejriwal has taken a political stand that resembles the Hindutva ideology propagated by RSS. Think of the farm laws which were passed in parliament without any consultation with the stakeholders. Even though the farm laws had to be withdrawn in the wake of stiff opposition, it is very much obvious that the economic policies of the Modi government have been very much corporate friendly. It shouldn't be forgotten that the Modi govt can't even think of reducing the corporate tax.

Just like BJP, AAP too aims at a Congress mukt Bharat. AAP is intensely looking at the vote bank of Congress, be it Punjab or Gujarat. It thinks that it can replace Congress in Gujarat if it polls at least 15 % of votes in the state. It was Gandhi's martyrdom that built the foundation of secular India. India refused to toe the line of the theocratic Pakistan because it could realise precisely the true value of Mahatma's sacrifice. Rajendra Pal Gautam, the social welfare minister in the Kejriwal government, had to resign in October 2022. Why was he forced to resign? He participated in a Buddhist function which saw hundreds of Hindus being converted into Buddhism. BJP portrayed this as an anti-Hindu activity and shouted for Gautam's resignation. The Indian constitution guarantees that the citizens have the right to proclaim any faith. But still, Kejriwal yielded to the BJP pressure and Gautam had to resign.

Kejriwal had instructed earlier that all the government offices in AAP ruled states should have pictures of Ambedkar and Bhagat Singh only. Ambedkar renounced Hinduism and joined Buddhism on October 14, 1956. Sitting under the portrait of the same Ambedkar, Kejriwal had no qualms in ousting his colleague for participating in a Buddhist function. This is the way Kejriwal walks his talk!

AAP had a magnificent start. It was the darling of the masses who were fed up with the Congress. It was hope incarnate. It was fresh air and fresh water. It heralded the arrival of idealism once again. Caste politics appeared to be giving way to the politics of idealism. Yogendra Yadav, the then ideologue of AAP, had pointed out that AAP was the party of the common man and the goal of the party was to enable the common man to lead a life of dignity. But common man is a vague concept.

Common man can be represented by the migrant labourers, who sweat it out on the streets of Delhi and workers in private enterprises, who get very meagre income. The invention of the Modi government that a person can be considered economically backward if his yearly income doesn't exceed Rs 8 lakhs per year makes the terrain of the common man complicated. The question is who represents AAP's common man. A party can face the elections with vague, ambiguous mottos. But the moment the party assumes power, the chickens will come home to roost. AAP did bring in some noticeable changes in the fields of education and health care.

But, power is an ocean. An ocean of temptations. Most of those who swam in this ocean have been drowned in the whirlpools of temptations. AAP started to clean the society with a broom in its hand. It was quite symbolic indeed! But the party has now begun to forget the purpose of the broom as it is completing ten years in its journey. Corruption and Lokpal have become old, outdated chapters. AAP has found to its contentment that majoritarianism is a better tool to hold together and expand its vote bank. Of course, it will bring dividends to the party. But, the party is definitely walking backward in terms of democracy and progressiveness. It foreshadows the shrinking spaces of democratic discourses in the country.

RSS will have the last laugh when the choice is between BJP's Hindutva and the Hindutva of AAP. The Sangh is slated to celebrate its centenary in 2025. The parivar won't be able to hide its excitement and joy when it sees that by the time it reaches the milestone of hundred years of existence the agenda before the nation is Hindutva all the way!