May 10, 1857 marked the beginning of the first major uprising against the British which began in Meerut, spread through most of the Gangetic plain and ended exactly 13 months later.

Particularly since the Indian `rebels’ were eventually overthrown and British imperialism opened full throttle with the Crown replacing the corporate militarization of the East India Company, any `native’ protests in the form of books, journals and speeches against the British were dealt with brutally. At the most, a satirical play or a coded poem was all the writers and printers of India dared to circulate.

Fifty two years later, in 1911, something happened. A memoir-cum-travelogue of the revolt, and the fall of Jhansi was published in Marathi. The author was no more but he had entrusted two publishers his work in case one of them was unable to publish or elected to withdraw from the responsibility. His instructions were to publish the account after his death. The book Mazha (Majha) Pravaas is the only `native’ eye-witness account of what happened and it is surely to be believed because there is no politics or slant in the telling since the author of the work sought no prominence or eminence. There was no romance or particular style either because the drama lay in the mere telling. In fact the author, Vishnubhatt Godse was a man who had never even considered himself a writer.

Godse who wrote his memories on the fall of Jhansi 27 years after the event was an impoverished priest who had set out from Versai-- a village in the Kolaba district-- to make his fortune conducting poojas and other ceremonies on the road to Kashi. On the way he had planned to stop at Gwalior where the Rajmata had announced a 7 lakh yagna and continue on to the fortress of Jhansi where Rani Lakshmi Bai was known to be very generous to Brahmins and pious scholars.

What happened was that he and his uncle walked slap bang into the route taken by the rebels.

Interestingly Godse and his uncle who accompanied him had some concerns about being viewed as dark-skinned “Southerners” as they journeyed northwards! And here is the parting advice of Godse’s father: “In Hindustan they distribute and drink bhang and the women there cast a spell on men. ….” There was no sense at all of being part of a larger collective ‘Indian’ race.

Godse had a series of ‘adventures’ both ways and on his return home (1859, nearly dying, more than once) which he was encouraged to document. Edited and revised by historian friends and publishers, Mazha Pravaas is part travelogue, part autobiography, part history.

Our author recorded some hilarious truths about Indian rulers and rajas, the brutalities of our first bid for freedom from the British, the manner in which it was suppressed, and his perilous return in this book which he was particular to not categorize as a novel though many things read as if it were fiction. Here is a description of the last Raja of Jhansi who eventually married Chhabeli (renamed Lakshmibai the famous Rani of our history) and was rumoured to be a eunuch.

“Every now and then in the upper apartments of his palace, he would cast off his male garments and dress like a woman. He would drape himself in a Paithani saree, and put on a blouse that had zari-bordered sleeves. He had grown a very long tuft of hair, and to that he would add some artificial hair, oil it with fragrant oil and plait it into a long braid. …he used to wear all types of jewellery including a ball-shaped head pendant. ….Each month this Raja would sit aside for three days like a woman during a period, and bathe with great ceremony on the fourth day. …even though he got up to such antics, the Raja ruled in a just and reasoned manner.” When he was criticized by the British resident for wearing bangles he replied “In the presence of the British all the warriors of my land should sit like women and wear bangles.” 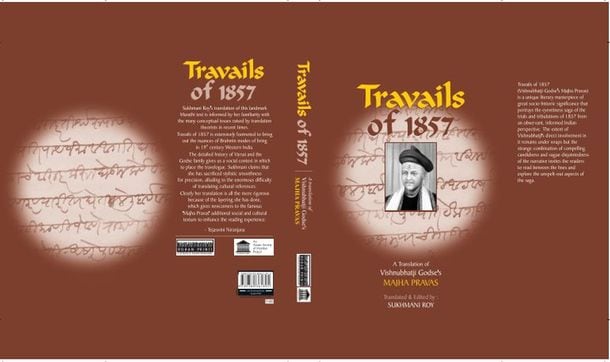 The fall of Jhansi makes ---even today--- very sad reading. “The city, as seen from the ramparts of the fort, now appeared to be utterly destroyed. The area from Halwaipura onwards was on fire. Horses, elephants, bulls, cows, buffaloes, donkeys, mules and dogs were wandering the streets bellowing for water and food. Hundreds of corpses lay in the streets, and the city was a horror to behold. The white men had continued their slaughter till sunset…” (all quotations from Priya Adarkar and Shanta Gokhale’s translation OUP 2014)

A hundred years after the Marathi publication three English translations of it appeared in quick succession. In 2011, HarperCollins published an abridged version of the work translated by Mrinal Pande, titled 1857, The True Story.

A year later Godse’s great-great-grand-daughter Sukhmini Roy published her translation through Rohan Prakashan, titled Travails of 1857. In 2014 Oxford University Press published a third translation with a descriptive title : Adventures of a Brahmin Priest : My Travels in the 1857 Rebellion. It was indeed about how the travels of a priest turned into an adventure, a patchwork of pujas, court patronage and miraculous escapes from both battles and dangerous confrontations with desperadoes on the loose.

The account is both comical ( "there was no tobacco to chew") and philosophical (attributing defeat to the killing of Englishwomen and children---“war upon women is not …in the Vedas”). Godse concludes, “Thinking about our travels, I have realized that earning money is a difficult thing.”

Anybody, both in and out of a war zone, would agree with that sentiment.

May 10, 1857 marked the beginning of the first major uprising against the British which began in Meerut, spread through most of the Gangetic plain and ..

A particular experience haunts me. During the Vinayaka Chaturthi celebrations (festival of Lord Ganesh) in Vizianagaram in 2003, a child fell into the ..

"Are you guys reading poetry? If you aren’ t –every day—you shouldn’ t even be here."(Jerry Pinto at the Ooty Lit Festival, 2017)One of the natural functions ..

From the clay tablets of ancient Mesopotamia to the legendary libraries of Alexandria, from the burned scrolls of the Qing dynasty to the book pyres of ..