Synthetic womb sounds like a technological breakthrough, but we should think twice about progressing that far. 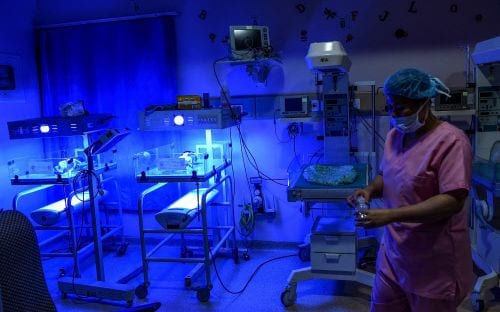 A nurse walks next to premature newborn babies at a hospital in New Delhi | Photo: AFP

In Mahabharatha, Gandhari stays pregnant for two years and finally delivers a mass of flesh. But luckily, Sage Vyasan arrives at the scene and saves the day.

He divides the flesh into 101 pots filled with ghee, and presto, Gandhari’s wish to get 100 sons and a daughter is fulfilled.

The technique that Vyasan used to grow the babies outside a womb would have been in great demand if it was available now as countries across the world are facing a shortage of babies.

In countries like Japan, it has already started to have a telling effect, while the world’s most populous nation, China, is slated to have a labour shortage in a couple of decades as the effect of its drastic one-child policy lingers on. India, poised to overtake China as the most populous nation by 2027, has also reported a fall in the fertility rate in 2021.

The rise in education and income level of women has made a sizeable section of them, especially in developed countries, question their traditional child-bearing role. Even in poorer regions, especially in Asia, women rebel against being chained to domestic duties and treated as baby-making machines.

The falling birth rates are fuelling talks about using technology to overcome this hurdle, and research is advancing fast.

The artificial womb, or “long-term embryo culture device,” is a container where they have mouse embryos growing in a line of cubes filled with nutritious fluids, a report said. The device can pave the way for a technology that could eliminate the need for a woman to carry her baby, it added.

This report came a few days after Silicone Valley superstars set off a Twitter chatter about synthetic wombs to tackle falling fertility rates and gender bias in salaries. Tesla chief Elon Musk started it when he expressed his worries about falling birth rates.

Musk, whose long-term ambitions include colonies on Mars, may have been more troubled by how that could affect his plans.

“If there aren’t enough people for Earth, then there definitely won’t be enough for Mars,” he said in the tweet.

Soon after Musk (@elonmusk) posed this question to his 72 million Twitter followers, Ethereum cryptocurrency founder Vitalik Buterin (@VitalikButerin) tweeted out his suggestion for the looming problem: synthetic wombs that will make child delivery easier and also solve gender pay disparity which is a hot button issue in the Silicon Valley.

Studies have shown that women’s earnings decline after a pregnancy break, whereas parenthood does not affect men. As a result, allegations of gender discrimination have swirled around in almost every hi-tech company in Silicon Valley.

Buterin did generate anger among a sizeable section of his 3.2 million Twitter followers, but he also found some measure of support, including from some heavyweights in the tech world.

“We should be investing in technology that makes having kids much faster/easier/cheaper/more accessible Synthetic wombs, etc.” tweeted Sahil Lavingia, (@shl) founder of @gumrod – an e-commerce company – who has a quarter-of-a-million followers.

Some notable women from the world of technology also joined on both sides of the argument. Sonal Chokshi (@smc90), one of the brightest with an outstanding track record in Silicon Valley, tweeted this: “The current procreation is something humans have been doing for “kajillion years” and “it should be as “I-can’t-believe-we-once-did-it-that-way” as anything else.”

Another cyberworld star, Balaji Srinivasan (@balajis), also tweeted out his view, saying the opposition and claims of tinkering with the nature claims were there when scientists were testing artificial insemination methods.“Millions of families for whom IVF was the only chance to have a child are glad they did,” went his tweet.

It is not that some whiz kid is sitting in a garage right now would have a synthetic womb prototype next year that will let men and women avoid long pregnancy, delivery, pre and post-natal issues; even the tremendous headway made by Chinese scientists may be years away from actual childbirth. But scientists are showing it could be a possibility.

Technology’s problem is that its proponents cannot always predict all of the issues it will encounter, as the communication revolution had shown when it became weapons in some hands.

The report of experiments with AI-run artificial womb did raise some troubling questions in China, where surrogacy is banned. Births using a machine would turn hospitals into parents, said one researcher.

“If everyone is born this way, fair enough. But if some children are given birth to by parents, and some by the government, there will be a big problem.”

The very thought of government producing babies itself is a dystopian nightmare, given the kind of people who run some countries.

The idea of a contraption that could save prematurely born babies sounds good. But if it extends to synthetic wombs that could end up as baby-producing factories, it is time to cry halt.

When technologies that alter fundamental activities are mooted, it needs a well-rounded discussion about its pros and cons instead of just a group of experts in white coats conducting experiments in a lab or a bunch of well-heeled people brainstorming on it.

The falling birth rate is a complex issue that technologies like a synthetic womb may not resolve.

The rise in education and income level of women has made a sizeable section of them question their traditional child-bearing role. In a world where everything is measured in terms of money it generates, the values get skewed about issues like child-rearing and maternity care.

That is the issue to be solved to fix this problem, though it is unlikely to have a smooth passage as it will weaken the structure of many male-dominated societies, which burdens women with all domestic chores.

Technology to help grow babies outside a mother’s womb could look like a logical answer to whiz kids in Silicon Valley debating gender disparity in wages. But the far-reaching effects of such a step conjure up some troubling thoughts.

It didn’t end well when Vyasan tried it, either. Read the Mahabharata if you don’t believe me.